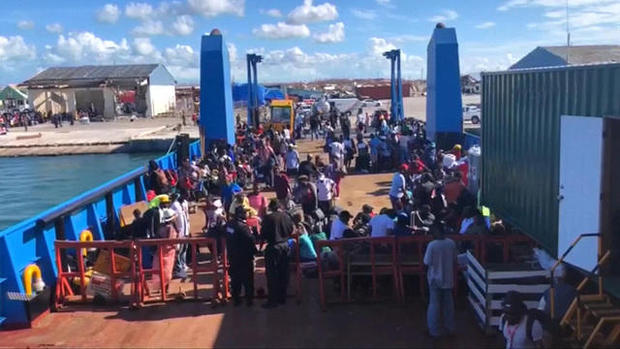 In what is a growing humanitarian crisis, the United Nations says some 70,000 people in the Bahamas are in need of food and shelter, after Hurricane Dorian slammed the islands. The death toll has risen to 45, as officials continue to comb through miles of debris, trying to account for hundreds of missing.

Thousands of survivors are scrambling to escape areas destroyed by Dorian. Government officials say they've evacuated about 3,500 people to Nassau, which was largely untouched by the storm.

The desperation to escape the devastation is rising. Over the weekend, thousands waited to board boats and planes headed to Nassau or Florida. Before a ferry left for Florida overnight, one reporter captured video of the crew ordering evacuees without a U.S. visa to disembark.

CBS NewsIn an interview overnight, U.S. Customs and Border Protection officials in Florida blamed the ferry company for ordering certain evacuees off the boat. A CBP official said they would have processed those evacuees in Florida, just like they did with 1,500 Dorian survivors from a cruise ship that arrived Saturday.

Many Bahamians have expressed frustration about the government's slow response here. That's where local agencies, as well as the U.S. Coast Guard and Customs and Border Protection, have stepped in to help.

On Sunday, correspondent Errol Barnett joined 30 firefighters from the city of Miami and Miami-Dade County as they searched for victims on Grand Bahama Island, and delivered aid to the stranded.

In the middle of devastated mangrove trees, Barnett spoke with resident Eva Thomas, staring into the distance, holding a shovel; debris was piled up outside her home. "This is your whole life right here," Barnett said.

"Right there, everything gone in one time," Thomas said.

Randy and Sylvia Nagy rode out Dorian in their beachside house. They used a first responder's satellite phone to call their daughter for the first time since the storm, bringing a sigh of relief. "Give the kids a hug and kiss," Sylvia said.

"It was good to hear her, after not talking," Randy added.

Amid the devastation, some people are refusing to leave the only place they've ever called home, even as food and water are scarce.

Nikki Battiste traveled to Abaco Island Sunday expecting to see lines of survivors trying to evacuate. But what she found was very few people left on the part of island she visited – and some of them do not want to leave.

Ninth-generation Bahamian William Malone Sr. says he's been through 14 hurricanes, but has never seen loss like this. He told Battiste he survived by hiding inside a closet as the category 5 storm tore through.

"All of a sudden I hear boof! The doors bursted through," he said. "I had a comforter and four pillows on me and my girlfriend. Then as soon as we got in there, the bedroom roof, whoop! Then all I could see was sky."

"Did you think you were going to die?" Battiste asked.

Malone said that during the hurricane, water surges of at least 30 feet swept away some of his neighbors.

He then took Battiste inside the rest of what's left of his home of 19 years. He's trying to salvage his possessions, including family pictures. All of his family has been evacuated, but he's still here.

"Yes, this is my home. This is paradise. Sometimes it ain't, but most of the time it is. And you've got to take the good with the bad," he said.

For the people still here, it seems there is nothing left. Homes, schools and businesses, including stores and gas stations, are completely destroyed. Some buildings have been searched for bodies, but there are still many people missing or presumed dead.

As Battiste drove around Marsh Harbor, surrounded by rubble, she met a man and his two-month-old son.

Their home is gone, so they're seeking shelter in an abandoned home that still has a roof. They have no food or water.

"Are you worried about surviving?" Battiste asked.

A relief worker on Abaco Island said more than 100 children that had been sheltering in a school were finally evacuated to Nassau. Some evacuees have family there, but others are in shelters, hotels and private homes that have been offered by complete strangers. 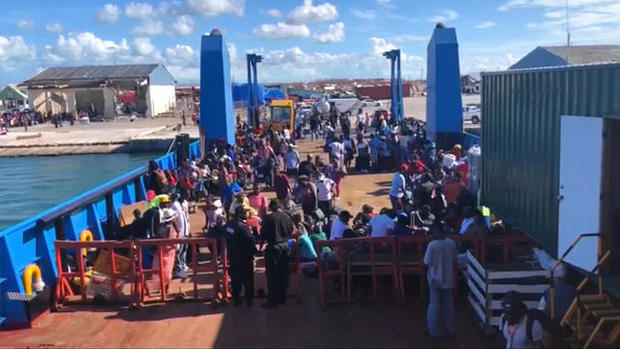 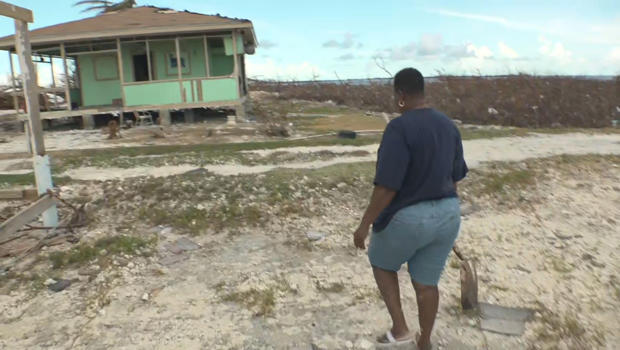 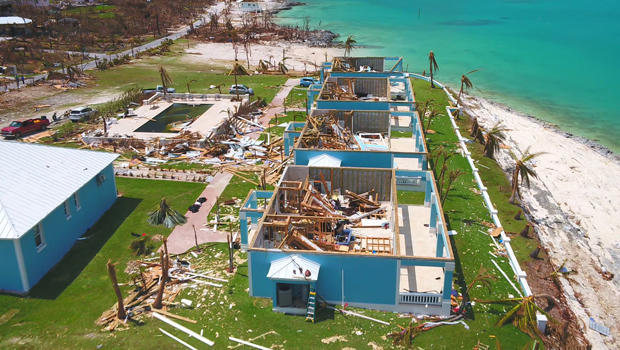