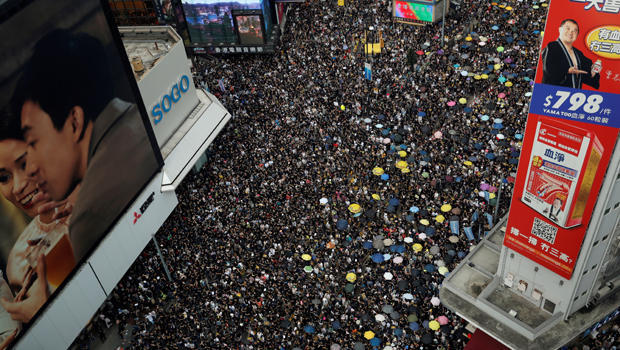 The people of Hong Kong have taken to the streets again this weekend to protest mainland China's effort to roll back its freedoms. What is it all about? We asked Ramy Inocencio to file this Sunday Journal.

From peaceful protests, to firebombs and gunshots, this has been Hong Kong's summer of discontent.

"If we don't fight there's no future for us," said Hong Kong entrepreneur Jimmy Lai. Smuggled out of China at the age of 13 in a fishing boat, he's now one of Hong Kong's billionaire tycoons, supporting the protests, with young people leading the way.

"This movement is going to be persisting, because it's a movement of martyrdom," Lai said.

Hong Kong was a British colony for more than 150 years, ceded to the U.K. from China in the 1800s. It grew from fishing village to modern economic miracle: rich, respected, and full of Western institutions.

Claudia Mo works in one of them, elected as a pro-democracy legislator. "Hong Kong people have managed to learn about universal values, human rights, democracy, rule of law," Mo said. "The writing has been on the wall, and the Hong Kong people didn't realize, didn't know or didn't pay enough attention to it."

The roots of this struggle date back to 1997, when the U.K. handed Hong Kong back to China. The U.K. and China agreed Hong Kong would be semi-autonomous, in charge of its internal affairs until 2047. That's when the city is set to revert to full Chinese rule.

But for now, Beijing has the power to appoint who runs for Hong Kong's chief executive, its top leader. "The power is not with the people in Hong Kong; the power lies in Beijing," Mo said. "That's the 'Big Brother,' the big boss."

Inocencio asked activist Bonnie Leung, "What was the government doing that inspired you to start getting active?"

"At first of course it was the extradition bill," Leung replied.

That bill, backed by Hong Kong's chief executive Carrie Lam, would have given Beijing the power to extradite people locals and foreigners in Hong Kong to China's legal system, described by critics as corrupt.

The protests began in June – at first peacefully, with a million-person march organized by Leung and the Civil Human Rights Front. "We all know that legally Hong Kong will be part of China, but what we really want to do is preserve our system that we had enjoyed all our lives," said Leung.

The weeks stretched to months. Violence on both sides ratcheted up, spreading to the legislature, the airport, and the subways.

Mo said, "This is essentially a large bunch of young people in Hong Kong fighting for democracy."

The demonstrators added to their grievances, demanding the resignation of Carrie Lam, amnesty for arrested protesters, and an independent probe into police brutality.

Leung said, "They literally beat up not only protesters but normal Hong Kong people, innocent people, every single day."

Not everyone champions the protests. Regina Ip is a pro-Beijing lawmaker, and supported the extradition law. She also supports the police.

"Our economy is bleeding," Ip said. "A lot of people will lose their jobs. … Currently the priority, you know, must be to help the government bring back order, because Hong Kong is suffering tremendous reputational damage."

This past week, Carrie Lam finally blinked. In a public address she said the government would formally withdraw the extradition bill.

But critics say it's too little, too late. Gavin told Inocencio that he, like many other protesters, will continue marching: "Yes, I'm still going to fight for freedom."

He's even written a will. He keeps it a secret from his family, in his backpack, with instructions if he's killed.
Inocencio asked, "If you die, is it worth it?"

"It's worth it because I'm doing the right thing," Gavin replied.

Claudia Mo, a mother of two, was asked how she feels about such precautions. "They think they have nothing to lose, and they've been carrying letters to their parents or brothers and sisters in their rucksack saying that … " She became emotional, and declined to speak further. "No, I can't do this."

There are fears this could come to a bloody climax: just across the border, Chinese paramilitary forces have moved people and equipment into place, and state media has broadcast troops staging drills in which they suppress "riots."
Supporters of Beijing say it's just saber-rattling.

Regina Ip believes the show of force is meant as a deterrent: "A shot across the bow."

But Hong Kong remembers history in a way mainland China was never allowed.

This weekend, protesters again took to the streets, standing up for what they believe, they say, no matter the cost. 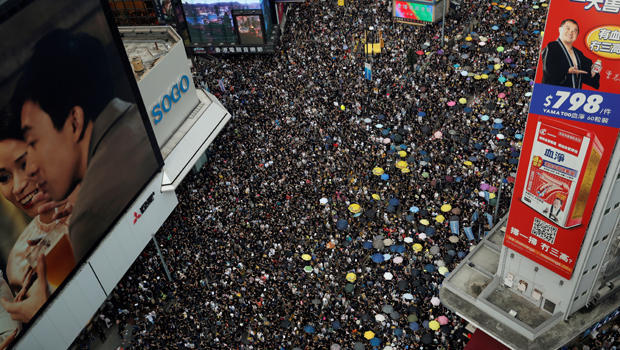 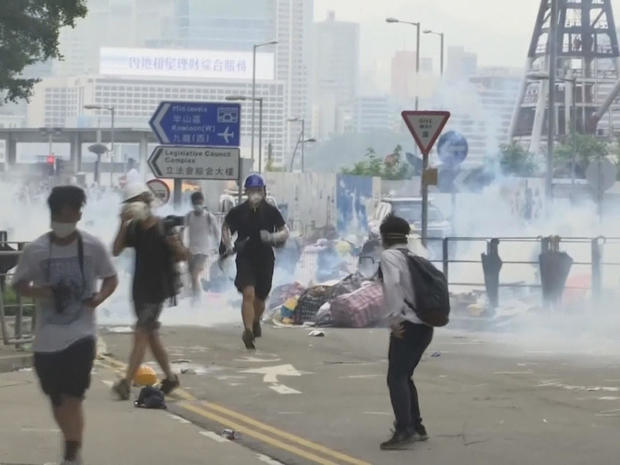