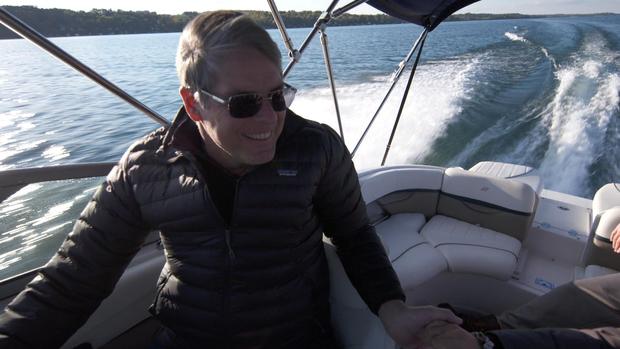 Tim Green: Coping with the ALS he thinks was caused by the game he loves

The former Syracuse standout and Atlanta Falcon never shied away from acknowledging the dangers of football. Now, over 20 years after "60 Minutes" first met him, Green is suffering from a fatal ailment he may have seen coming

In football circles, Tim Green has always been known as a Renaissance man. He was an All-American defensive lineman at Syracuse University and an English major who graduated magna cum laude. He spent eight years sacking quarterbacks for the Atlanta Falcons and picked up a law degree in his spare time. And during a decade in the broadcast booth for Fox Sports, he started writing books. Six became bestsellers. Then, last September, the man who seemed to be able to do anything sent us news he could no longer hide. He is suffering from ALS, Lou Gehrig's disease, one of a growing number of NFL players to receive that diagnosis. His body is starting to fail and his voice has lost its timbre, but his story is even more compelling now than it waswhen we first met him back in 1996, upon the publication of his football memoir "The Dark Side of the Game."

Tim Green in 1996: You cannot go through an NFL season without doing serious damage to your body…

Twenty-two years later, Tim Green spent last fall, as he has most falls. On the football field, coaching the young Skaneateles Lakers. He wasn't able to march up and down the sidelines or yell out instructions the way he used to. But he was still out there, encouraging his players, most of whom had little idea what their coach is facing.

Steve Kroft: When did you first realize that there was something wrong?

Tim Green: It was a small thing. I couldn't use my nail-clipper.

Tim Green: Yeah. I couldn't do that. And then it got hard to open things.

Green didn't make much of it then. Just a few more battle scars from his days in the NFL. The first time we met him, he told us he had a lot of them.

Tim Green in 1996: I have enough aches and pains to know that I played the game…

He was three years removed from a playing career in which he roamed the field like a predator, first in college at Syracuse…

And then as number 99 with the NFL's Atlanta Falcons. He was a vicious tackler and a voracious reader, a man who devoured "War and Peace" in the locker room before going into battle. In retirement he kept his body fit and his mind sharp by writing novels for young and old at the upstate New York home that he shared with his wife and children.

"Life can never be long enough."

But by the summer of 2016, at age 52, he finally admitted to his son Troy that he felt something was off.

Troy Green: He was saying to me you know, 'My hands, you know, it's getting hard for me to hold the weights,' And I'd make a joke, 'Oh, you're getting old,'

That same day he went straight to Mount Sinai Hospital in New York City to meet with a neurologist.

Tim Green: And, you know…

Steve Kroft: What'd he tell you?

Tim Green: Get your affairs in order.

Troy Green: He basically said, that the end is near, you better get affairs in order.

Steve Kroft: Not what you wanted to hear?

ALS, the three letters he didn't want to hear, stands for amyotrophic lateral sclerosis, a rare disease that New York Yankee legend Lou Gehrig gave a name and a face to 80 years ago and that recently claimed the life of physicist Dr. Stephen Hawking. It destroys the nerves that move muscles, eventually making it impossible to walk, speak or breathe. Tim understood that he'd been given a death sentence. He also had no interest in doctors, treatments or sympathy.

Troy Green: It was almost taboo. Even, even around the house, no one, we wouldn't talk about it, we wouldn't address it. It was just kinda like the elephant in the room.

Steve Kroft: Were you in denial?

Steve Kroft: You didn't wanna waste any time thinking about it? You just wanted to live?

Most ALS patients are given two to five years to live. And Tim Green wanted to enjoy whatever time he had left with his five kids and wife of 29 years in the beautiful town of Skaneateles, which sits at the top of one of New York's Finger Lakes.

Few outside Tim's family knew of the diagnosis. He continued making public appearances, like this one in March 2017 on "CBS This Morning" alongside Derek Jeter. They were promoting their collaboration on a baseball book for middle school kids.

Steve Kroft: Difficult to tell that there was anything wrong with you.

Tim Green: I could still enunciate my words more clearly. But that was a year and a half ago.

Tim's condition began deteriorating in the months after that appearance. His family finally convinced him to see a neurologist in Boston. He was examined by Dr. Merit Cudkowicz, the director of the Healey Center for ALS at Massachusetts General Hospital.

Dr. Merit Cudkowicz: He has one of the better prognoses because he has a slower form. However, everybody with ALS has a serious prognosis. It is, today, a fatal disease.

Steve Kroft: And there's no cure?

Dr. Merit Cudkowicz: There's no cure today But there are some treatments and there's a lot of advances in science and a lot of hope for our patients.

Dr. Cudkowicz put Green on a new treatment that can slow the progression of ALS by a third. He says he's noticed the difference.

No one knows exactly what causes ALS. In Tim Green's case, head trauma is a leading suspect. Scientists caution that the data linking football to the disease is not conclusive but the NFL concussion settlement specifically covers ALS and Tim Green believes there's a connection

Steve Kroft: How much of this do you think has to do with football?

Tim Green: I think probably a lot, if not all…

He says he lost track of the number of concussions he suffered playing football. He stopped counting after ten.

Steve Kroft: Did you ever think about it while you were playing?

He even used his head to celebrate on the field. At the time, he says, no one was concerned about possible brain damage. During his NFL career in the late 80s and early 90s, pre-season practices were particularly brutal. Tim's wife Illyssa remembers the pounding he took.

Ilyssa Green: His head was so swollen he would put, have to put Vaseline all over his head to get his helmet on.

Tim Green: Practice was much worse than the games.

Steve Kroft: And you didn't go easy in practice?

Steve Kroft: You seem like such a mild-mannered guy.

Steve Kroft: But not on a football field?

When we interviewed Tim Green in 1996, he addressed the violence and risks inherent in the game and seemed to believe that this day might come.

Steve Kroft: You said, "I think guys would be…"

Tim Green in 1996: …willing to take ten to 20 years off the end of their lives in order to get out there on a Sunday and play. I don't think that the consideration of your physical well being in the future is in the forefront of any…

Tim Green: Right. I stand by that. I've maybe taken that much off the end of my life. Maybe more. I don't know.

Steve Kroft: You don't have any regrets…

To fully understand, he says you have to know what it was like being out there, doing something you dreamed of and experiencing even for a moment the intensity of 60,000 people screaming for you and your teammates and feeling that energy through every pore in your body.

Tim Green: It was as magical and wonderful as I dreamed it would be.

Tim Green believes if his football career had started 30 years later, he might not be fighting for his life today. New NFL rules have drastically cut back helmet to helmet contact in practice and it's penalized in games.

He follows those guidelines with the youth team he coaches, limiting contact during practices. His 12-year-old son Ty is the team's star quarterback. Tim doesn't want him to play defense.

The trophies from his NFL career fill his office, but instead of mounted heads of lions, tigers and bears there are pictures of the big game quarterbacks he's brought down

Tim Green: He was the king back then.

Steve Kroft: And that is Dan Marino?

Steve Kroft: I like that (both hands in air)

Tim Green: No. Best time of my life is right now.

Tim Green: I have everything.

Tim Green was adopted so 'everything' to him means family. The Greens all live in the same neighborhood and they eat dinner together five nights a week.

He works out with his sons almost every day at his home gym to keep his muscles functioning.

The kids say their dad's not going to quit.

Troy Green: He'll never give up.

Tessa Green: I don't think I've ever seen that in his…

Tessa Green: …things that he does. He's never…

Troy Green: He doesn't give up in tic-tac-toe, he's not (laughter)…

Tim Green: I don't think about about what I can't do.

Steve Kroft: And you can still write?

Tim Green: Yeah. And I can write. And, you know, that opens up a universe.

Writing offers him an escape from his illness. He's authored 38 books overall, four since his diagnosis. He wrote the last one on his smartphone using his thumbs, all 300 pages.

Steve Kroft: So this is a new book?

His thumbs no longer work that well but his mind is just fine, he's using technology to forge ahead with book number 39.

There's a sensor in his glasses that he can move to lock on letters on his keyboard, he then clicks on a mouse and words are formed, letter by letter.

Steve Kroft: How far along are you on this, this book?

He's a little behind schedule, the first deadline he's ever missed.

Tim Green: I apologized to my editor.

Tim Green: She did. Yeah.

More scientists than ever are trying to unlock the mystery of ALS and its causes, but it's still an underfunded disease.

That's why Tim and his family are starting a social media campaign called Tackle ALS to raise money for research. Current and former NFL stars Matt Ryan, Von Miller and Brett Favre have all joined the team.

But Tim understands that he may not be around to see the benefits. In the time he has left, however long that may be, he is content to enjoy the power of his boat and the company of his family. He just feels blessed for who he was and what he has.

An update: Tim Green is still hanging in there. And he's almost finished with book number 39. 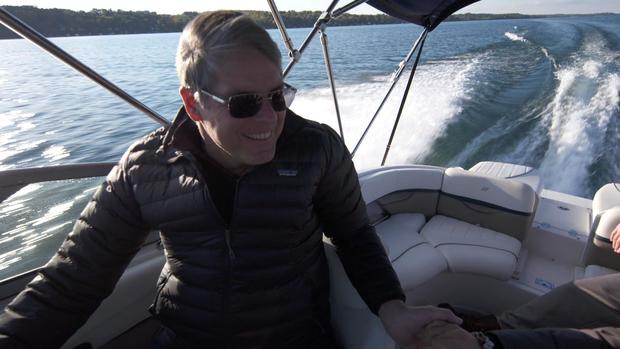 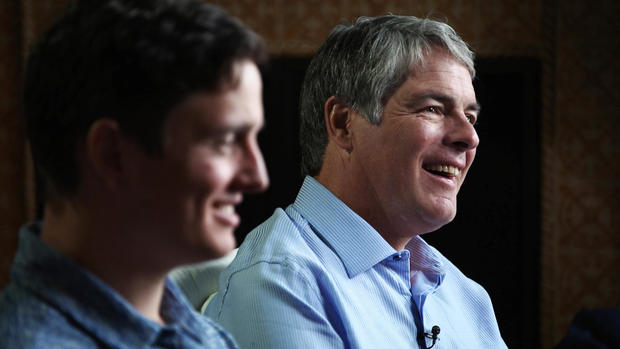 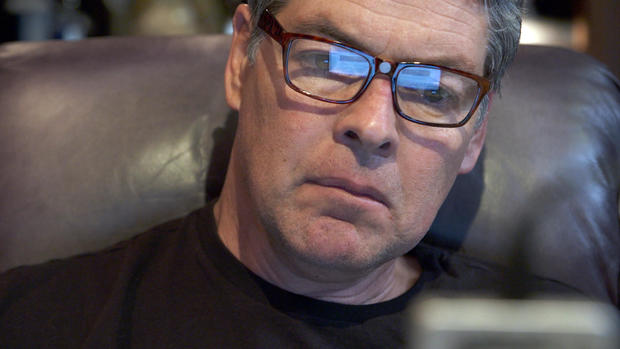 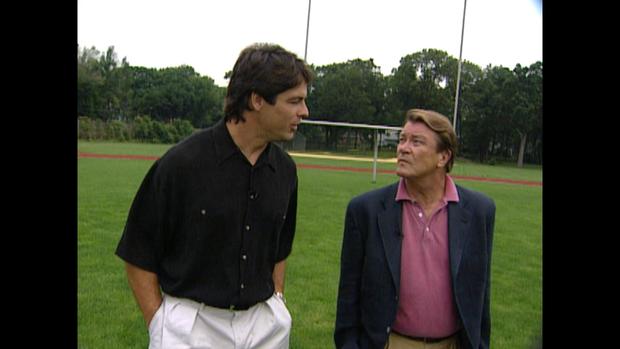 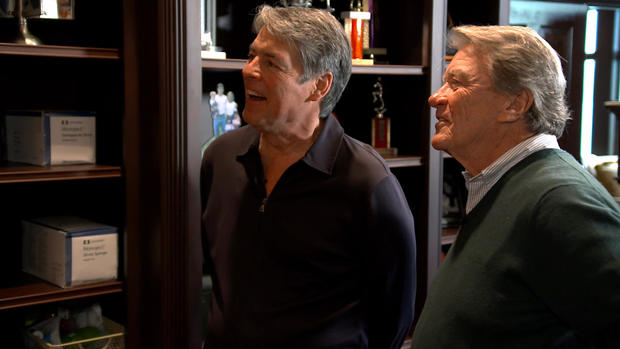 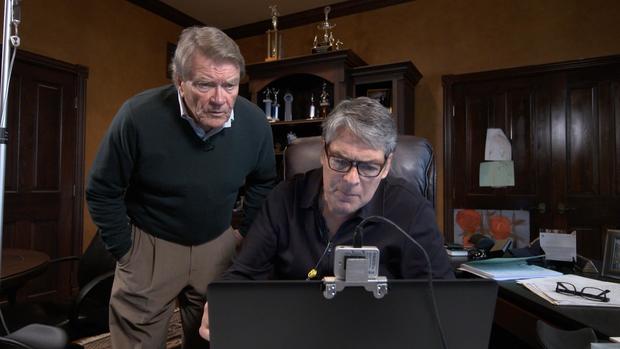 How a former CIA officer was caught betraying his country