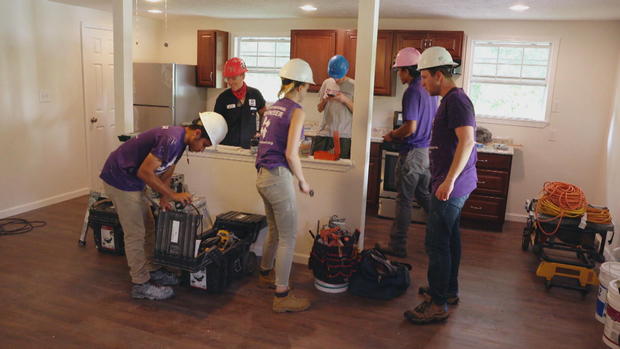 It has been two years since Hurricane Harvey made landfall in Texas. Along with Hurricane Katrina, Harvey stands as the costliest storm on record, with damage estimated at $125 billion.

When Harvey struck on August 25, 2017, Houston had never seen anything like it. Bringing 60 inches of rain in five days, Harvey damaged or destroyed 300,000 buildings and homes. And two years later, long after most disaster response aid ended, the recovery is far from over.

For Ollie Goss, who's lived in Houston for her entire life, the past two years were "hell."

"This house has been here since the '30s and it's never flooded until now," Goss said. "It literally knocked me off my feet. It was that swift."

Goss and her husband Leonard escaped, but were unable to rebuild their ruined home alone. Instead, their home was saved by a group called All Hands & Hearts.

Cook's mostly volunteer team lives together for weeks or months, eating in a community room and sleeping in small bunks. During the day, they fix homes by putting up new drywall, replacing appliances and installing fixtures.

For Cook, the work is personal. Her Mississippi home was one of hundreds of thousands destroyed by Hurricane Katrina in 2005. After the hurricane subsided, her family lived in a trailer for months, and her 9-year-old sister was hospitalized for pneumonia caused by black mold.

"I know what it was like before I had the purpose," she said. "When you know that there's something out there and you're looking for it, and then you find it, it hits the spot."

All Hands & Hearts believe their teams are filling a space that's sorely lacking. FEMA gives money to homeowners after a natural disaster, but it's often misspent, and it's rarely enough to cover the full cost of rebuilding. All Hands & Hearts said it puts donated dollars directly into labor and materials, cutting out middlemen.

The group is also rebuilding the home of 80-year-old Ella Hill, who lives alone in Houston.

"I'm blessed. Every day I open my eyes, I expect a miracle and I get it," Hill said. He spoke highly of All Hands & Hearts, calling the group "fantastic."

The work on Hill's home remains ongoing – but the Goss' home is now complete. "Not only did that beautiful refrigerator come, they brought a range," Goss said. "I couldn't believe it. I started crying. I felt like an idiot. But have you seen them? That's just what I would have picked out!"

The coordinator on the project, one of Cook's team leaders, worked with the Goss' throughout the project.

"We completed the house and [Lenard] said that we officially made him happy again," she said through tears. 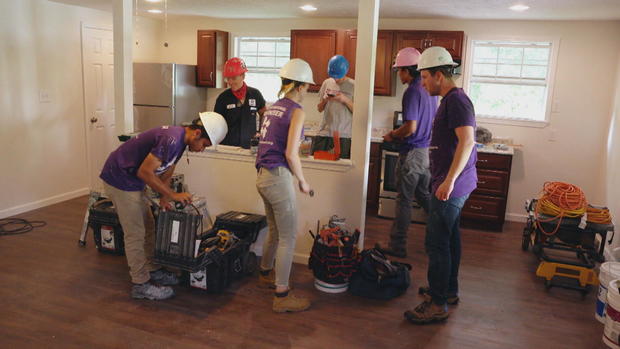 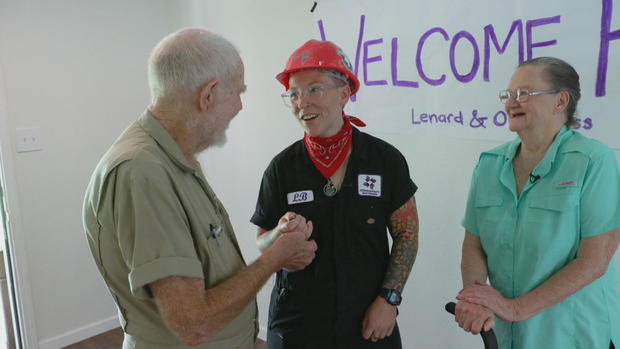