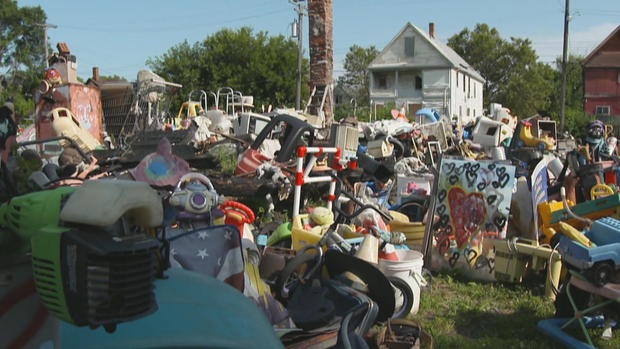 CBS News August 21, 2019, 1:00 PM How a Detroit artist used what was left behind to transform his dying neighborhood

In our summer series "American Wonders," "CBS This Morning" is exploring places that make America wonderful. This week, CBS News national correspondent Adriana Diaz visits a neighborhood in Detroit that refuses to be forgotten. Most residents moved away after economic hardship and urban decay. But one man saw beauty in what was left behind — and now, his artwork attracts hundreds of thousands of visitors every year.

Scattered in empty lots among the few remaining homes on this two-block stretch of Heidelberg Street are seemingly random objects — a pile of suitcases, an old classroom chair, a baseball mitt — that might make more sense inside those homes. But making sense seems to be the last thing on the mind of artist Tyree Guyton.

Guyton grew up on Heidelberg Street with three generations of his family, through the rise, fall and now-renaissance of the city around it: Detroit.

"My grandfather, he was my best friend," Guyton said. "I was 9 years of age when he gave me a paintbrush and told me to paint and said that the world was my canvas."
Guyton's world imploded in 1967, when racial tensions and post-war urban decline sparked five days of deadly riots in his family's own backyard.
"Oh, I thought the world was comin' to an end," said Guyton, who was 12 at the time.

After the riots, the neighborhood emptied out — and left behind the objects that once filled residents' lives.

"I decided to gather those things up and to create this magic," he said. He added that he wanted to show that the objects, discarded years ago, still have value.

Guyton's so-called Heidelberg Project now attracts an estimated 200,000 visitors a year from all over the world, adding more than $3 million annually to the local economy.
"I just like the oddity of it all," one visitor said. "It's bringing the neighborhood back to the neighborhood," said another. "It's really interesting."
The project also brought controversy to the neighborhood. Some residents complained about traffic and code violations, and the city even bulldozed parts of it twice.
But Guyton said the controversy hasn't slowed him down. "I don't mind getting in trouble first and apologizing later, if necessary," he said.
The Heidelberg Project is now working with the city to address those concerns, a task that falls to the project's president, Jenenne Whitfield.
"It's like any other family, you got sisters and brothers that don't get along," Whitfield said. "But we never stop trying!"
A former banker, Whitfield made a wrong turn down Heidelberg Street 26 years ago and met Guyton sitting on a curb. Today, she's also his wife.

"Do you feel that your work has followed the rise and fall and rise of Detroit?" asked CBS News national correspondent Adriana Diaz.

"I definitely do, I think it is the greatest symbol," Whitfield said. "And as the city of Detroit is kind of having this new life, so to speak, so is the Heidelberg Project."

That new life means dismantling some of the installations and moving them to galleries around the world. The Heidelberg Project has a proposal at City Hall to turn this once blighted neighborhood into a vibrant artists' village, with live-work studios, an arts academy and businesses that cater to them. They've even trademarked their own school of art, called Heidelbergology.

Whitfield defined "Heidelbergology" as "the study of found materials incorporated into the fabric and structure of an urban community and the effects on that community."

"You've put Heidelberg, this neighborhood, on the map, and now you want to take it to the next level?" Diaz asked.

"That's why I can walk away," Guyton responded. "I've done it."
As the neighborhood's profile has risen, so has Guyton's. He's now represented by an art gallery in New York, and other cities have asked him to create works of art to revitalize their neighborhoods. 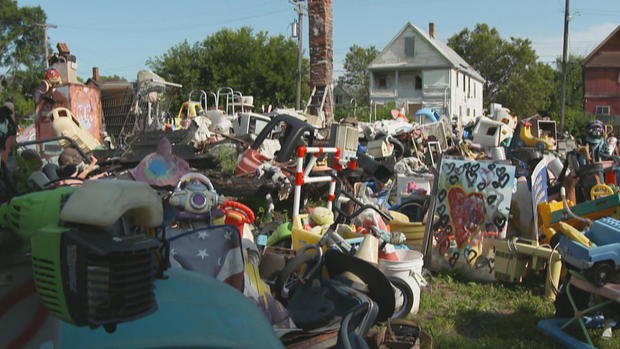 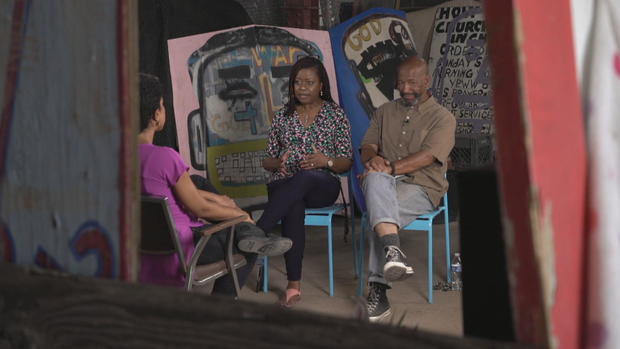