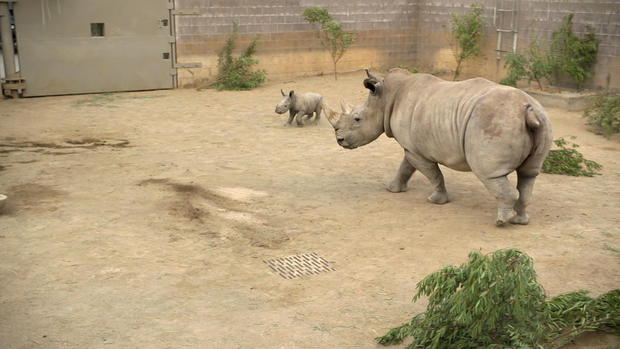 The northern white rhino is on the verge of vanishing forever. The remaining two members of the species are a mother and daughter that live under 24-hour armed guard in Kenya to protect against poachers.

Thousands of miles away from the northern whites are Edward and his mother Victoria, southern white rhinos that live at the San Diego Zoo. Edward took his first steps about two weeks ago, and made history as the first southern white born in North America using artificial insemination and frozen sperm.

Edward's birth confirms the zoo's theory that Victoria could eventually serve as a surrogate mother for a northern white rhino embryo. "It's a big step in the overall plan, which is to help the northern white rhino come back from the brink of extinction," Durrant said.

The next step is to transform rhino skin cells into stem cells. "A stem cell is a cell that has the potential to become any other cell in the body," Durrant explained. "And the eventual goal is to redirect them all the way to sperm and eggs."

So far, they've succeeded in turning stem cells into beating cardiac muscle that makes up part of a heart — the result of what Durrant describes as "very very complex" technology.

The work continues in the park's "Frozen Zoo." It's the world's largest genetic bank, and it contains samples from about 10,000 animals. And while Durrant said implanting a northern white rhino embryo in Victoria is likely years away, the mission is personal for her team.
"We feel a responsibility as a member of the species that caused their extinction," she said.
Edward is expected to make his public debut in the weeks to come. In the meantime, Victoria is showing off her motherly instincts.

"She's a helicopter mom," said lead rhino keeper Jonnie Caprio. "She could definitely take a rest while he's running around, but she is just right on top of him wanting to make sure he's OK." 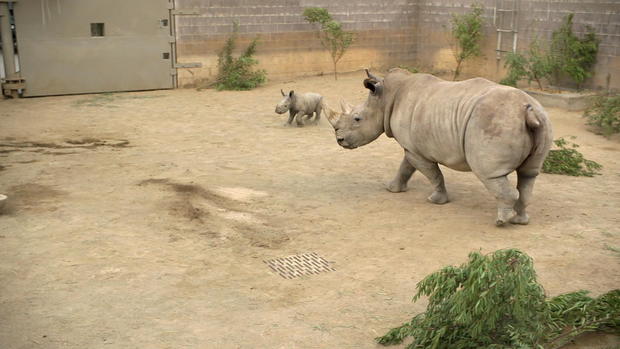