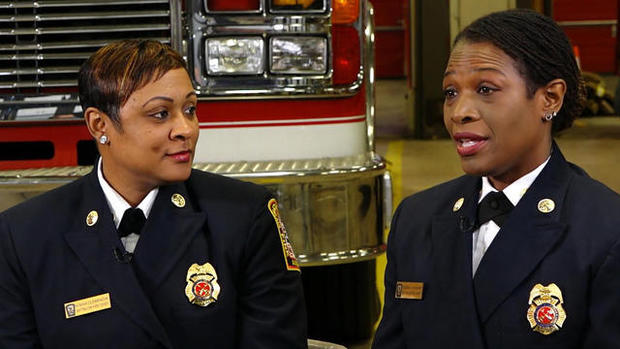 Our Profiles in Service series highlights Americans who dedicate their lives to helping others. In this installment, we focus on the only two female battalion chiefs in the Washington, D.C., Fire Department.

When Kishia Clemencia and Queen Anunay joined the Washington, D.C., fire department, there were more than 1,500 firefighters, but just 35 of them were women. Now over two decades later, the two women have climbed the ranks and are helping to change the look of the city's finest public servants.

Every year, firefighters in the nation's capital protect some 700,000 residents and more than 20 million visitors from around the world.

Battalion chiefs Queen Anunay and Kishia Clemencia say the job is tough on anyone.

"You have to have the spirit of giving," Anunay said. "You can't have never run, never competed in sports. … This is what you would call a professional athlete."

"Absolutely," Clemencia replied, adding, "You're going to see things that's going to be devastating to you, that's going to last in your memory forever. It's how you deal with that."

"Everyone doesn't fly airplanes. Not everybody is going to run into a burning building," Anunay said.

For women firefighters, there are some extra challenges.

The chiefs learned that lesson soon after joining the department in the early '90s.

"Once you get out of training academy and you realize when you go out into the companies, they all know your name. The members know when you're getting a female assigned," Anunay said. "So at that point I knew the seriousness and that we were minorities. True minorities."

"Did some people, did you get the sense think you shouldn't be there?" Crawford asked.

Less than 4% of firefighters nationwide are women, according to Women in Fire and United States Fire Administration, and the largely all male environment has at times fostered discrimination: more than half of the women surveyed nationwide report feeling shunned or isolated and 43% said they experienced verbal harassment.

"I had some rough time where I was accused of just sleeping around with all the firefighters. In one house," Clemencia said. "It infuriated me so much that it motivated me to do more… and for me, my revenge was success."

"I think if I'm here and I'm not representing myself as a professional and changing the climate for women officers, then I haven't done my job. I'm here to make things better," Anunay said.

"Seeing her in position even in 1991 where there weren't many women, it was inspiring. And when I talk with her, I said, 'I'm gonna be in charge one day.' She said, 'Well, you better know your stuff,'" Anunay said. Annunay now oversees 50 firefighters at six firehouses and is passing on that same encouragement to the next generation.

"She's a really tough chief. She cuts me no slack," Jasmine Jones said. She graduated from the academy in January and still hears some say the firehouse is no place for a woman.

"They think I can't do it so I just have to prove them wrong, give them a reason to be like, we need more women like you to want to do this. I think we do the job better than the guys anyway," Jones said with a smile.

Clemencia said she "absolutely" still hears naysayers. "That would never go away," she said.

"That we didn't earn it. That we don't deserve it. Oh, they're giving us this position because of the climate of women empowerment," Clemencia said. "So I'm like, well, if that's your opinion, that's your opinion. I know what I've done to get to this point."

"I hear it. I love it. I embrace it. Because like you say, you know it takes a bad female to be in a fire department," Anunay said.

As they get close to retirement, these chiefs have personal goals. Anunay is hoping to change the department's culture so that more women can sign up and excel. And Clemencia is also setting her sights high and hoping to advance up the ranks in the department and break even more glass ceilings for women.

Watch more from Profiles in Service: 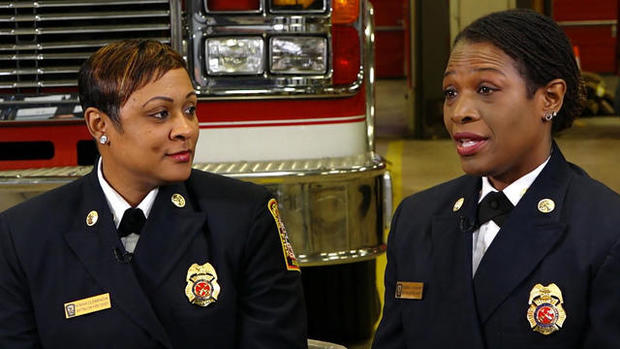