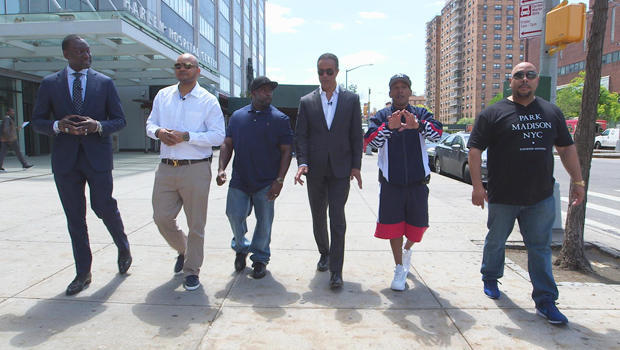 Santana said there is never a time when he doesn't think about the episode that brought them together: "It's every day. Constantly." Salaam said that every day it's "probably my second or third thought."

"Probably, like, my fourth thought," said McCray. "Even our conversations is different. It's not normal. Our conversations would be about prison, how we had to survive in prison."

They are known as the Central Park Five, a name they came to share 30 years ago, after a young white woman named Trisha Meili went for a jog in New York's Central Park.

The 28-year-old woman was found by two passers-by, viciously battered and unconscious. She had been dragged into the bushes near an area called the Loch, beaten, and sexually assaulted. In a city traumatized by crime, the attack was an outrage, and became a media sensation.

Investigators quickly focused on a group of black and Hispanic boys who were in the park that night. Media reports described them as a "wolf pack," who had committed muggings. Police arrested five teenagers, charging them with attempted murder, rape and assault.

Salaam, McCray, Richardson, Wise and Santana were tried, convicted and imprisoned for the crime they maintained they did not do.

The story of how the boys were charged and, years later, cleared of that notorious crime is the subject of a new Netflix miniseries by the Oscar-nominated writer-director Ava DuVernay, called "When They See Us." "My goal was to humanize boys, and now men, who are widely regarded as criminals," said DuVernay. "And in doing that, to invite the audience to re-interrogate everyone that they define as a criminal."

DuVernay contends that what is seen all too often in criminal cases is race. "I'm asking the question to everyone, 'What do you see when you see black boys?' And that's a painful answer, because I know what the answer is for many people. It's exactly what these boys were called: wolf pack, animals, criminals, so much so that they could be tossed aside on a case that was made from a complete lie."

In the series, as in life, only two of the five teenagers even knew each other, but during interrogation, they say police coerced them to create stories implicating one another.

To watch a trailer for "When They See Us," click on the video player below:

The men who lived through it say the reality was even worse.

Salaam said, "Soon as we get in, they separate us and they start working on us. And I'm hearing Korey being physically beaten in the next room. And I'm immediately beyond afraid."

Richardson said, "At the time, my mom, she suffered from a stroke, she had diabetes and she left. And that was their time to get on me."

"We're 14-, 15- and 16-year-old kids," said Santana. "Never been in trouble with the law. Never had no police contact. These are seasoned veterans. This fight was fixed."

McCray said he was interrogated for more than 10 hours: "I just kept telling the truth at first. They asked to speak to my father. My father left the room with them. Came back in the room, he just changed. Cursing, yelling at me. And he said, 'Tell these people what they wanna hear so you go home.' I'm like, 'Dad, but I didn't do anything.' The police is yelling at me. My father yelling at me. And I just like, 'All right. I did it.' And I looked up to my father. He is my hero. But he gave up on me. You know, I was telling the truth and he just told me to lie."

DuBois asked, "Did you ever make peace with your father?"

None of the five ever admitted to committing the rape, but they did confess to being there. They blamed each other – damning admissions, even in the absence of physical evidence.

As "CBS Evening News" reported at the time, there was no blood on their clothing; there was no match for semen; the DNA tests came back negative. Nothing linked the boys to the crime.

At trial, all were found guilty. Four of the five served about seven-year sentences as juveniles, refusing early parole because it required admitting guilt. But the oldest of the group, Korey Wise, served time as an adult.

In his 13th year in prison, Wise had a chance encounter with another inmate that would change the lives of all the men convicted of the rape of Trisha Meili.

"The resolution of this whole tragedy came from something that I don't believe was happenstance," said DuVarney. "It's a coincidence that borders on miracle."

Matias Reyes spotted Wise in a prison yard, and the two began talking. "'Wow, you still here after all these years,'" Wise recalled being told. "'I guess so.'"

The two had met years before, and Reyes began to feel guilty that Wise was still in prison for a crime he himself had committed. Said Salaam, "He saw Korey and was like, 'He's still here? I gotta tell the truth.'"

Reyes confessed that he alone had committed the rape, offering details about the crime that only the assailant would know. His DNA was a match, and the Central Park Five were exonerated.

The City of New York eventually agreed to a $41 million settlement – about a million dollars for each year of imprisonment.

DuBois asked, "Did the money make it better?"

"We were able to relocate, put our children in better situations," said Santana. "But besides that, no."

Salaam added, "No amount of money could have given us our time back."

With the release of "When They See Us," the men who were the Central Park Five embrace the attention and dialogue they hope their case will bring, to crime, punishment and race.

DuBois asked, "Is there a life lesson for what you've been through?"

"Truth," McCray replied. "I preach to my kids, 'Just tell the truth. Be true to who you are.' Honestly, the last time I lied, got me seven-and-a-half years for something I didn't do." 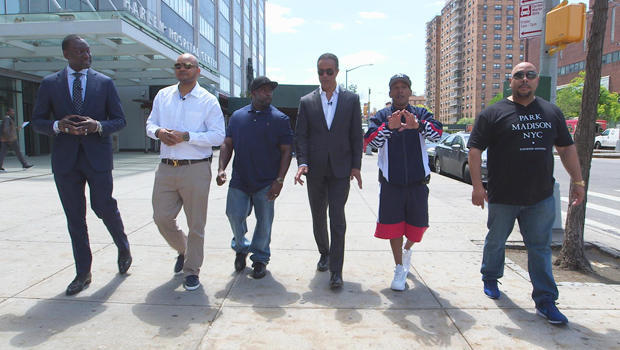 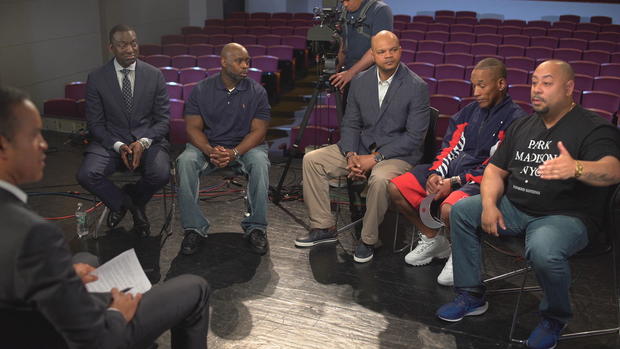