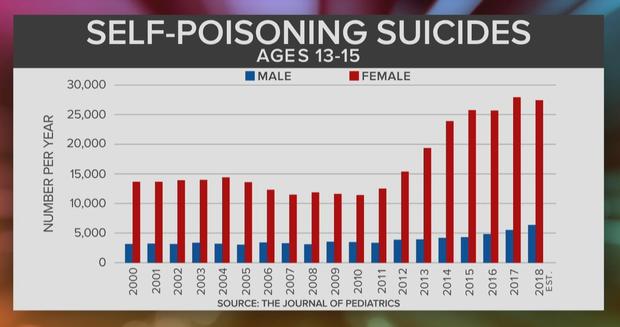 The number of suicides by self-poisoning between 2000 and 2018 has soared especially among teenage girls, according to a new study published in the Journal of Pediatrics. The study examined those between the ages of 10 to 24 years old and showed suicide is the second leading cause of death in that age group.

Teenage girls are more likely to attempt suicide, according to psychologist and CBS News contributor Lisa Damour, while boys and men are more likely to complete suicide. But she cautioned: "We don't actually know what accounts for the spike [among teenage girls]. It's very hard for us to make sort of clear, causal assumptions here," Damour said Wednesday on "CBS This Morning."

The American Psychiatric Association says one out of every six people will suffer from depression at some point in their lives. Damour likened mental health to physical health.

"Mentally healthy people get sick. They get down, they feel sad, and they recover in the same way physically healthy people get sick and recover," Damour said. "What we worry about is when people become upset, and they stay down and they cannot pull themselves out of it in the same way we would know if someone was really in trouble physically if they became ill and got iller and iller."

CBS News medical contributor Dr. David Agus said "one of the greatest problems" in diagnosing and measuring mental health is that it's based on four words: "How do you feel?"

"There's a spectrum of each of these disorders, and when you measure things, you have an optimization parameter," he added.

"The problem with clinical depression is you can't shake that off any more than you can shake off a broken leg," Damour said, adding there's more work to be done in making people understand that "depression is an illness in the same way that pneumonia is an illness."

Agus said treating depressing is not as simple as "a chemical imbalance in the brain."

"Certainly neurochemicals, these molecules in the brain, do control how we feel, our emotions, and how we respond to things. The drugs we have, they work. They change some of these chemicals. But it's not that simple," Agus said. "Most of these drugs take weeks to a month to work. So it's not just giving a chemical. It may be creating new neuronal connections. We don't understand necessarily how all of these work, but they work. Psychotherapy, medications work."

But Agus also listed other factors for depression, including: "People with medical problems, whether it be low thyroid or heart disease, higher depression. When you don't sleep, depression goes up." With seasonal affective disorder, depression also goes up.

"So address the things that are addressable, discuss it with your doctor, and talk about potential treatments if it's appropriate," Agus said.

If you are having suicidal thoughts, you can also call the National Suicide Prevention Lifeline: 1−800−273−TALK (8255). 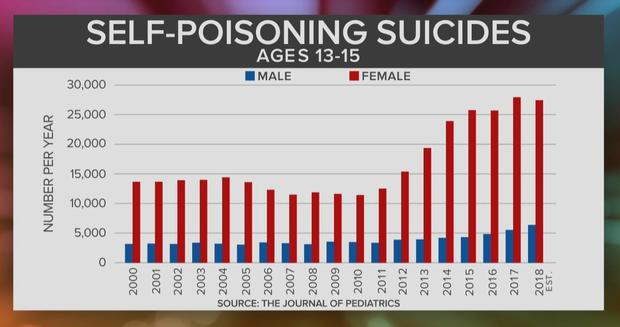 Firefighter battling the El Dorado Fire in California has died

One-time Hurricane Sally not through with Florida or Alabama yet