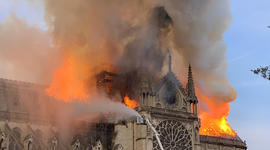 Paris — One of the world's most historic landmarks went up in flames Monday. A devastating fire swept through Notre Dame, a cathedral visited by 13 million people a year. A marker outside Notre Dame shows it is at the exact geographic center of Paris, and it's also the center of the city's soul.

Notre Dame, or our Lady, is considered the most famous Gothic cathedral ever built. Construction began on the historic monument in 1163 during the reign of King Louis VII and took nearly 200 years to complete.

Its picturesque stained-glass rose windows were made of hundreds of panes, depicting various biblical images like apostles and angels. Gargoyles and statues surround the cathedral.

The cathedral's spire was currently undergoing renovations, but the monument's last major makeover was more than 150 years ago, partly inspired by Victor Hugo's depiction of its decaying state in his novel, "The Hunchback of Notre Dame." The book inspired famous film versions in 1939 and in 1996.

Notre Dame is also home to the crown of thorns, considered Paris' crown jewels. It's believed to be the crown worn by Jesus Christ before the crucifixion.

The cathedral's bells have tolled for significant occasions for centuries and have marked moments of tragedy, including the Paris terror attack in 2015.

Officials say they have been able to save the cathedrals two iconic towers. The fire happened around closing time, when most of Notre Dame's 30,000 daily visitors were already gone, so it could have been much worse. 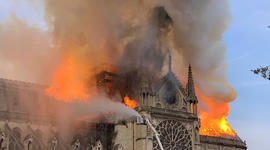 Hungry with children: 1 in 3 families with kids don't have...