The coyotes' story, in the video player above, is part of the new CBSN Originals documentary, "Border Business: Inside Immigration." The full hour-long special premieres on CBSN Sunday, March 31, at 8 p.m., 11 p.m., and 2 a.m. EDT.

Along the Panama-Colombia border lies 60 miles of dense forest where smugglers known as coyotes guide migrants seeking passage north, for the right price.

Emerson Gonzalez Jimenez said he typically charges $700 to get people safely from Capurgana, Colombia, to Bajo Chiquito, Panama. He said he sometimes makes exceptions and lowers the cost, especially if he encounters migrants who were abandoned by their group. "Many get lost. They lose the path," said Gonzalez Jimenez.

"I helped a lot of people, particularly women with children," he said. "Because many have passed through here and not made it."

Through the Darien Gap, also known as the Tapón del Darién, there are no roads other than steep, muddy inclines or well-worn trails bisected by wide river crossings. And treacherous terrain is far from the only danger for those making the trek. There are poisonous snakes, jaguars, and severe weather. Decaying corpses of those who attempted to pass are scattered throughout the jungle, along with articles of tattered clothing and used kitchenware.

These hazards create an economic opportunity for men like Gonzalez Jimenez.

The 56-year-old farmer and miner based in Panama owes a sizable portion his livelihood to his underground trade as a guide. For over a decade he's provided this service with a trusted partner, Augustin, who asked that we not use his last name. The duo have known each other since they were children, a "friend like a brother" relationship, Augustin said.

The average take-home salary in Colombia is about $26,000 a year after taxes. Augustin says the supplemental income he makes smuggling migrants through the Darien Gap enables him to afford his house and raise his kids in a happy, healthy home. But they don't only do it for the money.

"Most people think we (smugglers) are bad," Gonzalez Jimenez said. "But if a person needs to go from there to here, and can't do it… and they tell me, 'I'm going to pay you five, 10, 20 dollars… to take me to whatever location.' And if I didn't have a job at the time… to me, that's good." 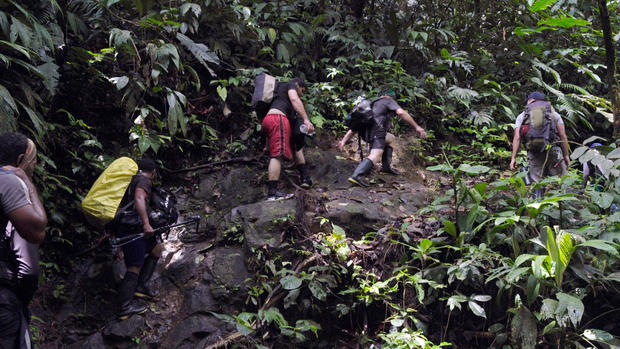 Unpaid Kentucky miners yet another sign of coal’s decline

Submarine that went missing with 44 aboard found deep in Atlantic