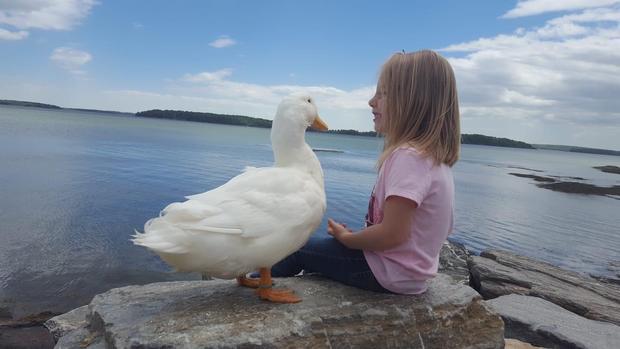 Freeport, Maine — A lot of kids go to the park to see ducks, but 8-year-old Kylie Brown of Freeport, Maine takes her duck to see the park. As CBS News first reported a few years ago, Snowflake goes into the pond and then returns when called.

Snowflake truly believes that Kylie is his mother and the duck is not alone in this delusion.

Kylie first noticed Snowflake's attachment the day the Browns brought him home. For whatever reason, the duck imprinted on Kylie and just had to be by her side, no matter what the hour. When Snowflake refused to stay in the backyard, Kylie's parents, Ashley and Mike, said they had no choice but to give him a diaper and make him a house duck.

Snowflake goes to the beach in summer and sledding in winter. He's been to soccer practice, gone on sleepovers and he even went trick or treating as Olaf, the snowman from Frozen. Over time, because they both sincerely believe they belong together, Snowflake and Kylie have formed a bond like most of us will never know.

"It's special that I know that that's the type of person she's going to be," Mike said.

Since CBS News first told this story in 2016, Kylie has gotten even more motherly. She taught Snowflake how to read, or at least not eat the words.

She also taught him the value of community service, signing him up to be a therapy duck. Of course, she knows just what to do whenever her little one needs help falling asleep.

Kylie really is going to make a great mom someday. Mostly because she always has been. 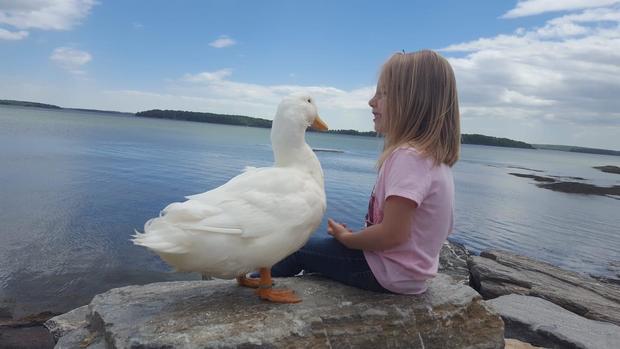 Ring to tighten privacy amid concerns about data sharing

Duchess Kate candidly discusses her struggles as a new mom

2020 Daily Trail Markers: Nevada readies for caucuses — what to...