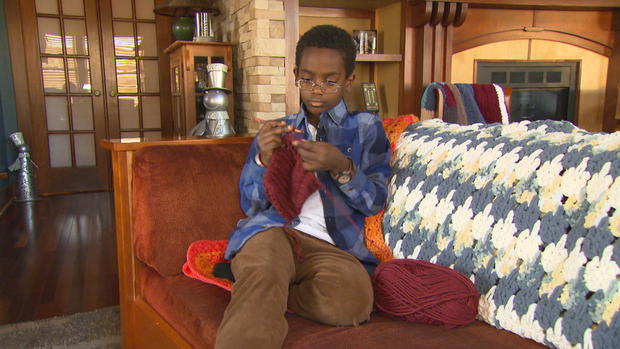 La Crosse, Wis. — In a craftsman-style house, in a normal Wisconsin town, lives an 11-year-old with a grandmother's soul.

Jonah Larson, born in Ethiopia, adopted and raised in La Crosse, is the next big thing in the crochet world. He learned to crochet when he was 5 from a YouTube tutorial his mom Jennifer found. She gave him a hook, some yarn and left him alone.

"I thought I was gonna have a big ball of yarn, a mess. He had a dishcloth made and it was pretty good too," she said.

It started as a diversion to keep his sometimes overly-active mind occupied. He got so fast and so good he started giving lessons on social media.

But his nimble fingers can be flabbergasting to one who is all thumbs. After the local paper ran a story on Jonah, his videos went viral.

Now Jonah's happy to be an ambassador, introducing his craft to a new generation, like the kids in his old fifth grade class at State Road Elementary.

It's not easy, but with encouragement, comes success. His parents work hard to keep life normal for Jonah and his siblings.

"People do forget sometimes that Jonah's a kid. We need to remind them that he's 11," his mom said.

For now though, there is nothing more fun for Jonah than this.