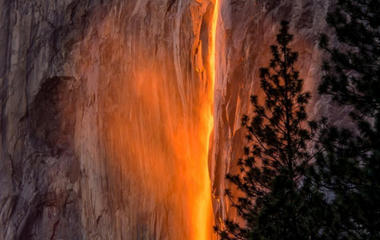 Yosemite's famous Horsetail Falls look more like a lava flow this week thanks to a rare natural phenomenon known as the "Firefall." When the sunset hits the waterfall on El Capitan at just the right moment, it creates a stunning orange glow. But it can only be seen over a couple of weeks in mid-to-late February and even then, the conditions have to be just right.

Photographer Doug Holck has been so captivated he's gone therefor the past four years to document its beauty.

"And to see a special part of this creation that only takes place in a certain, just a small window of time each year makes for excitement," Holck said.

He's one of hundreds each night who make the annual pilgrimage to Yosemite, braving the frigid weather to fill their social media feeds with the fiery sight.

"So there's this great feeling of camaraderie with people from other places and then when that moment happens the place is silent and you don't hear anything except just the clicking of those shutters, it's pretty exciting," Holck said.
For the Firefall to occur, nature needs to cooperate in three critical ways: The sun has to align with El Capitan in just the right way, the sky needs to be clear and there needs to enough snowmelt for the waterfall to flow. The icy winter has had an impact on the view.
"There's a lot of ice up there so when it's warmer you're going to see more water coming down the Horsetail Falls," said park ranger Jamie Richards.
Part of what makes this sight so special is how brief it is. The phenomenon only lasts about five to 10 minutes right as the sun sets. Still, that's long enough to make a lasting impression.
"I think one of the most exciting experiences I ever had in this particular spot is when the light finally showed the very top of the fall … and the forest erupted with people applauding and cheering and whistling you know it was a happy place to be," Holck said.

Park rangers said the sunset occurrence will likely be visible for another week, depending on the weather. If you want to see it in person, they say to be prepared for cold weather and a mile-long hike on a paved road to and from the viewing location. 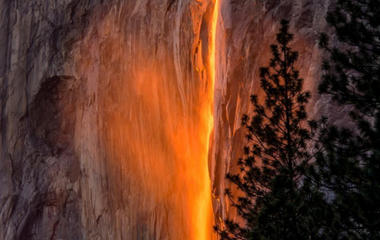