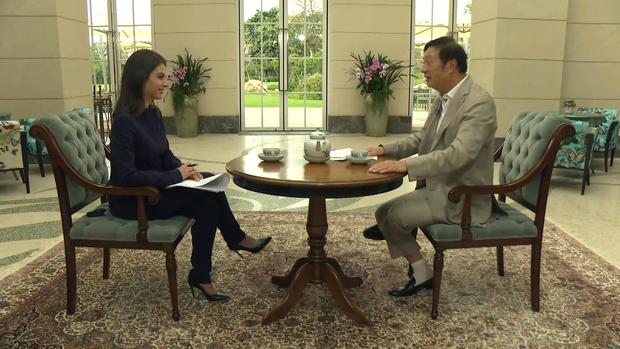 Chinese company Huawei is the largest seller of telecommunications equipment in the world. Three billion people in 170 countries use Huawei products worldwide, and the company sells more smart phones than Apple, and is only second to Samsung.

But the Trump administration is considering banning all Huawei products from being used in the U.S., claiming the company a threat to national security.

Huawei's founder and president, Ren Zhengfei, denied allegations by the U.S. government and security agencies that the company provides a backdoor to Chinese intelligence.

"Absolutely not possible. And also, we never participate in espionage and we do not allow any of our employees to do any act like that. And we absolutely never install backdoors. Even if we were required by Chinese law, we would firmly reject that," Ren told "CBS This Morning" co-host Bianna Golodryga in his first TV interview with an American journalist.

U.S. officials point to a 2017 Chinese law requiring its companies to assist in national intelligence gathering.

In January, the Department of Justice hit Huawei with 23 criminal charges, alleging bank and wire fraud, violating sanctions on Iran, and conspiracy to commit money laundering.

"She's facing extradition to the United States. These are serious charges leveled against her," Golodryga said. "Why do you call these charges politically motivated?"

"I can only answer your question after the court makes its decision," Ren said.

Asked whether he has a statement as to whether or not Huawei violated international sanctions, Ren said, "We still have to wait till the court makes the decision."

"Do you feel that you, your company and your daughter are used as a tool?" Golodryga asked.

"I think both China and the United States are of large scale. And while those powers clash, our company is as small as a tomato. We are not that — we do not carry that big weight, and neither does Miss Meng Wanzhou. And I don't think Meng Wanzhou has anything to do with the clashes between the two powers."

The two powers are in the middle of trade talks over U.S. imposed tariffs on Chinese imports. President Trump has threatened to raise them next month. The Justice Department is also accusing Huawei of corporate espionage for stealing from T-Mobile, an American company.

"You settled a lawsuit with the company, and when they accused you of stealing an arm of its robot called Tappy, the FBI found internal emails suggesting that the company rewarded stealing intellectual property. Is that the case?" Golodryga asked.

"First of all, we have a very clear position. We never reward any employee for improper actions. We actually punish them. And for these cases that you mentioned, they are already in legal proceedings, so let's wait for the court to make its final decision," Ren said.

"So just to be clear, you never authorized internal emails that rewarded employees who stole intellectual property from competitors?" Golodryga asked.

"Definitely I punish employees for improper behavior, because if you don't do that, a company of this scale, how can we survive?" Ren responded. "And our company highly respects intellectual property."

"The rap sheet on Huawei just gets longer and longer," Morell said, adding, "Huawei increasingly is making itself a platform from which Chinese intelligence can do its job around the world."

The Trump administration is reportedly considering an executive order banning Chinese telecoms in the U.S. That would include Huawei.

"What is your response when you hear the director of the CIA, Gina Haspel, say that she would never use a Huawei product because of safety and intelligence concerns?" Golodryga asked. "Former director of the CIA, Michael Hayden, said that he has seen enough evidence to persuade him that Huawei is spying for China."

"Maybe it's because they don't use our equipment," Ren said. "We focus on what we can do. It's OK to leave behind what's impossible."

CBS News reached out to the Justice Department for comment, but have not yet heard back.

Despite U.S. efforts to get allies on board with shunning Huawei, some are still open to working with the telecom giant in building 5G wireless infrastructure. Watch Thursday, Feb. 20, only on "CBS This Morning," as Ren talks about the cutting-edge technology and how Huawei became the industry leader. 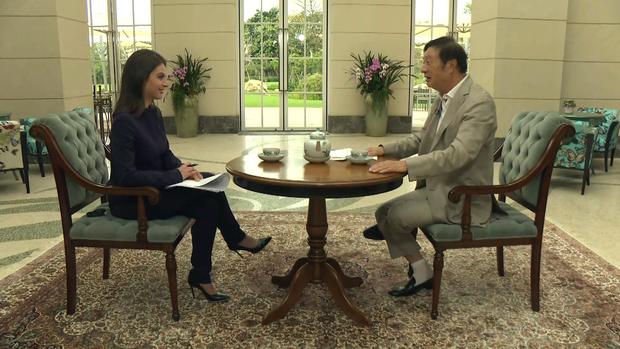