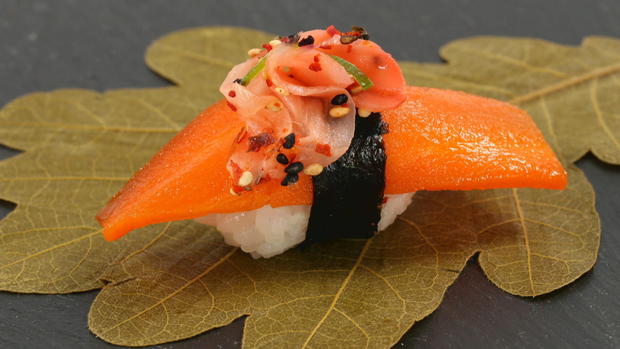 Chef Brad Farmerie of New York City restaurant Saxon and Parole says the must-order at his eatery is a dish that features something called "ahimi," a vegan tomato product that looks and tastes like raw tuna. The taste is so on-point, he said, even meat eaters order it.

"When we serve these upstairs a lot of people don't know the difference between this and tuna," Farmerie told CBS News' Michelle Miller. "Quite often when they see something where they can have tuna or the ahimi, each guest will get one of each. So that way they can taste they can try and compare."

David Benzaquen is CEO and co-founder of Ocean Hugger Foods, the company behind Ahimi. He said his plant-based alternative to tuna is cheaper, healthier, environmentally friendly and very much in demand. Overfishing has lead to a huge reduction in the world's tuna population, which is why the product is generating interest from more than just vegetarians.

"We have folks who are just looking to reduce how much animal protein they're eating for health reasons. Those who are concerned about mercury, folks who are allergic to seafood. And we're seeing just a lot of millennials who aren't even thinking about 'why.' They just think this is a really cool thing. They like to make a difference," Benzaquen said.

The United Nations estimates 85 percent of the world's commercial fish populations are fished to the max, overfished or in decline.

Although retail sales of plant-based seafood in the U.S. last year only totaled $9.3 million, Bruce Friedrich, who heads a non-profit promoting alternatives to traditional meat and dairy products, predicts sales of seafood alternatives will skyrocket like dairy-free milk.

"As plant-based seafood companies come online with more and more products and consumers try them and consumers like them, we're going to see this market become a multi-billion-dollar market in the next decade," Friedrich said.

Chef Chad Sarno is hoping to reel in some of those profits with his startup Good Catch. Its "fishless tuna" is made of legumes and seaweed. It can be used in dishes from pasta to rice bowls and sushi rolls.

"Everywhere you turn there's more statistics about what's going on with our oceans … So being able to create something that people are used to when it comes to texturally, nutritionally, flavor-wise and functionality was really important for me," Sarno said.

He said the demand is huge.

"Everything from fast casual restaurants to institutions and universities. The demand for plant-based has grown exponentially in the past 10 years," Sarno said.

Good Catch sells three varieties of its fishless tuna for just under $6 a packet at Whole Foods. Later this year, customers will also be able to buy crab-free cakes and fish-free sliders and burgers.

As for Ocean Hugger, the company hopes its raw tuna substitute will win more people over at the sushi counter. Later this year, an eggplant "eel" and carrot "salmon" will hit the market. 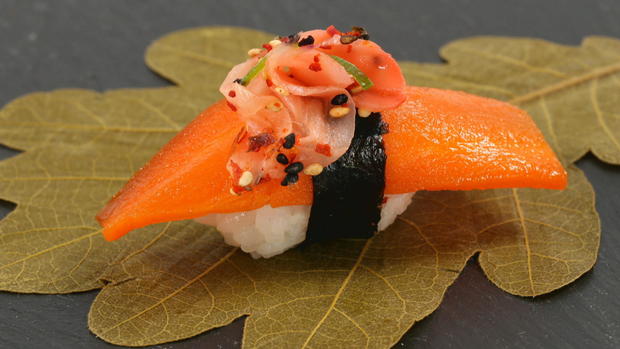 New Jersey councilwoman shot and killed in vehicle outside her home

Michelle Obama's new podcast based on “The Light We Carry” book...