CBS News February 15, 2019, 9:59 AM Virginia middle schoolers are learning about blackface. Here's what they have to say.

Scandals at the highest levels of Virginia's government are forcing some of the state's younger residents to have difficult conversations about race. After a racist photo was discovered on Gov. Ralph Northam's 1984 yearbook page, he and the state's third highest-ranking official admitted they wore blackface when they were young men.

From some of the first slave landings, to the capital of the Confederacy, to more recent fights over historical monuments, Virginia has a long and complicated racial history. This week, students at Mary Ellen Henderson Middle School in Northern Virginia spent their civics class learning about the history of blackface.

For some students in Mr. Buck's 7th grade civics class, their governor's famous admission was news. So to help explore the issue, Mr. Buck showed a 2018 story from "CBS Sunday Morning" that looks back at the long and complicated history of the practice in America. Then, he asked them what they thought.

They said things like, "everyone should learn from your mistakes" and "we don't want history to repeat itself" and "I think we need to recognize that it's like wrong."
After class, CBS News' Michelle Miller talked about Gov. Northam and the day's lesson with Matthew Patrone, Zablon Tilahun, Saron Herey, Mia Rodriguez and Carey Heard.

When asked whether Gov. Northam should step down, all five raised their hands.

"If he owned up to it said sorry, this wouldn't be a huge deal and I feel like he wouldn't have to step down," Matthew Patrone said. "If he's lying, then we don't know what else he has been lying about as governor."

Zablon Tilahun said when he saw the picture on Northam's yearbook page, he thought, "how dumb would you have to be to like put paint on your face and then put it in your medical school yearbook and get it published."
In his recent interview with "CBS This Morning," Gov. Northam sparked a new controversy over Virginia's painful past when he referred to the "first indentured servants from Africa."

"We all know they were slaves 'cause they weren't paid and they were beaten up. And it's just – it was so scary because he's our governor," Matthew said.

"It was scary and also I'm Jewish. So that was also kind of like an eye opener for me, I feel like, because there are still people that are anti-Semitic, anti-black, anti-whatever," he said.

All agree that it's important to talk about these issues in order to get them resolved but don't necessarily think Americans have been doing that.

"They haven't put their self in someone else's shoes, I don't think," Mia Rodriguez said.

Carey said he was called the n-word as early as third grade and said his school wouldn't deal with it. He wants things to be better so that his sister doesn't have to go through what he did.

"What surprised me the most is that like people still think that it's fun to still do it, to do blackface, even though it has a really bad history behind it," Saron Herey said.

Henderson Middle School has a diverse student body and struggles to ensure the school is a safe space. Its had controversies over racial slurs and symbols, but these kids say that talking about the problems at school has helped make it better. 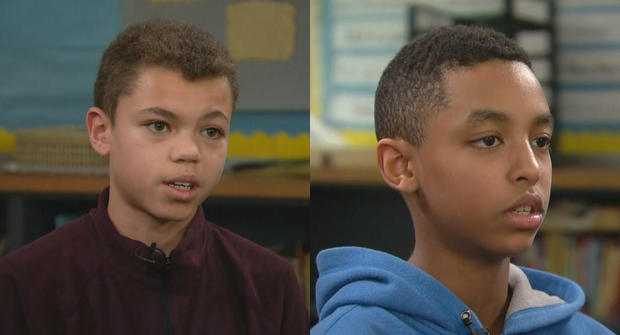