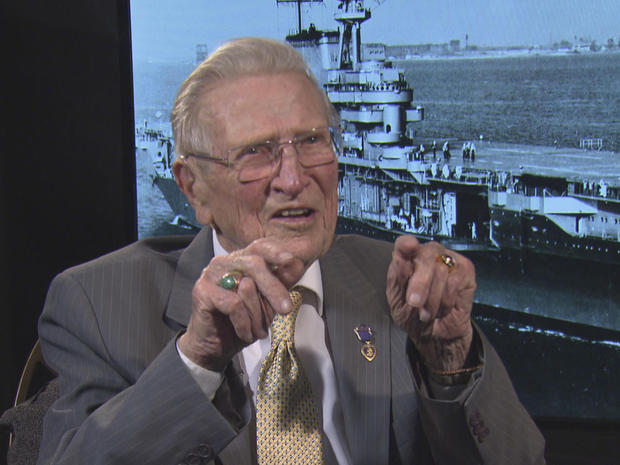 The research vessel Petrel is perched on a spot in the South Pacific Ocean that was anything but peaceful 77 years ago. Then, it was the scene of a major World War II battle between the U.S. and the Imperial Japanese Navies. For the U.S. aircraft carrier, Hornet, it would be her last battle.

Now, researchers are revealing Petrel found the wreckage of the USS Hornet in late January – exactly what they were looking for. The ship was found more than 17,000 feet below the surface, on the floor of the South Pacific Ocean near the Solomon Islands. The USS Hornet is best known for launching the important Doolittle Raid in April of 1942 and its role in winning the Battle of Midway.

Richard Nowatzki, 95 now, was an 18-year-old gunner on Hornet when enemy planes scored several hits, reports CBS News' Mark Phillips.
"When they left, we were dead in the water," Nowatzki said. "They used armor piercing bombs, now when they come down, you hear 'em going through the decks … plink, plink, plink, plink … and then when they explode the whole ship shakes."
With 140 of her crew already dead, the order was given to abandon ship. The Hornet went to the bottom – three and a half miles down – which the crew of the Petrel has been scanning with a deep-sea sonar drone that sends back live pictures.

The drone brought back an image of something down there that's about the right size in about the right place. It looked like her but lots of ships went down around here. To be sure, they needed positive identification, which they got when they saw the Hornet's naval designation: CV-8.

"CBS This Morning" was able to share the discovery in real time with Richard Nowatzki in California – even finding the gun he was on during the attack.

"If you go down to my locker, there's 40 bucks in it, you can have it!" Nowatzki joked.
Nowatzki has enjoyed a long life since that day. Seeing the Hornet again and the evidence of the men who served — a jacket hung on a hatch, somebody's wash kit complete with toothbrush – naturally made him reflect on those who hadn't been as lucky.
"I know I've been a very fortunate man," he said. "The actual fact that you can find these ships is mind boggling to me … I want to thank you for honoring me this way."
But it's the crew of the Petrel who were honored to find the Hornet and the final resting place of so many of her brave crew. Another wreck, and in turn, another war grave has been discovered. Its exact location is kept secret to protect it, but the memory now has a place and the loss has a memorial. 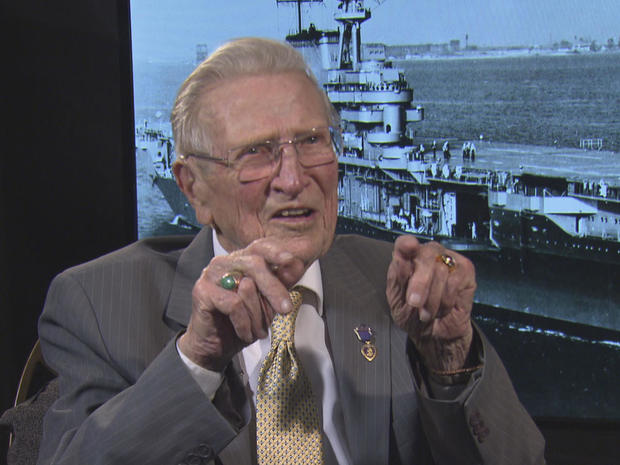