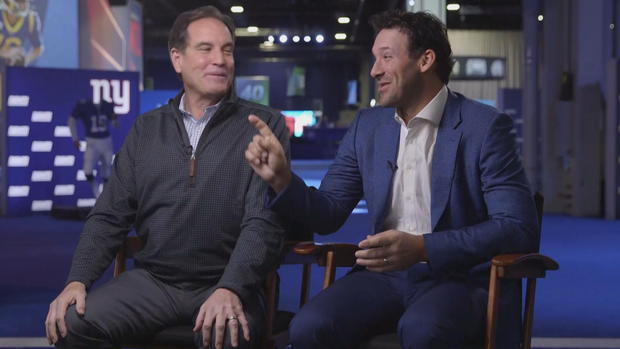 In many ways, the Super Bowl announcer team is like the Patriots-Rams match-up itself – the Super Bowl veteran and the rookie. This is the first Super Bowl that former Dallas Cowboys quarterback Tony Romo and longtime sportscaster Jim Nantz will be together in the booth. The two have called NFL games on CBS for two seasons with Romo quickly earning a reputation for predicting plays right before they happen. That unique talent was on display during the recent AFC Championship.

"Is that like a rush that you get when you were playing in a good game?" "CBS This Morning: Saturday" co-host Dana Jacobson asked Romo of his predictions that had fans and players alike applauding his clairvoyance.

"You know, that was probably as close I would say as I've ever felt. As a player – it's hard to ever emulate that because you are putting your body on the line," Romo said. "But in the booth, I feel like Jim's body's on the line … I feel like that game was as close to, like, feeling like you won in the NFL. I mean, you just felt, you know, pure joy afterward 'cause we had such a good game."

For Nantz, calling the game with Romo has turned the job into something else.

"You walk out of every show knowing whether or not everybody was in sync and it was a success …That wasn't just the AFC championship game. Since Tony came on board, we're just enjoying it so much … I can't explain it … You're almost oblivious to the fact that you're on television. You're watching a game with a buddy," Nantz said.

One tweet said, "Tony Romo needs to preface everything he says with 'Spoiler Alert.'"

"Obviously I have the front row seat to how Tony's brain operates, okay. And it's a fast, fast brain, beautiful mind is what it is. And he sees things so quickly. That is part of the magic. It really speaks to Tony spending a lot of time in the film room," Nantz said.

Romo said it's the culmination of a lifetime spent watching and playing the sport.

"I can see certain things now in three minutes that would have taken me two hours to figure out when I was younger… And it's just nothing more than you have a history of formations, defensive looks, that coach's background … you just spend your life studying something and then you hope to make it look simple," Romo said.

And Romo's excitement in the booth? It's genuine, and a bit infectious, according to Nantz.

"There's nothing that's phony, or fake about it …Tony's enthusiasm is the real deal," Nantz said. "I mean, a lot of people said that I sound a whole lot different next to Tony and I think he's raised everybody's game."

Despite that genuine enthusiasm, Romo said it wasn't until this year that he stopped missing being on the field.

Despite decades more experience as a sportscaster under his belt, Nantz said he doesn't really have any advice for his partner ahead of his first Super Bowl.

"There's no question he's ready for this day. America can't wait to see the game and hear what I called 'em last week, Romostradamus," Nantz said.

Another thing Romo is known for is his pre-game routine of singing to loosen up his voice.

"It's unique and you know what? It makes it fun." 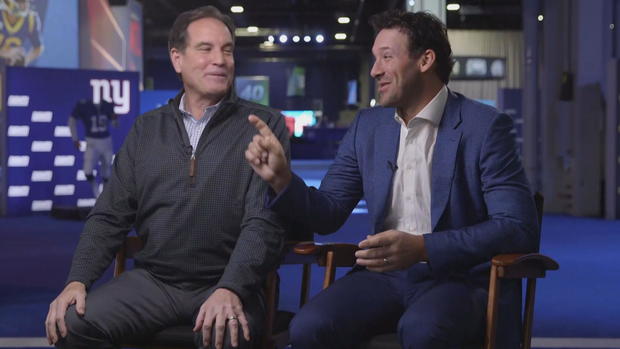