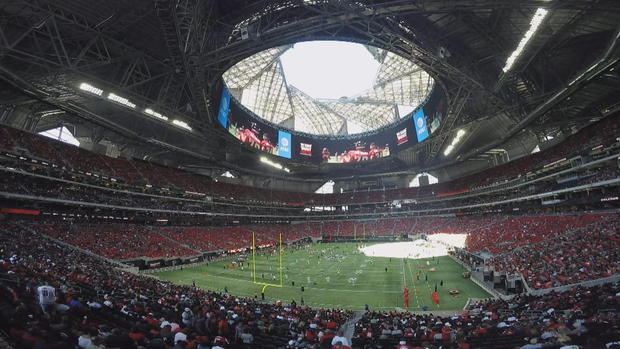 The New England Patriots and Los Angeles Rams will face off on Super Bowl Sunday inside Atlanta's dazzling $2 billion Mercedes-Benz Stadium. In some ways, it's the real star of the big game.

In 2017, nearly 5,000 pounds of TNT dropped the old Georgia Dome, home of two Super Bowls. By then, construction on its new next-door neighbor was finished, reports CBS News' Mark Strassmann.

The state-of-the-art stadium cost big money – most of it, Arthur Blank's money. He's one of the co-founders of Home Depot and the owner of the Atlanta Falcons.
"We wanted to build something iconic for Atlanta and iconic for sports," Blank said. "Turned out to be more pricey. I understand the word iconic. It equals cost now, and schedule. You know, we'll put that in the –the dictionary going forward."

In this stadium, going forward means looking up – way up – at two marquee highlights in particular: the halo, a dazzling 360-degree HD video wall that circles the stadium and above that the oculus, a retractable roof.
"Basically row one of the stadium. You encircle that, that's how big the opening is of the roof," Jenkins said.

The stadium is almost six stories tall and just shy of 1,100 feet around, roughly as long as a quarter-mile high school track. The halo ring hangs from the circular, retractable roof. You've never seen anything like it. There are eight translucent panels or "petals." Each one weighs over one million pounds, about the weight of a 747 airplane.
In the stadium's security operations center, Peter Figueira opens the roof with a computer and a steady hand. It's opened by a dead man's switch, meaning if Figueira's finger comes off it, the roof stops.
What happens next is an optical illusion. When the roof opens, it looks like a pinwheel or a camera lens opening. Actually though, each of the eight translucent panels slides straight back on two parallel rails. Start to finish, the roof takes eight minutes to open. Those massive petals end up on exterior decks.
Arthur Blank is open to hearing fans agree his stadium was worth every penny.

"Well, I think what'll happen inside is – the legacy. The building itself is – is a legacy building and, you know, you just think about what's the right thing for the next 20, 30, 40 years, Blank said. "You just don't say no to good ideas."

In the nearly $2 billion-dollar building, a hot dog costs just $2 and so does a refillable soda. That's it. No Super Bowl sticker shock.

They plan to have the roof open on Sunday if the weather holds up so spectators will be able to see the stadium in all of its glory. 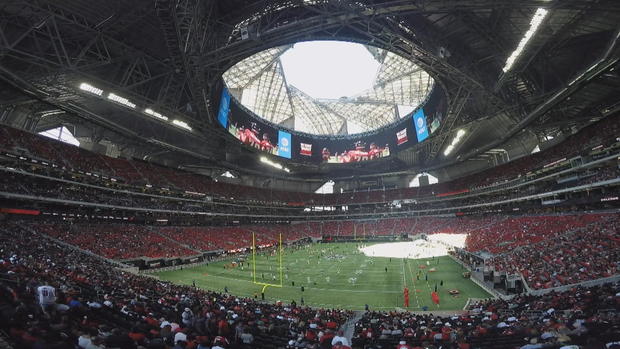