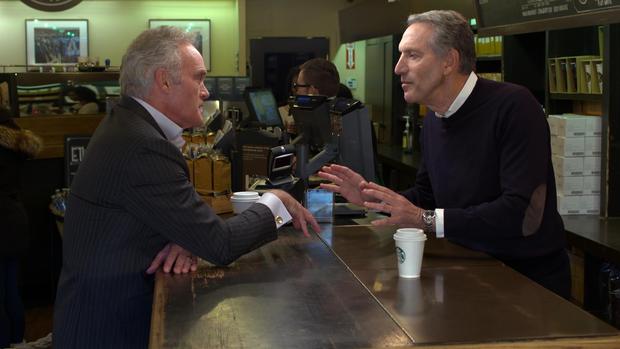 Starbucks CEO Howard Schultz left his company seven months ago which led many to wonder what the socially conscious executive was planning. To Schultz, Starbucks was never just a coffee shop. He saw his stores as meeting halls where customers came to chew over the great issues of the day. His activism is rooted in a rags-to-riches life. And tonight, Schultz reveals traumas he has never discussed publicly. At the age of 65, he is preparing for the greatest challenge of his life. Many believe that Schultz would run for president as a Democrat. His announcement tonight may come as a surprise.

Howard Schultz: I am seriously thinking of running for president. I will run as a centrist independent, outside of the two-party system we're living at a most-fragile time not only the fact that this president is not qualified to be the president, but the fact that both parties are consistently not doing what's necessary on behalf of the American people and are engaged, every single day, in revenge politics.

Scott Pelley: Why run as an Independent? Your views have always aligned with the Democratic Party.

Howard Schultz: That's true. I've, you know, I've been a lifelong Democrat. I look at both parties– we see extremes on both sides well, we are sitting, today, with approximately $21.5 trillion of debt, which is a reckless example, not only of Republicans, but of Democrats, as well, as a reckless failure of their constitutional responsibility.

Scott Pelley: Do you worry that you're going to siphon votes away from the Democrats and, thereby, ensure that President Trump has a second term?

Howard Schultz: I wanna see the American people win. I wanna see America win. I don't care if you're a Democrat, Independent, Libertarian, Republican. Bring me your ideas. And I will be an independent person, who will embrace those ideas. Because I am not, in any way, in bed with a party.

We met with Howard Schultz this month in his adopted hometown of Seattle. It was here, in 1981 that he arrived as a stranger in the Pike Place Market to visit the original Starbucks, just a tiny store that sold coffee beans.

Scott Pelley: You were selling coffee makers, living in New York, and this was one of your customers. Why did you come out here to visit them?

Howard Schultz: The thing is, I had never heard of Starbucks. And they were buying a ton of these products. And I just thought I gotta come to Seattle and see who this company was.

How he created the phenomenon we know is a story longer than the line at Starbucks. Suffice to say Schultz got a job behind this counter. He installed an espresso machine. And in 1987, with borrowed money, he bought the shop.

Scott Pelley: How many stores are there today?

A sweet success with a few bitter notes. Starbucks almost went broke in the 2007 financial crisis.

And last year, a store manager set off a furor when she called police on African-American men who were just hanging out at a table. Schultz closed all the U.S. stores for hours of racial bias training. Race had been an issue even before, when Schultz asked employees to talk to customers about racial justice.

Howard Schultz: We had a moral obligation as a company to discuss this.

Scott Pelley: And, then, you were excoriated for having a coffee shop tell people what it thinks about humanity.

Howard Schultz: The execution was flawed. And who owns that execution? I do because I was the one who was pushing us to not play it safe.

But from the beginning his 350,000 employees caught a break with Schultz's social agenda.

Schultz likes to say he created the company his impoverished parents never had the chance to work for.

Howard Schultz: When I read statistics that says that over 40 percent of the American people don't have $400 in the bank and only a crisis away from bankruptcy, or that five and a half million kids in America, many of whom are African American and Latino, are not in school and not in work and don't have a chance, and one out of six people in America are food insecure, this is what I think about.

Those grim numbers describe his own childhood.

Howard Schultz: This place has never left me. I think it has defined my character, my vulnerability

Schultz took us back in time to his boyhood home,

Scott Pelley: And this is the way up to the seventh floor.

A Brooklyn, New York, public housing project. His family was already poor when his father was injured on the job. With no insurance, they were destitute. And bitterness led to violence.

Scott Pelley: Your father beat you– with his fists.

Howard Schultz: There were moments where there was physical abuse, yes.

Scott Pelley: He beat you up, when you were taking a shower. And you ended up crumpled on the floor of the shower, watching your blood go down the drain. At that moment, you thought what?

Howard Schultz: I was 15. I was disrespectful to my mother. He came home and– beat me to a pulp. I couldn't go to school for a couple days. I was angry, upset.

Scott Pelley: Did you hate him?

Howard Schultz: I'm sure there were moments when I did. And then there were glorious moments of being in the right-field bleachers at Yankee Stadium with him. There is a level of hate that does emerge. But it didn't stay.

His journey is mapped in a new autobiography titled "From the Ground Up."

Howard Schultz: She was. And my self-esteem came from my mother. And I could say that if– if my mother was here, if my mother– for her, it would just be the greatest moment of her life, to think. Because one of the things that is, has been so hard for me is that both my parents didn't– did not see my success at Starbucks. maybe I'm here because of her.

Scott Pelley: Well, let me see if I can find out where you are on some of the issues that are pressing in the country. Immigration.

Howard Schultz: The country first and foremost is based on humanity, fairness, goodness, we have been for 200-plus years a country of immigrants. And for the 11 million people here unauthorized, there should be a fair and equitable way for them to get in line, pay the taxes, pay a fee, and become citizens of the United States.

Scott Pelley: Every American deserves the right to have access to quality health care. But what the Democrats are proposing is something that is as false as the wall. And that is free health care for all, which the country cannot afford.

Howard Schultz: I would not have given a free ride to business, from 35 percent or 37 percent to 21 percent. It would've been more modest. But I would've significantly addressed the people who need tax relief the most, which is the people I talked about earlier, who don't have $400 in the bank.

Scott Pelley: Many people are going to ask what does the coffee entrepreneur know about being commander in chief?

Howard Schultz: I have a long history of recognizing, I'm not the smartest person in the room, that in order to make great decisions about complex problems, I have to recruit and attract people who are smarter than me and more experienced, more skilled, and we've got to create an understanding that we need a creative debate in the room to make these kind of decisions.

His world view is shaped by his experience as a global CEO.

Schultz formed his alliance with his wife Sheri when they were married more than 36 years ago. Today, they have a son and a daughter, two grandchildren and another on the way. Sheri schultz oversees the family's $200 million charity that links disadvantaged youth and veterans to jobs.

Scott Pelley: This is a long, rocky road, running for president. Is this something you wanna do?

Sheri Schultz: Well, it, it wasn't in my plan, my long-term life plan for sure.

Scott Pelley: Did he tell you or did he ask you?

Sheri Schultz: No, he asked. He came to the family. We knew it was serious–

He's still asking himself whether to run. But he has assembled a campaign team and he's done the homework.

Scott Pelley: Can you get on the ballot in all 50 states?

Scott Pelley: Would the stores be part of this? Is there going to be a Schultz 2020 button on every green apron across the country?

Howard Schultz: Uh, no there would be a complete separation between me and the company.

Scott Pelley: What we know is that no independent has ever come close to winning.

Howard Schultz: What we know, factually, is that over 40 percent of the electorate is either a registered Independent or currently affiliates themselves as an Independent. Because the American people are exhausted. Their trust has been broken. And they are looking for a better choice.

Scott Pelley: What effect do you think being Jewish would have on your campaign?

Howard Schultz: I have great faith in the goodness and kindness of the American people. We elected an African-American president. I'm old enough to remember in 1960 when John F. Kennedy was running and there was an outcry of hate that no one Catholic should be president. I am Jewish, I have faith in God. I am not running as a Jew if I decide to run for president I'm running as an American who happens to be Jewish.

Scott Pelley: Your net worth is something close to $3.5 billion and Forbes magazine would tell you that that's more money than Donald Trump has. Are you willing to spend what it takes to win?

Howard Schultz: Well, I'll say it this way we'll be fully resourced to do what's necessary.

Scott Pelley: Winning could cost $300 million, $500 million. Do those numbers change your mind?

Scott Pelley: Would you release your tax returns?

Howard Schultz: I will. We can do it today, if you want Scott.

Scott Pelley: You know it's 'on' after this interview. President Trump is gonna be tweeting by about 8:00 Eastern Time.

Howard Schultz: I think, like most people, I'm, I've become bored with President Trump and his tweets. 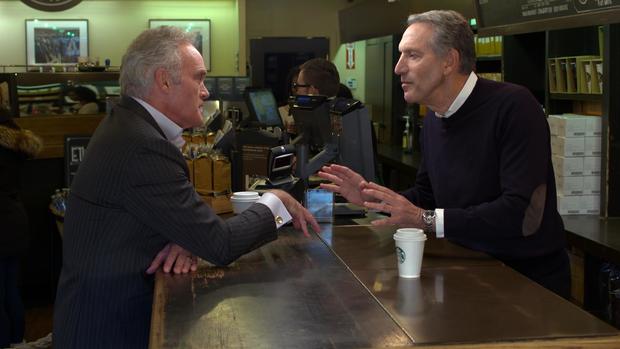 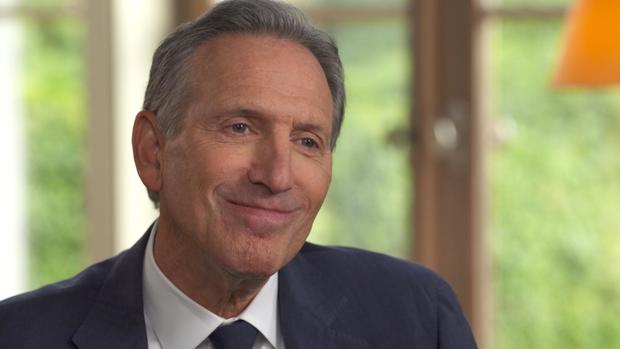 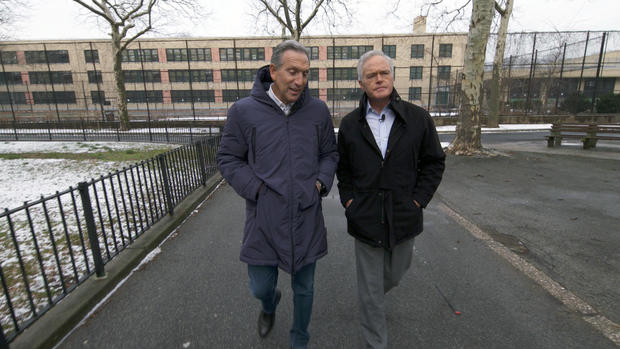 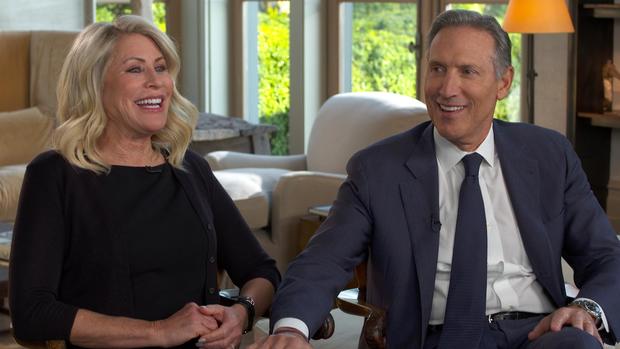 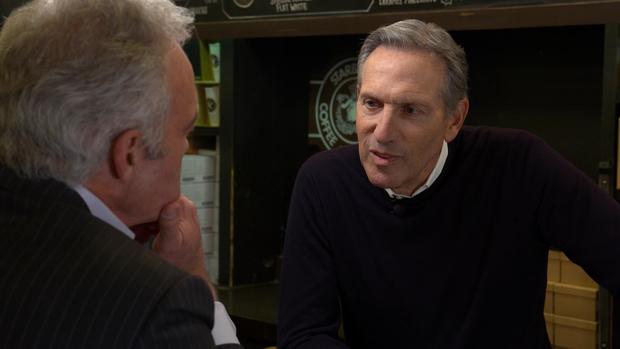 Woman identified 37 years after she was found dying next to...

Biden and McCarthy set to meet amid debt limit standoff