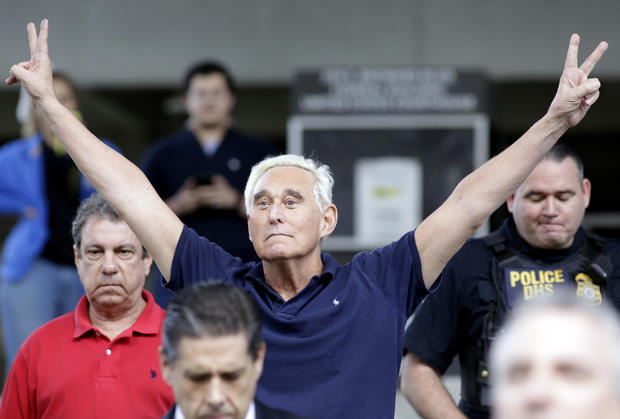 CBS News January 26, 2019, 6:33 PM Roger Stone says campaign officials listed in indictments "have an ax to grind against me"

A longtime associate of President Trump is maintaining his innocence. Roger Stone insists he is not guilty of charges outlined in a federal indictment and he's blasting an early-morning FBI raid on his Florida home. Stone spoke to CBS News justice and homeland security correspondent Jeff Pegues.

Stone walked out of his Fort Lauderdale home on Saturday and immediately dismissed speculation that he shared information about the WikiLeaks disclosures with then-candidate Trump in 2016.
"Who were you communicating with then if it wasn't the president?" Pegues asked.

"I wasn't," Stone said. "Those two assertions regarding Campaign Official 1 and Campaign Official 2 are incorrect. They are false. Now that doesn't mean that the special counsel can't induce somebody to say that, but they would be people who are easily impeachable, because they were either seeking a reduction in their sentence or because they have an ax to grind against me. This will all come out at trial."

After emerging from the courthouse on Friday, the flamboyant political operative did a series of cable network interviews dismissing the charges against him.

And he sharply denounced the FBI for the arrest at his home.
"I believe that I will be vindicated in court, but I am 66 years old, I do not have a valid passport, I do not own a gun," Stone said. "They'll have all of my records. There was no reason to treat me like Pablo Escobar."

The former Trump campaign advisor is charged with five counts of lying, one count of obstruction and one count of witness tampering.
The court papers allege that he shared information directly with the Trump campaign about WikiLeaks release of Democratic Party emails hacked by the Russians.
The stolen data was released at key moments during the 2016 election in an attempt to damage Hillary Clinton's campaign.
The indictment mentions multiple unnamed Trump campaign officials who were in contact with Stone about Wikileaks.
One person in particular directed a senior campaign official to talk to Stone about the releases.

President Trump did not answer questions about Stone on Friday.
But Saturday he tweeted: "If Roger Stone was indicted for lying to Congress, what about the lying done by Comey, Brennan, Clapper….and sooo many others."

Mr. Trump was referring to the former top law enforcement and intelligence officials who oversaw the launch of the Russia investigation in 2016. About two and a half years later it has led to more than 35 indictments or guilty pleas.

Stone said he will plead not guilty as he prepares to leave his home to be arraigned in a federal courtroom in Washington. 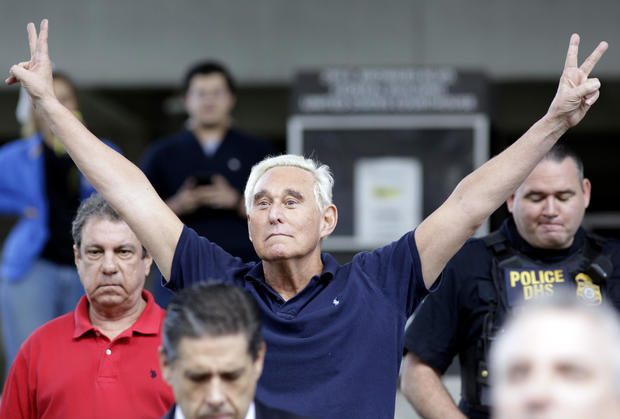