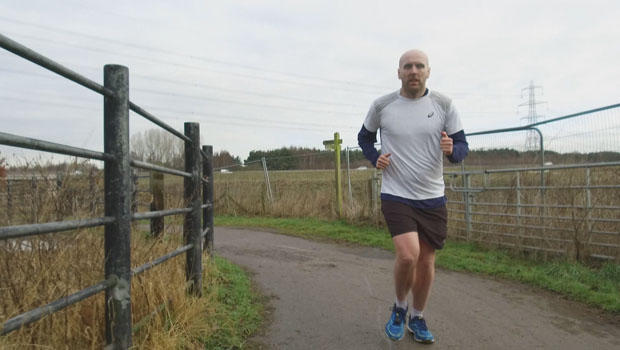 Like many athletes, Simon Wheatcroft loves chasing that runner's high. "I still get a real buzz from doing it," he said. He trains on this path near his home in Doncaster, a village in north-central England. But to really stretch his legs, he takes to the open road, sharing the solitude of his run with passing traffic. Now, any jogger knows that that can be a dangerous proposition, but for Simon it's especially so.

"I was born with Retinitis Pigmentosa, which is a genetic disorder where your vision deteriorates over time," he said.

He was diagnosed with this rare condition when he was about 11. For a while, he could still discern shapes and recognize some faces, but by age 27 it was all gone.

Correspondent Lee Cowan asked, "How did you handle that at first?"

"At first didn't handle it very well at all, you know? I was struggling to see, to move around, on a daily basis. But there's nothing you can do, you know? Your vision's slipping away; you can't stop that."

It really hit home the day he decided to propose. In 2009 he made his way to the U.S., with the hope of popping the question to his girlfriend high atop Half Dome in Yosemite National Park.

But halfway in, he realized the hike was more than he could handle.

"So, what were you thinking knowing you had to turn back?" Cowan asked.

"I was incredibly angry," Wheatcroft replied. "I was faced with an obstacle, [and] the only reason I couldn't overcome it was because I couldn't see."

He did end up proposing, in the shadow of Half Dome instead of on top of it, but what he also vowed was he would never let his lack of sight get in the way of his mobility again.

"Often in life we all seek control of our own destiny. And I felt like I needed to readjust, to gain control and learn to overcome these obstacles," Wheatcroft said.

He is a bit of an over-achiever; he's now run the New York City Marathon three times, and the Boston Marathon three times. He's even attempted two 100-mile plus ultra-marathons, all while testing different pieces of technology that he hopes one day will help the quarter-billion people around the world who are visually impaired either walk, hike or, yes, run without the help of a guide.

Wheatcroft said, "I wanted to prove that my mobility could be mastered, 'cause mobility is hard for a blind person. So it seemed like the only sort of viable decision was to learn to run alone."

"And were you a runner before?" Cowan asked.

So, just how does he do it? Well, he started out slow, first on a soccer field running back and forth between the goal posts.

To guide him he tried out an app called Runkeeper by IBM that uses voice commands to tell a runner time and distance.

Cowan asked, "When you were running back and forth, nobody could tell you couldn't see?"

"No, you know, even today I still don't particularly wear anything that says that I'm blind," he replied.

Soon, he upped it a notch, to a stretch of road about a third of a mile long that was closed to traffic. "Yeah, just running up and down and up and down. I peaked at ten laps of it," he laughed.

His confidence grew, but so did his boredom. One day, almost without thinking, Wheatcroft left that closed road and ran into traffic. He couldn't see the cars, but he could hear them, and reasoned if they got too close they'd just drive around him (or so he hoped).

"I was definitely overcome with emotion," he said. "I did burst into tears and think, wow, you know, I've really broken through a barrier there."

He showed Cowan how he stays near the curb, on the double yellow lines. He says he can actually feel the thickness of the paint through his sneakers.

"I'm trying to feel the lines and feel the difference between the one foot and the other," he said. "So, the feeling right now for the right foot feels very different from the left foot. And it's that difference that helps to guide."

Cowan asked, "Did the noise of the cars ever get you a little [scared]?"

"No, because I can hear them coming from a fair distance away."

It is easy to forget that everything Simon is doing is in the dark. Once while running Simon shot video of what it would look like for him. It's pretty un-nerving, seeing metal lampposts and street signs go flying by, knowing that he can't see any of them coming.

But he's memorized where each and every one of those obstacles is, by creating a mental map of his five-mile route.

He knows these roads so well he could practically drive them. In fact, he gave Cowan driving directions. He was flawless; Cowan, me not so much.

"So, you're about to sail by it … yep, yep you sailed by it!" Wheatcroft laughed.

"I just missed the turn!"

"So, go straight at the roundabout."

It's all pretty impressive, and Wheatcroft was getting noticed.

When the designers of Runkeeper heard how he had adapted their app to help him navigate, they featured him in an ad campaign.

In 2016 he teamed up with IBM to develop a guidance system that he nicknamed eAscot, after his guide dog. It was a prototype that with the help of GPS – gave Simon audio cues that kept him on course.

Its big test was a grueling 155-mile ultra-marathon, through the Namibian desert no less. He made it almost half way totally unassisted.

"The system worked," said Wheatcroft. "You know, there was a point where I'm just running through the desert alone and it's just, like, you know, this was a dream a few years ago, and now I'm actually doing it."

And then what happened? "On the second day, I managed to run into the only flagpole in the desert! Yeah, I took a big blow from the flagpole to the face."

It's not the first time he's taken a serious body blow.

The worst, though, was when he ran head-long into the twisted remnants of a burned-out car while training on his route near his house.

"I thought I was sweating really badly, but it turned out it was blood that was pouring down my arm," he said. "And that's when I pulled out my phone to call my wife and say, 'You've gotta come find me over here, it's bad.'"

Sian, the woman he'd proposed to on that ill-fated hike in Yosemite, told Cowan, "It was quite scary. We didn't know where he was, what we were going to find."

"So, what changed after that incident?"

"I think he became a little bit more careful," she said.

Sian isn't always keen on her husband pushing the envelope, especially since they have two young boys together, Grayson and Franklin. But she knows that, although it's dangerous, there is a bigger picture.

"He wants to change the world for blind people," she said. "And he wants to prove that they can do whatever they set their mind to."

"Yeah, and I think he can actually do it."

We were there when he opened a new piece of technology to test, called Aira.

"I feel all space-age," Wheatcroft laughed, putting on what appears to be a Google Glass on steroids. Aira is a new service that visually-impaired people can now subscribe to in the U.S.

It works like this: a camera on those glasses beams video back to a sighted agent, who then acts as the user's eyes. One agent demonstrated with a user: "Directly in front of you, Juan, is a sign. If you'll go slightly to the right, towards one o'clock, to avoid it."

Wheatcroft was the first in the U.K. to try it. He took it to a local market where the agent at the other end helped him browse the store shelves.

"Yeah, I'm after the one with the green top," he said in the milk aisle.

He told Cowan, "The reason I wanted it is, I wanted to demonstrate to as many blind people as possible to say, 'Look, look what we can get our hands on in a few months. This can remove all those difficult points in your life, and this could be a true independence piece of technology.'"

Wheatcroft thinks Aira just might be the breakthrough that could make his dream of running solo come true.

He is studying for his masters in computer science, and he hopes to continue perfecting more technology for the blind. "The goal is that these pieces of technology exist so people can do all these things and more, safely," he said. "They shouldn't have to take the risk that I took."

He's no hero, he says, nor does he consider himself an inspiration. He's a test pilot of sorts for those who are blind or visually-impaired who, like him, hope technology one day may brighten their world. 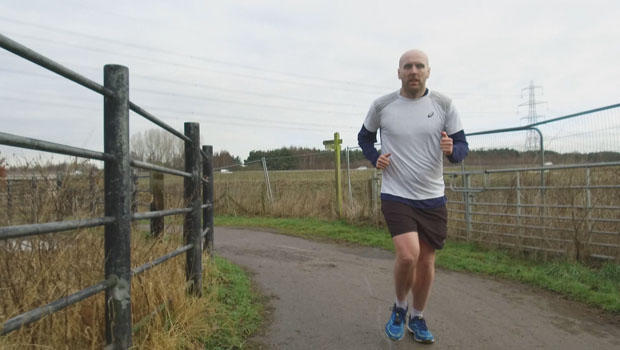 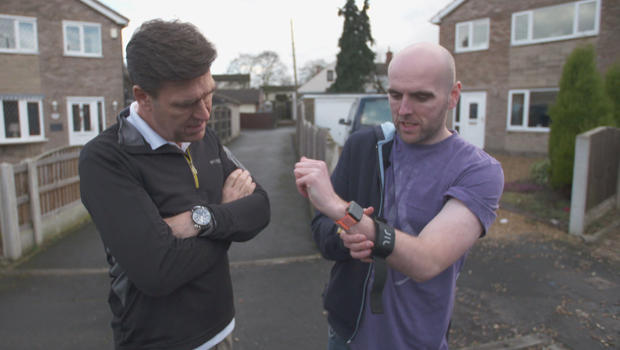 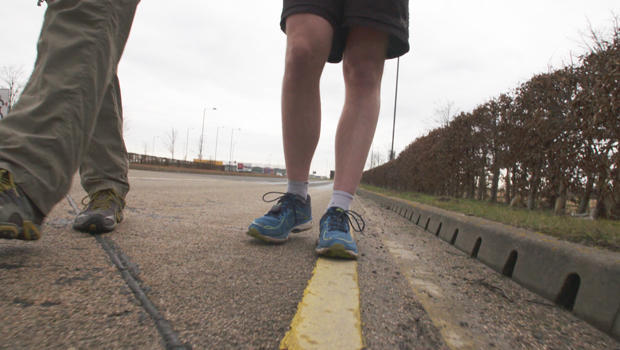 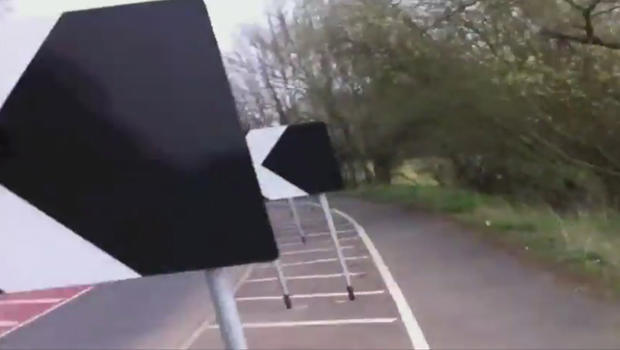 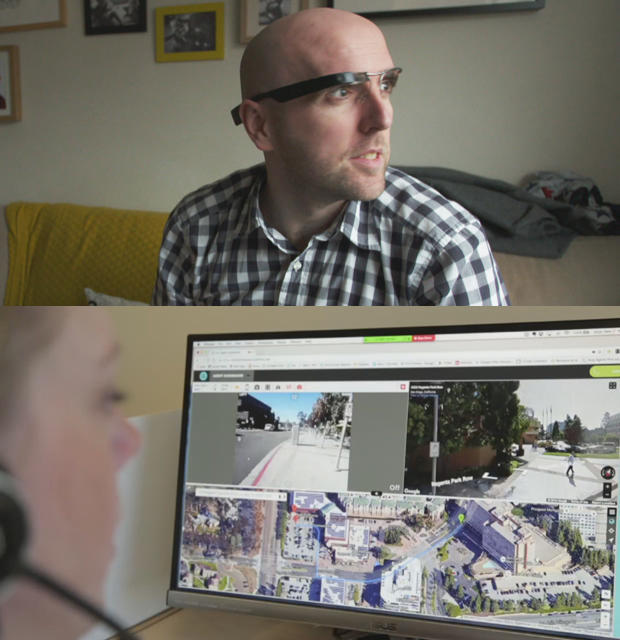