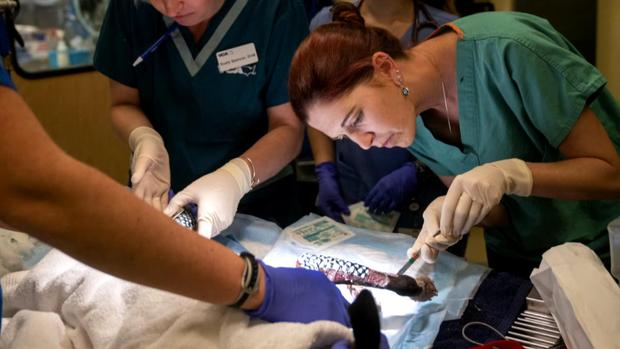 Oroville, Calif. — As 2019 begins, Northern California is still recovering from the Camp Fire, the most destructive blaze in state history. Eighty-five people died, along with thousands of dogs and cats.

When the fire broke out in Paradise, Mindy and Curtis Stark were 3,000 miles away from Olivia, their 8-year-old Boston terrier mix.

"I thought she perished," said Mindy Stark. "We really expected the worst because no one could get to her."

Their house was left in ashes and police finally found Olivia nearly a week later. The Starks reunited with their dog at a local clinic, but she was severely burned.

"She had such extensive injuries not only to her paws but her sides. Second- and third-degree burns, so it was quite painful for her," said Dr. Jamie Peyton of the UC Davis School of Veterinary Medicine.

Peyton decided to treat Olivia in a highly unusual way — with fish skins. She attached tilapia skins packed with high levels of collagen to the wounds, allowing them to heal better and faster, while reducing the need for painful bandage changes.

"It provides protection and pain relief covering all those nerve endings as well as providing an area for the skin cells to grab on and help heal the wound," Peyton said.

Peyton initially used fish skins to treat bears and a mountain lion burned in wildfires, but this is the first time the procedure has been performed on pets.

"There hasn't been a true standard of care for treating burns in veterinary medicine. We have to find better ways to treat these patients," she said.

Weeks later, Olivia's wounds are healing, giving hope to the Starks and their beloved pooch as they all get back on their feet. 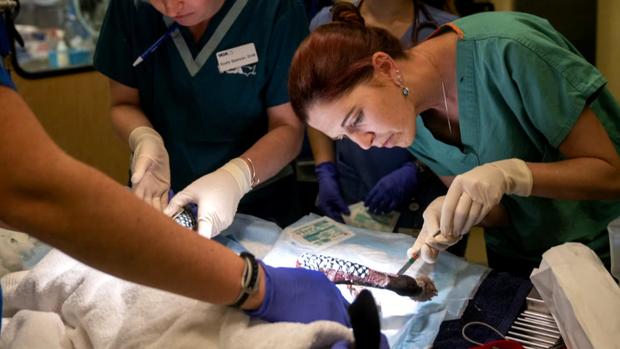 Here Comes The Sun: A Kirsten Dunst exclusive and an artistic...

School wrongly gave scholarships to 58 students. Now it's making it...

Meet the women who could be Biden's pick for next Supreme...

Yes, you must pay taxes on cryptocurrency trades. Here's how.