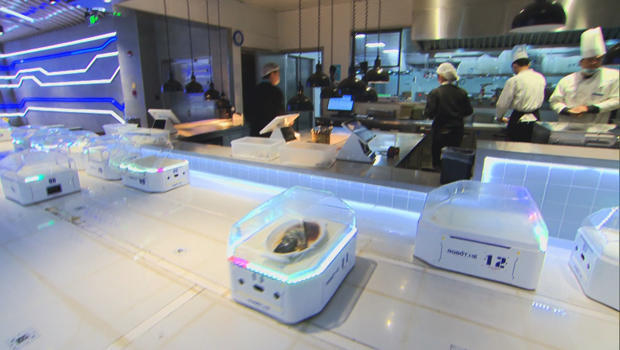 CBS News December 31, 2018, 9:42 AM From robot restaurants to automobile vending machines: The e-commerce revolution in China

It's lunchtime in Shanghai and there are plenty of cooks in one restaurant's kitchen. But when the food is ready, you won't see any waitstaff; instead, dishes are delivered by robot pods on a high-tech track that quickly guides them to their destination.

"This is so classy and fun, and the food is delicious, too," one customer told correspondent Ben Tracy.

The robot restaurant is inside a rapidly-growing Chinese grocery store chain called Hema (that's "hippo" in Mandarin), where almost everything is done digitally.

It's owned by Alibaba, one of the largest e-commerce companies on the planet. It also owns Alipay, the most-used digital payment service in China. Its chairman, Jack Ma, is now trying to reinvent brick-and-mortar retail by fully merging it with e-commerce, designing physical stores around our smartphones. He calls it "new retail."

That's because China says 98 percent of its internet traffic comes from cellphones, compared to just over 40 percent in the U.S.

The entire experience at these stores is based around their app. One can scan every single product that they have on the shelves for all sorts of information. For instance, by scanning a head of lettuce, you can find out which day it was delivered to the store, at what temperature, and on which truck. They even give you recipes for what you can make with it.

The stores will even do your shopping for you.

Online orders show up on workers' devices. They grab the goods off the shelves, and a conveyor belt then whisks the bags to the back of the store. The food is boxed up and rolled out to a delivery driver, who then brings it directly to the customer's house, all in about 30 minutes.

He says China is two to three years ahead of the U.S. when it comes to merging e-commerce and traditional retail.

"All of the new concepts for retail is starting with the mobile phone at the center of the experience, while in the United States most of the retailers, like a Walmart, are trying to force an e-commerce experience onto brick-and-mortar," Rein said.

Amazon does have its Amazon Go stores, where purchases are made through their app and no checkout is required. But in roughly the same time that Amazon launched eight stores in the U.S., Alibaba has rolled out 100 Hema stores in China, where you can even pay with facial recognition, because nobody here carries cash.

Have there been problems with growth this big and this fast in China? "Hema has become so popular and grown so fast in the past year that we are starting to hear concerns about quality control, especially in their produce," Rein said.

And now its competitors, such as jd.com, are launching their own brick-and-mortar grocery stores, aiming for the higher end of the market.

But Alibaba hopes to remain in the new retail driver's seat. It's even changing the way people buy cars. Chinese consumers can now browse makes and models on an app on their phones, and then go to a giant automobile vending machine for a test drive. They pick up a car at an unmanned kiosk, and drive it for up to three days, all without ever having to deal with high-pressure sales people.

Tracy asked, "Is this also the future of retail in the U.S.?"

"What's happening in China with online-to-offline shopping and shopping through your mobile phone is the future of global retail," Rein replied.

That future may be more convenient and efficient, but as is the case with that robot restaurant, we may also find we miss a certain human touch. 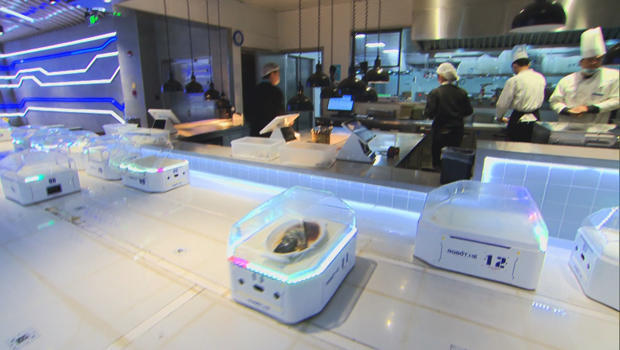 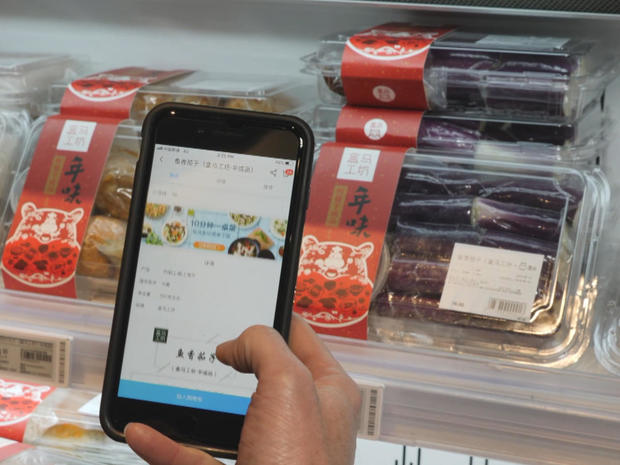 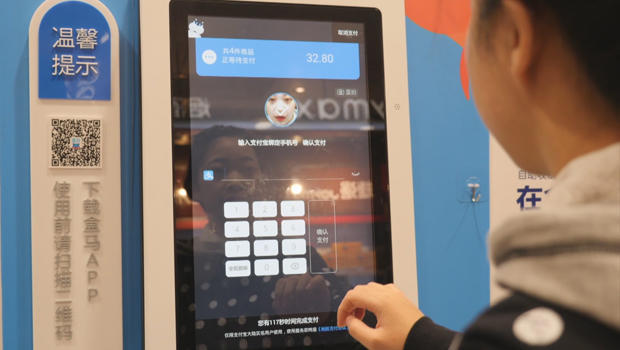 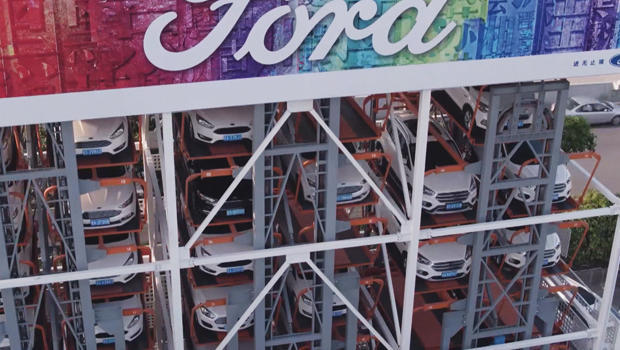 CBS News Radio is the gold standard of news. The stations that matter make CBS News Radio the first choice for news and information. Call in Phone Number: 1-877-913-3889
Contact us: Tellmyd[email protected]
©