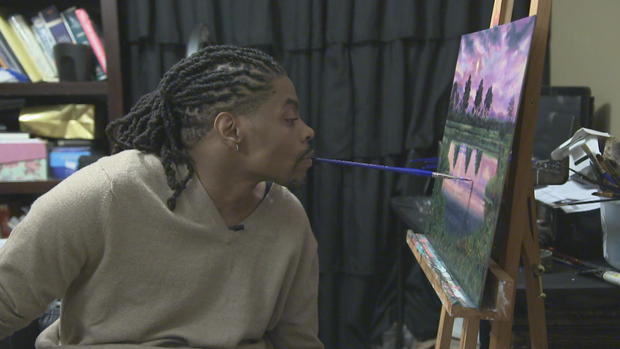 Antonio Davis said his life was headed in the wrong direction when he was shot at close range and nearly killed 24 years ago. What he didn't know was that his life was about to take an extraordinary turn with purpose. Though paralyzed from the chest down, he became an accomplished painter.

"I'm just creating. I'm just freeing my mind and what comes out is my true emotions," Davis told CBS News correspondent DeMarco Morgan. "It's a passion. It's an obsession. I love it that much. And I hope it shows in the work."

That work includes landscapes, still lifes and portraits painted from a very different perspective: the 43-year-old paints with his mouth. When Davis was 19 years old, his friend shot him during a fight, leaving him paralyzed. He thought his life was over.

"I didn't know anything about people in wheelchairs … I didn't have a comprehension of the physical requirements of the daily living with somebody with that quality of life," he said.

The teenager was placed in a nursing home to learn how to adjust to his new wheelchair-bound life. It was there that he met Juanita Butler.

Butler told Davis she was going to get him out of there. She did, and a year later they married.

"I made the best choice in the world when I said, 'I'm getting you out of this nursing home.' I found somebody who's so special, who's like a diamond in the rough, and now he's shining," Butler said.

Shining through his art, something he's always loved but only really pursued after the incident. An occupational therapist suggested he try holding the brush with his mouth and after some convincing, he did.

Fifteen years later, his paintings are recognized worldwide and range in price from $5,000 to more than $80,000.

"Most don't believe it … because the level that I have gotten to in my artistry is where they say, 'You didn't paint that with your mouth,'" Davis said.

He presented a portrait of former President Barack Obama to the man himself.

"Oh, he loved it. The first response was 'I love that you didn't put the gray hair in there,'" Davis recalled.

The artist also gives back. He volunteers his time to teach and inspire art students on Chicago's South Side at Richard J. Daley Community College.

"I feel like me going out, mouth painting, showing the public, the community, that you can have a tragic accident, a tragedy that happened to you, and you could still be able to accomplish things," Davis said.

Davis said he's never asked the question "why me" and instead has always dared to do better. He's even forgiven the man who shot him.

"I have forgave that spirit behind it," he said. So his own spirit within could inspire those around him.

Davis said the shooting was a blessing in disguise. Had he not been in the nursing home, he may not have met his wife, Juanita. And if he wasn't paralyzed, he may have never pursued his passion for art. 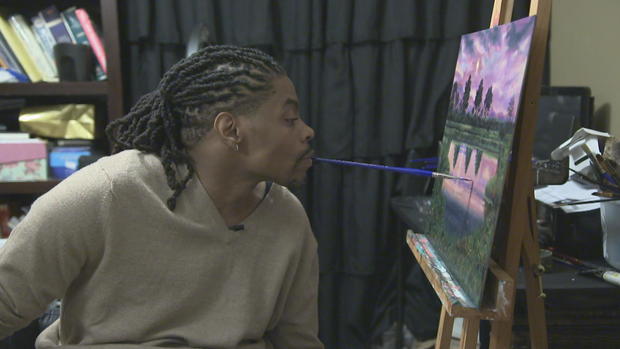