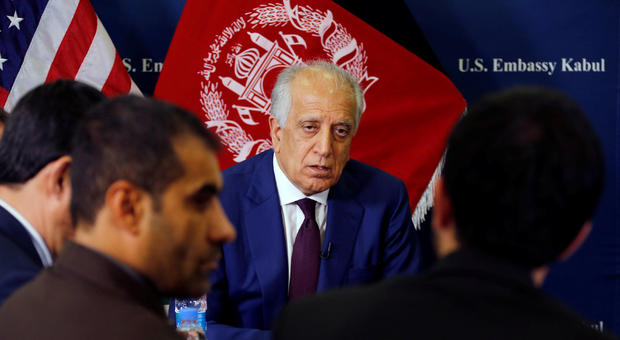 3rd round of U.S.-Taliban talks start without Afghan government reps.

The Taliban say they are holding another meeting on Monday with U.S. officials, this time in the United Arab Emirates and also involving Saudi, Pakistani and Emirati representatives in the latest attempt to bring a negotiated end to Afghanistan's 17-year war.

Khalil Minawi, director of Afghanistan's state-run Bakhtar news agency said on Twitter that officials from the United States, Afghanistan, Pakistan and the UAE held meetings on Sunday ahead of "the Pakistani-sponsored U.S.-Taliban meeting."

It will be the third round of direct U.S.-Taliban talks aimed at creating a roadmap for peace in Afghanistan to end the war that began in 2001 with the U.S.-led invasion to topple the Taliban regime.

While the Afghan government recently announced a new 12-member negotiating team to engage in peace talks with the Taliban and appointed a former interior minister as special peace envoy, no one from the Afghan government side was to attend the talks starting on Monday, reports CBS News' Ahmad Mukhtar in Kabul.

The series of direct Taliban-U.S. talks have raised a lot of concern in Kabul that the Afghan government could be side-lined in the name of a short-term deal with the Taliban.

The Afghan government has made no official comment on the talks in the UAE, but one Afghan official told CBS News' Sami Yousafzai that Kabul was "extremely disappointed" by not having a seat at the table as the future of Afghanistan is negotiated.

While they won't be at the table, members of the new Afghan team are in the UAE, and that in and of itself represents a significant step in efforts to get the two sides talking. So far, the Taliban have refused to hold direct talks with the Afghan government, calling it a puppet of America and insisting only on negotiating with the U.S.

Also significant is the presence of the Saudis and Emiratis — both have significant influence over the Taliban — apparently geared toward pushing the insurgents toward concessions that could eventually lead to face-to-face talks with Kabul.

Saudi Arabia, the UAE and Pakistan were the only three countries to recognize the Taliban government during its five-year rule that ended with their 2001 overthrow. Washington, meanwhile, has considerable sway over the Afghan government, which it heavily bankrolls. The U.S. has spent $1 trillion in Afghanistan since ousting the Taliban and the war there has become America's longest.

While the U.S. State Department has neither denied nor confirmed previous meetings with the Taliban, Washington's special peace envoy Zalmay Khalilzad previously said he has held several meetings with all Afghans involved in the protracted conflict — a reference that would include the Taliban, who control or hold sway in nearly half of Afghanistan.

A Taliban statement last month said they held three consecutive days of talks with Khalilzad in Qatar, a Mideast country where the insurgent group maintains a political office. Afterward, Khalilzad went to Kabul where he urged Afghan President Ashraf Ghani to cobble together a team that could hold talks with the Taliban with the intent of reaching an agreement on a "roadmap for the future of Afghanistan."

Khalilzad said he would like to see this agreement reached before Afghan presidential elections, scheduled for next April.

A senior member of the Taliban negotiating team in the UAE told CBS News' Sami Yousafzai that Khalilzad was coming to this new round of talks armed with some possible significant concessions, including the prospect of changes to the Afghan constitution and some form of Taliban representation in the nation's government.

Another senior Taliban official told Yousafzai that it was clear the Trump administration wanted to end U.S. military involvement in America's longest-ever war as soon as possible, leaving it, "up to the Taliban how to cash in on this golden opportunity."

Since his appointment in September, Khalilzad has tried to jumpstart peace talks and has made several tours of the region. Earlier this month, he held meetings in Islamabad. Pakistani Prime Minister Imran Khan later said Khalilzad asked Pakistan to assist in getting the Taliban to the negotiating table.

Khan said Pakistan would sponsor the UAE talks and insisted that a military solution is not the answer.

President Donald Trump has long accused Islamabad of taking billions of U.S. dollars while doing nothing to aid peace efforts and has assailed Khan since his election as prime minister last summer. Washington has suspended hundreds of millions of dollars in military aid to Pakistan.

Khan meanwhile has responded to Mr. Trump's rebukes by saying that his country was drawn into the war on terror although no Pakistanis were involved in the Sept. 11, 2001, terrorist attacks, and that the war has cost Pakistan $123 billion. Khan has also described the U.S. contribution of $20 billion to Pakistan as minuscule. 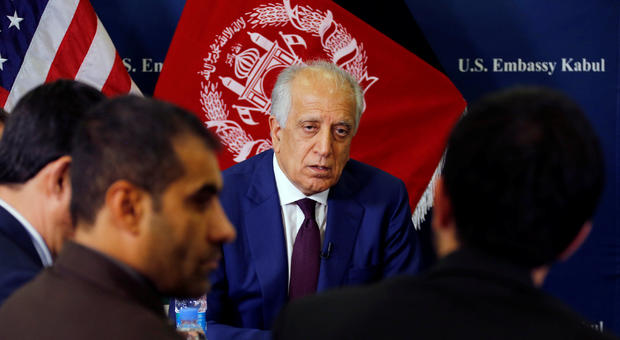 Hamsters in China put down after testing positive for COVID-19