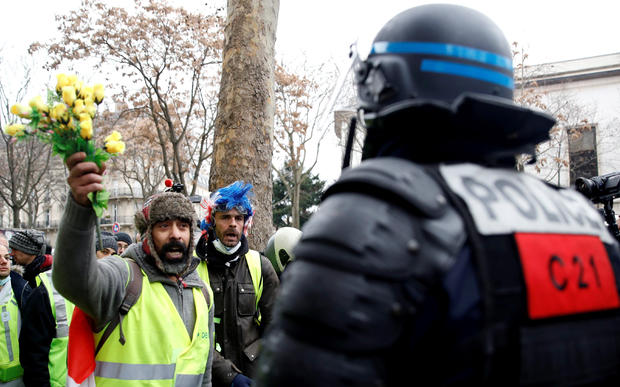 PARIS — Scuffles broke out between protesters and police in central Paris on Saturday on the sidelines of a largely peaceful demonstration, during the fifth straight weekend of protests by the "yellow vest" movement.

Riot police fired small amounts of tear gas to disperse groups of protesters who headed down the side streets off the French capital's famed Champs-Elysees boulevard, some with traffic still flowing.

About 8,000 police and 14 armored vehicles were deployed in Paris for the demonstration. Officials were trying to prevent a repeat of the violence seen in the city the past few weekends, CBS News' Roxana Saberi reported. Protests have recently turned violent, with protesters smashing and looting stores and setting up burning barricades in the streets.

Saturday's protest was far calmer in the morning, with riot police blocking off groups of protesters who attempted to disperse in side streets.

At least 21 people were detained in Paris before the protests began, police said.

Some protesters voiced anger at being restricted to a few blocks by police. "We're surrounded by CRS," said protester Lionel Toussaint, 53, who works in the heritage industry, referring to riot police. "I'm not armed. I only have Kleenex."

The "yellow vest" movement, which takes its name from the fluorescent safety vests French motorists must all have in their vehicles, emerged in mid-November as a protest against fuel tax increases. It soon morphed into an expression of rage about the high cost of living in France and a sense that President Emanuel Macron's government is detached from the everyday struggles of workers.

The movement has attracted a wide range of disgruntled people across the political spectrum, including some violent militants.

"Respect my existence or expect my resistance," read one banner held aloft by protesters who converged on the Champs-Elysees.

Pierre Lamy, a 27-year-old industrial worker, said the protests had long stopped being about the fuel tax and had turned into a movement for economic justice.

"We're here to represent all our friends and members of our family who can't come to protest, or because they're scared," he said. "Everything's coming up now. We're being bled dry."

Max Werle, a 56-year-old father of nine, said the protests were his first-ever demonstrations.

"I'm here for my children," he said, adding that his daughter had given birth in a fire truck on Monday because the local hospital in Loiret outside Paris had closed years ago.

"Yellow vest" protests were also being held in other parts of France, with no violent incidents reported by mid-day.

On Monday, French President Emmanuel Macron tried to quell the demonstrations by promising to raise the minimum wage and by offering some tax breaks. He has also canceled the fuel tax increase.

Paris's police department said around 1,000 demonstrators were in the city's streets Saturday morning — significantly fewer than in previous weeks.

It wasn't immediately clear why the numbers were lower. It could be due to Macron's concessions, the deadly attack in Strasbourg earlier this week, or frigid weather, CBS News' Saberi reported. 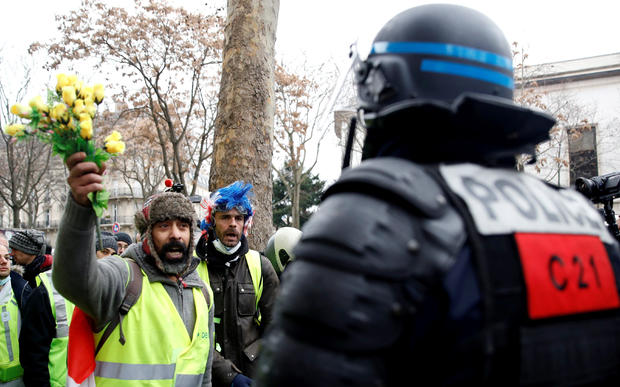