By Megan Cerullo MoneyWatch December 12, 2018, 2:46 PM For people with disabilities, a trend in "adaptive" clothing

The fashion industry is starting to care about people with disabilities. Popular brands and retailers including Tommy Hilfiger, Zappos, Nike and Target are leading the way in designing apparel, shoes and other products for consumers with non-standard body types, boosting an overlooked population's confidence — and their own bottom lines.

Americans with disabilities make up the third-largest market segment in the U.S., according to the federal Office of Disability Employment Policy. Collectively, they have disposable income of about $490 billion — that's nearly as much as the purchasing power of each of the top two segments, African-Americans and Hispanics, according to American Institutes for Research (AIR). Yet many mainstream retailers largely ignore them, leaving medical supply companies as the primary source of so-called adaptive clothing.

Simple clothing alterations, such as magnetic closures that replace buttons, snaps and hooks on shirts and jackets, can benefit people with a range of disabilities, while also expanding their wardrobe with stylish options, designers say. Other innovative design elements include adjustable hems on shirt sleeves and pant legs for individuals with limb differences, as well as openings in the backs of dresses that let individuals dress themselves instead of depending on a caregiver.

Catering to people with disabilities represents a two-fold opportunity for businesses, analysts say. "They are a vast consumer market for higher quality or innovative products and services, if you look at it through the lens of disposable and discretionary income," Michelle Yin, a principal economist at AIR told CBS MoneyWatch.

For apparel makers, offering products for people with disabilities can also have a halo effect on the sales of mainstream products, with consumers becoming increasingly conscious of a brand's ethical reputation.

"[P]eople like buying goods and services from companies that are seen as inclusive. It helps with their marketing and improves the bottom line," Yin said.

Molly Kettle, director of Zappos Adaptive, said the online retailer started focusing on the segment in 2017 in response to one customer's struggle to find footwear for her grandson, who has autism and can't tie shoes with laces.

"That sparked something in our employee to say we should be able to serve all our customers," Kettle said, alluding to the Zappos worker who spoke with the customer. "There is the need out there, and this is something that is viable," she said of Zappos Adaptive's business.

Zappos has partnered with Tommy Hilfiger, Nike and other brands to carry their lines of clothing and sneakers for consumers with special needs.

"Our primary goal is to serve customers, so if we are able to do so, that certainly represents a business opportunity," Kettle said.

An estimated one in five Americans lives with a disability, according to the U.S. Census. A Coherent Market Insights study predicts that the global market for adaptive clothing will approach $393 billion by 2026.

That commercial opportunity will lure more brands into the space, predicted Steve Lamar, executive vice president of the American Apparel and Footwear Association. "It's a trend that I have had more conversations about in the last 18 months than I have in the previous five years before that."

People with disabilities tend to spend more money on clothing, according to fashion designer Mindy Scheier, president and founder of Runway of Dreams, a foundation that advocates for greater inclusion in industry. "They're spending more than the average person on clothing becausenine times out of 10, they get their clothes tailored," she said.

Clothing specifically designed to meet their needs, on the other hand, is typically cheaper than custom-made items.

"The disability market should be considered a standalone market that businesses can advertise to and design products for, similar to the teenage market," Yin said.

Not even Scheier — who understands the transformative power of fashion — knew quite how important it was that her son, who suffers from muscular dystrophy, be able to wear jeans to school. He was used to dressing in baggy sweatpants that fit around his leg braces and one day asked why he couldn't wear the same kind of pants as his classmates, she said.

"That night, I ripped apart a pair of jeans and made modifications that allowed him to dress himself and wear his leg braces by creating an opening at the bottom of the pants," she said. "When I showed them to Oliver the next morning, there was such an immediate, visible change in him. His confidence and self-esteem changed, and I was in awe at the impact these jeans had on him," she said.

Even able-bodied consumers see value in some of the innovations that have resulted, like shoes that zip open in the back. Having an eye on the needs of disabled consumers can help companies top their competitors, economists said.

Scheier, who serves as an advisor to Zappos Adaptive, Tommy Adaptive, and other clothing lines, hopes the kind of clothing that suits her son will someday be mainstream. "My goal is to hopefully never have this conversation because it will just be another fit in industry no different from 'plus size,' 'maternity' and 'petite' because these are just different-shaped bodies that require modifications than what already exists," Scheier said. 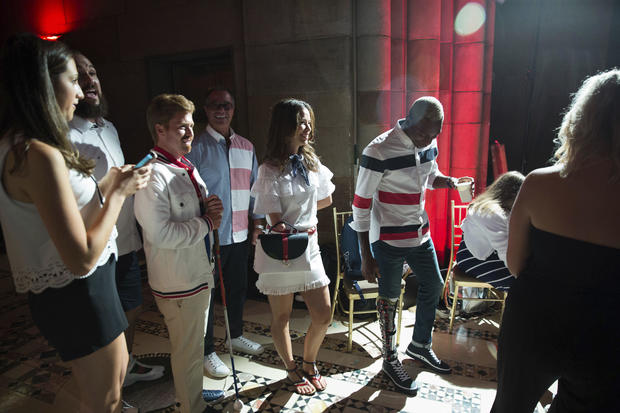 Marriott takes on Airbnb by expanding into home rentals