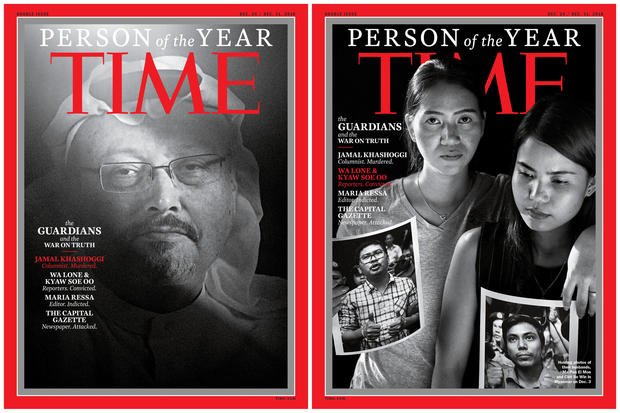 Slain Washington Post journalist Jamal Khashoggi and other journalists that Time magazine called "the guardians" were named Time's Person of the Year for 2018 on Tuesday. Khashoggi and the group were chosen over special counsel Robert Mueller, Russian President Vladimir Putin and President Trump, who were listed as finalists on Monday.

Mr. Trump was named the first runner-up Tuesday. Mueller was the second runner-up.

The other journalists named with Khashoggi were the Capital Gazette newspaper in Maryland, where five people were killed in a mass shooting earlier this year; imprisoned Reuters reporters Wa Lone and Kyaw Soe Oo; and Maria Ressa, founder and editor of a news site in the Philippines. Time recognizes the person or group of people who most influenced the news and the world "for better or for worse" during the past year.

"His murder has prompted a global reassessment of the Saudi crown prince and a really long overdue look at the devastating war in Yemen," Time's Editor-in-Chief Edward Felsenthal said on NBC's "Today" show. Khashoggi was the first deceased person named Person of the Year, Felsenthal said.

Reesa is an award-winning Philippine journalist who, along with the online news service she heads, has been sued for tax evasion. Her website has been critical of the government of Philippines President Rodrigo Duterte, and she claims the charges are politically motivated.

Wa Lone and Kyaw Soe Oo have been imprisoned for nearly a year in Myanmar after investigating a massacre of Rohingya Muslims. In June, four journalists and a sales assistant were killed by a gunman at the Capital Gazette newspaper.

In addition to Mr. Trump, Mueller and Putin, the magazine said six other finalists made its shortlist for this year. They were: 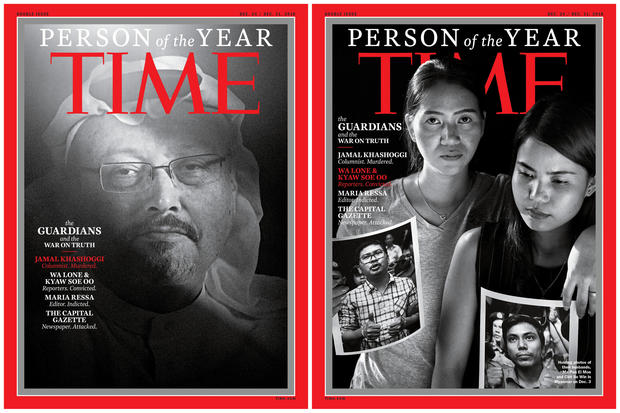