The S&P 500 index, which last week suffered its biggest drop since March, was down 0.7 percent in morning action. The Dow dropped 168 points, or 0.7 percent, and the tech-heavy Nasdaq was flat.

All three indexes have now turned negative on the year, with the S&P 500 showing the biggest loss.

Investors are questioning the strength of U.S. and global economic growth after a flurry of so-so economic indicators last week. The yield between the 3-year and the 5-year Treasury note flipped, which many investors take as an indication a recession is on its way.

Uncertainty over U.S.-China trade relations isn't helping. Even as the two nations declared a temporary truce in the tariff wars last week, President Donald Trump called himself "Tariff Man" in a tweet and a top executive from Chinese telecom giant Huawei was arrested in Canada at the request of U.S. authorities.

Apple suffered a setback shortly before the market opened Monday when a Chinese court banned sales of most iPhone models in the county as part of an ongoing legal battle with chipmaker Qualcomm, which accuses Apple of infringing its intellectual property. Apple shares slid 2.4 percent in early trading. 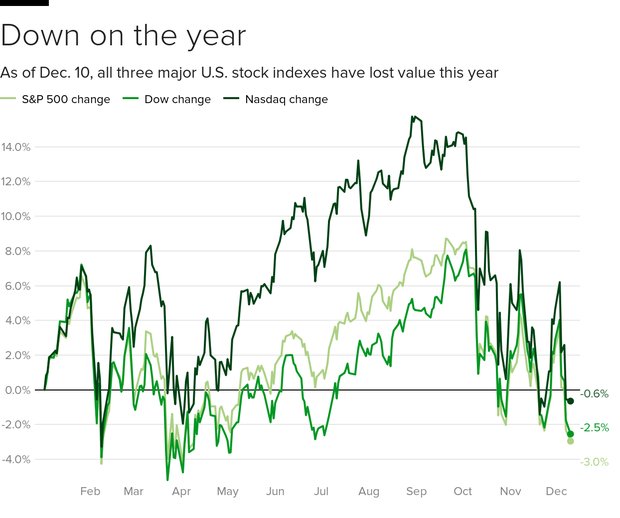 Surprise medical bills: How to ease the shock