WASHINGTON — For a fourth consecutive month, the number of migrant families apprehended by U.S. authorities in November for illegally crossing into the country from neighboring Mexico reached a record high for the Trump administration, according to government data. The U.S. Customs and Border Protection said 25,172 families were detained between ports of entry on the U.S.-Mexico border last month.

The figure is part of a four-month record-high streak of migrant family apprehensions during President Trump's tenure. In August, 12,760 families were detained along the southern border, followed by 16,658 in September and 23,115 in October.

Katie Waldman, a spokesperson for the Department of Homeland Security, said the steady increase is a "predictable result of a broken immigration system — including flawed judicial rulings."

"Bad decisions from the 9th Circuit are directly responsible for the more than 25,000 family units who violated our national sovereignty and are effectively immune to consequences for their illegal actions," she added.

On Friday, the U.S. 9th Circuit Court of Appeals upheld a temporary restraining order by a district court judge that blocked a White House directive which would make immigrants who cross into the U.S. illegally ineligible for asylum.

In 2018, in response to increased migration of families from Central America, the White House implemented a controversial family separation policy — which it was forced to rescind after a massive public uproar — and more recently, deployed more than 5,000 troops to the southwest border to provide logistical support to Border Patrol and National Guard units. Thousands of migrants, however, have continued to undertake the dangerous journey north, hoping to secure asylum in the U.S. and flee the gang conflict, gender-based violence and widespread poverty in the Northern Triangle, comprised of Guatemala, El Salvador and Honduras.

"In the first two months of fiscal year 2019, October and November, families and children made up 57 percent of all people apprehended at the border," she said. "And families on their own made up nearly half — 47 percent," Bolter said.

While she noted violence and poverty are the most common "push and pull" factors driving migration from Central America, Bolter said other circumstances are prompting many families in this region to set out for America, including a prolonged and severe drought that has hindered crop harvesting.

In addition to economic investment in the region, like some lawmakers haves advocated for, Bolter said the American government needs to overhaul the country's asylum system — which she said is overwhelmed with case backlogs. "There's hundreds of thousands of cases waiting to be heard in the asylum system," she said.

And the solution, she stressed, is not shutting down the system, but revamping it to make the process faster and reduce the mounting case loads.

"Something that might have more benefit on tempering the numbers would be measures that make the asylum system run more efficiently, which would have the effect of sending back more quickly people without genuine claims, but allowing in people with genuine claims," she said.

One of the recommendations in an exhaustive report by Bolter's organization is to allow so-called "credible-fear" cases to remain in U.S. Citizenship Immigration Services' asylum division for processing, rather than having them adjudicated in immigration courts.

Bolter said the government has to undertake concrete steps soon because she doesn't believe it has the sufficient resources to continue detaining tens of thousands of migrant families.

"The family detention capacity is limited. There's been some talk of creating new tent cities at some military bases to increase the capacity for housing families," she said. "But all of this requires increased funding." 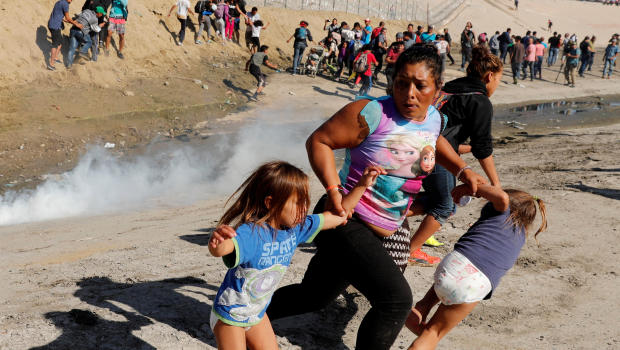