Hiring in the U.S. remains solid, employee pay is rising, holiday spending looks merry and bright, and companies across the land continue to mint money. On Wall Street, though, stocks are headed for a third straight weekly decline, with the Dow closing down nearly 560 points on Friday and other indexes also nosing down sharply. What gives?

Investors focus on the future, not the past, and what many see around the bend is a slowing U.S. and global economy. Domestic growth boomed between April and October, averaging a robust 3.8 percent. But forecasters say growth is sliding in the fourth quarter, to somewhere just north of 2 percent.

That doesn't mean Americans should batten down the hatches — economists still think the odds of a recession next year are low. Indeed, the economy could well defy expectations and gain speed in 2019, propelled by lower oil prices and strong consumer spending. For now, however, investors are banking on the U.S. economy gearing down a notch or two.

So why, exactly, might the economy be cooling? Start with the so-called fiscal stimulus that's been plumping growth this year. The Republican-led tax cuts that President Trump enacted in late 2016 were, depending on your perspective, either a shameless giveaway to the rich or a long overdue inducement for consumers and businesses to spend, spend, spend. More certain is that a little spare cash in your pocket or on corporate balance sheets typically does boost economic activity.

Until it doesn't. Forecasters say the positive effects of the stimulus delivered by Washington are already fading (while also driving the federal debt ever higher, for anyone keeping score). Other headwinds: rising U.S. interest rates, an ongoing economic slowdown in China and, well, let's break out the third reason since it could be a doozy.

If you believe the Trump administration, the U.S. and China will have settled their incipient trade war by the time spring rolls around and have re-opened their respective economies for business. But plenty of experts think that's wishful thinking. After all, the battle here isn't only about leveling the commercial playing field; rather, it's about a fundamental contest between the world's two preeminent powers.

Given that clash, investors harbor real doubts that the countries can put their trade differences aside. Not helping this week was Mr. Trump anointing himself "Tariff Man," contributing to a nearly 800-point drop in the Dow on Tuesday, followed by another 500-point slide after news of the arrest of a top executive from Chinese telecom giant Huawei at the request of U.S. authorities.

So what's it all about?

More bullish investors will focus on the positives. That includes the lowest unemployment rate since 1969, which is benefiting even the most economically vulnerable Americans — people without a high school degree. Optimists might also point to signals from the Federal Reserve that it may raise interest rates more slowly than previously thought.

"[O]n balance we're still a little surprised to see such a growing panic in markets develop quite so soon given the relatively benign economic backdrop," Paul Ashworth of Capital Economics said in a note to clients Friday.

But as this week's market slide shows, most investors are pulling in their horns. They see a nearly 10-year U.S. economic recovery that is showing its age. They see the global economy losing momentum. And they see a truculent and unpredictable White House that, despite this week's overtures to China on trade, looks ready to slug it out. 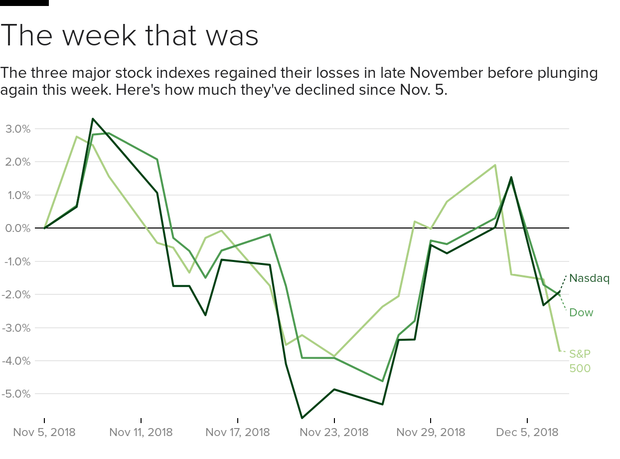