Fans of "The Daily Show" got to see Trevlor Noah host Tuesday night's Comedy Central broadcast. But they didn't get to hear him.

The reason: Noah has lost his voice and is under doctor's orders not to utter a word.

The show began as usual, with the theme song playing and the audience cheering as the South African-born comedian walked onto the set and sat at his desk. But when the camera pointed at the desk, the TV audience saw comedian Mike Acosta already there.

Speaking for Noah, Acosta told the audience that, indeed, the show "was a little different" in that Noah was ordered not to speak – or risk needing surgery. He didn't elaborate on what caused the vocal problem or how long Noah will be unable to speak.

Acosta explained that Noah lost his voice after his visit to South Africa this past weekend to take part in events to mark the centennial birth of former president and anti-apartheid leader Nelson Mandela. Clips from the visit were featured on Monday's show.

Speaking as Noah, Acosta said, "Over the weekend, I lost my voice and my doctor told me not to speak at all or I might get surgery, so I cannot say a word. Luckily, I have Mike Acosta to be my voice for today." Acosta went on to read the monologue as Noah made hand and facial gestures to go along with the setups and punch lines.

Using Noah's words, Acosta joked that while his voice "might not be as soothing," he would be able to "say everything just the way I was going to say it, including the 'N-word.' Just joking; he'll be fired before the word leaves his lips."

When the subject did turn to racial issues, Acosta backed off, pretending to receive an urgent phone call. Another "Daily Show" comedian, Roy Wood Jr. stepped in to do those jokes. 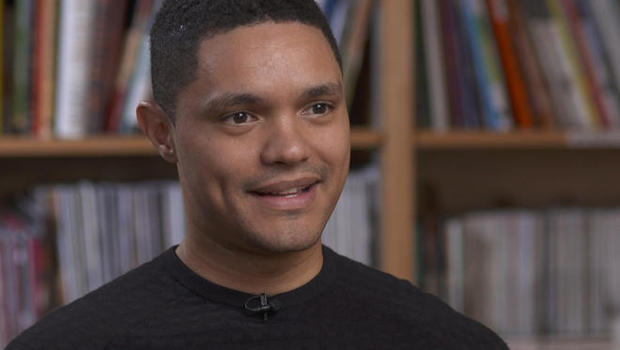 “Fiddler on the Roof” in Yiddish brings new life to classic...