If you've heard lately that the "yield curve" is inverting, your response might range from curiosity about what that portends for the U.S. economy to, perhaps more likely, the kind of drowsiness brought on by arcane financial jargon. For investors, though, it's a big deal for one simple reason: An inverted yield curve is often the dark cloud that precedes the storm.

Here's what you should know about this unusual market phenomenon and what it's signaling about the economy.

What is a yield curve?

A bond yield is the return an investor gets on a government or corporate bond.

The yield curve shows the returns on bonds of different maturities, from a few months on the so-called short end to as long as 100 years on some corporate bonds. The longest-duration Treasury bond (meaning fixed-interest debt backed by the U.S. government) is 30 years.

Longer-term bonds offer investors a higher yield (or return) than shorter ones, reflecting the risk of tying up their money for years or decades.

Why is it important?

Simply, the yield curve tends to invert before economic downturns. Economist Will Denyer of Gavekal Research notes that the yield curve has flattened, and eventually inverted, before every U.S. recession since the mid-1950s (see chart below).

The last time that happened before this week? Try 2007 — shortly before the housing crash put the economy in a hole Americans are still climbing out of. No surprise, then, that one investor calls an inverted yield curve a "harbinger of doom."

That's overstating the risk, but it does indicate that investors are pessimistic about longer term economic growth and prefer to keep their money in short-term investments.

Here's what that does: Yields on short-term bonds rise above those of longer-term bonds, historically a signal that an economic slowdown is around the corner.

President Donald Trump has been railing against the Fed's ongoing policy of gradually raising interest rates, complaining that it's slowing U.S. economic growth. For its part, the central banks says that pushing up rates is necessary to keep the economy from overheating. In its view, those rate hikes are putting the brakes on borrowing and hiring, keeping inflation under control.

Rate cuts do the opposite, injecting fuel into the economy by encouraging companies and investors to borrow at cheap prices. And when is that fuel needed? During an economic downturn, which is one reason why the yield curve inversion is spooking the market.

When did the yield curve invert?

The yields on five-year Treasury notes fell below those on three-year notes on Monday — that hasn't occurred since 2007. And that's why investors are paying attention to this latest hiccup in bond yields.

Is it happening to all bonds?

No — and that's why this latest flip in yields may not augur recession. An inversion between 3-month Treasury bills and 10-year Treasury notes is viewed as a "more appropriate indicator" of a recession. But that hasn't happened yet, noted Charlie Ripley, senior investment strategist for Allianz Investment Management.

"It could be many months before we see that point of the curve invert," he said in a research note to clients.

So should I brace for a recession?

Not yet. The yield curve inversion reflects what investors believe at the moment, and historical patterns don't guarantee that an event will occur in the future.

Yield-curve inversions typically occur months — or even years — before a recession. But most economists say the chances of a near-term recession are slim, pointing to strong hiring and consumer spending, among other positive trends.

"Current rates of consumption, investment and employment growth in the major developed markets are not historically consistent with an impending recession," UBS analysts wrote in a research note this week.

It added, "We would caution against reading too much into the inversion." 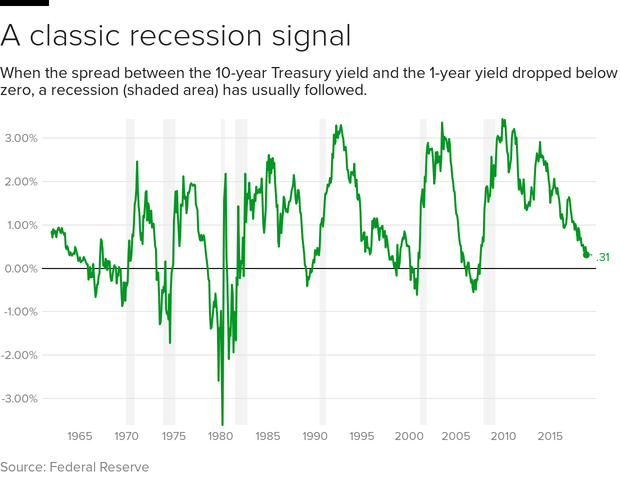 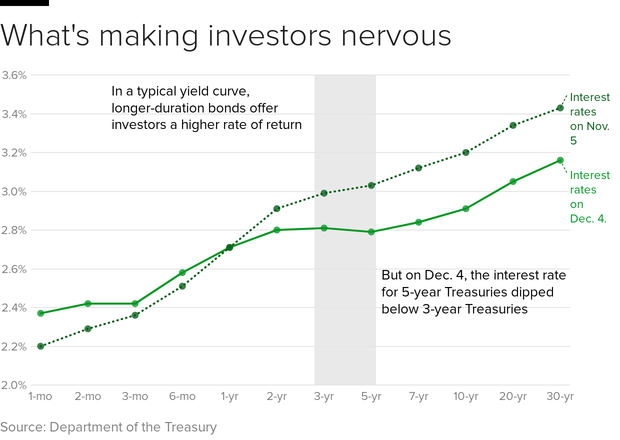 Historic numbers of women of color are nominees for the House...

Dad: Hacker spoke to baby, taunted me, turned up thermostat