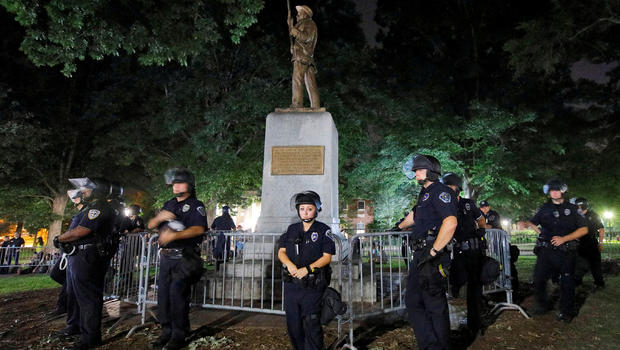 Students at the University of North Carolina at Chapel Hill are protesting the school's plan to relocate a toppled Confederate monument to a new $5 million campus building. Protesters believe the move would create a safe space for white supremacy. University officials said they don't have a choice but to keep it on campus.

The Silent Sam monument honors North Carolina's Confederate soldiers who died in the Civil War. It was pulled down by protesters in August after more than 100 years on campus.

Several hundred students marched through the UNC Chapel Hill campus Monday night, some scuffling with police, while protesting the school's decision to relocate Silent Sam. Since 2015, across the country, more than 100 monuments and Confederate symbols have been removed, but a recent report found there are still more than 700 Confederate monuments in the U.S. – nearly 100 in North Carolina.

"I have a preference to move it off campus, but, like everyone here, I swore to obey the law," said UNC Chancellor Carol Folt.

Chapel Hill administrators said as a public state university it had no choice but to keep Silent Sam on campus. A 2015 law passed in North Carolina prohibits state agencies from permanently removing or relocating state-owned memorials or statues.

"That law is a convenience for them, something to hide behind and say, 'well, we can't do anything,'" said UNC student Tamia Sanders.

In a proposal released Monday, Chapel Hill administrators said they plan to build a university history and education center on campus to house the statue and other historical artifacts. The building will cost more than $5 million with the expectation to open in 2022.

Bill Keyes, who serves on the UNC board of trustees, said he supports the university's plan, but can't ignore the history behind the monument.

"This monument is a reminder that black people were owned by white people as property, and that the institution of slavery was enforced by unconscionable brutality," Keyes said.

The UNC Board of Governors is expected to meet next week to review the proposal. 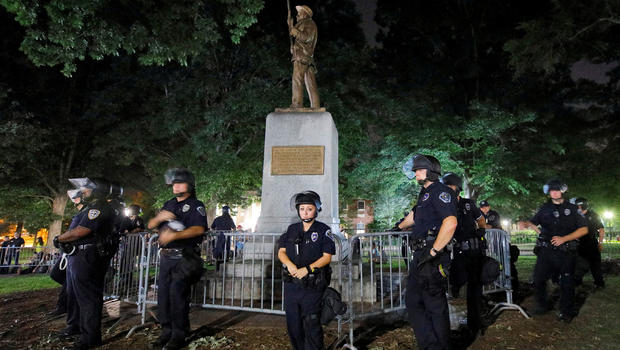 Tracking the snowstorm as it moves across the U.S.

CDC updates guidance on best masks to protect against COVID-19