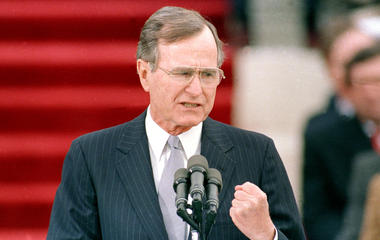 Donald Trump's takeover of the GOP seemed to come into even clearer view this week with the passing of another Republican president, George H.W. Bush. But while the contrasts between the two men are stark — America as a kinder, gentler nation versus America first — it can be argued the foundation for the 45th president was laid during the administration of the 41st.

Mr. Bush's budget deal with Democrats in 1990, which forced him to abandon his famous "no new taxes" pledge, opened a rift in the Republican Party that alienated conservatives, lent oxygen to his intraparty opponents like Pat Buchanan, and fueled the rebellious Newt Gingrich. After Bush lost his re-election campaign in 1992 and the GOP took control of Congress in 1994, the party aligned more with Gingrich's combative instincts than with Bush's propensity for politeness. And at the same time, partisan outside media was growing more influential.

"Without Gingrich, there's not the Republican revolution in 1994, which is the benchmark for the GOP becoming a lot more conservative populist, and the pulling away from the Bush coalition," says Bill Whalen, a Hoover Institution fellow who served as a speech writer for the Bush-Quayle re-election campaign in 1992. The events coincided with, and provided fodder for, the rise of talk radio and the proliferation of other media, and politics since has "become a lot more crass and ugly," Whalen says.

"It sort of began the process of more grassroots Republicans not automatically following the lead of the leaders…That tendency has only grown since then," says former Republican Rep. Vin Weber, a key ally of Gingrich in those years.

"It was an extremely painful period and issue," Weber recalls of the budget battle with President Bush. "The president was convinced that was good for the country and the economy, and a lot of us, particularly in the House, viewed it through a much more political lens than he did."

What differentiated Bush from his successors, Weber says, was that "he was, of course, a loyal Republican, but he really believed in governing the country….That feeling has been lost to a substantial extent. The sense of us versus them has taken over."

The former president's passing comes just weeks after Republicans lost 40 seats in the House in a midterm election largely seen as a rebuke of President Trump's rhetoric and behavior by suburban voters who tended to be more in line with the Bush style of politics. The election signaled a demographic and geographic re-alignment of the GOP under Trump.

Trump staked his 2016 campaign against the Republican establishment represented by the Bush family, taking particular aim at the former president's sons: Jeb Bush, his GOP primary rival, and George W. Bush, the 43rd president. The elder Bush may not have been surprised by the appeal within his party for Mr. Trump's style of politics — Gingrich, after all, emerged as a top ally of Mr. Trump's. (Mr. Bush had also leaned into divisive issues, too, while running for president in 1988 against the Democratic nominee, Massachusetts Gov. Michael Dukakis, as his own allies ran the infamously racist Willie Horton ad against Dukakis). But Bush was candid about his disapproval of then-candidate Trump.

"I don't like him," Mr. Bush told author Mark Updegrove in 2016 for his book on the father-son presidents called, "The Last Republicans." "I don't know much about him, but I know he's a blowhard. And I'm not too excited about him being a leader." Mr. Trump, he said, was driven by "a certain ego."

The late president also told Updegrove that he voted for Hillary Clinton, the wife of the man who defeated him in 1992. But in a sign of the way in which the party has morphed into one belonging to Mr. Trump, Mr. Bush's grandson George P. Bush, endorsed Trump, even after he had denigrated his father, Jeb Bush, as "low-energy." George P. Bush touted the endorsement in an ad he ran while campaigning for Texas land commissioner earlier this year, and the president returned the favor.

But this week, as Bush's life has garnered bipartisan praise and remembrances, Trump has shown uncharacteristic deference to the Bush family. He deployed Air Force One to bring Bush's coffin from Houston to Washington and announced the government would close Wednesday in honor of Bush's funeral. The arrangements stand in stark contrast to the arrangements for the funeral of Sen. John McCain, who did not want the current president to attend his funeral and planned a program seen as a rebuke of Trump and his style of politics.

That Bush kept with protocol in inviting the current president to the funeral shows the former president's propensity "not to air grievances," says Whalen. In that way, the celebrations of life this week will likely put the differences between the two men on further display.

"It may be that George H.W. Bush did one final service to the GOP by making sure Trump and his wife were invited to the funeral," says Weber. "It's so typical of who he is: whatever slights he may have felt, he was going to do the right thing at the end." 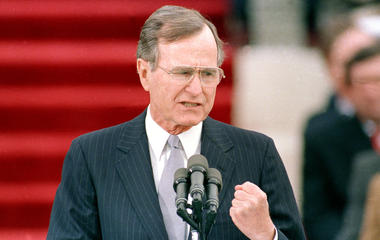 Inflation is driving up car prices. Tips for buying in 2022.

The shutdown is over, but immigration courts are “chaos”

Willie O'Ree, first Black player in the NHL, to be honored