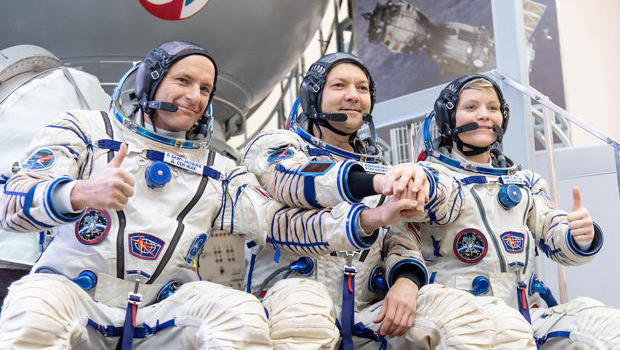 Less than two months after a dramatic launch abort, the Russian space agency is readying another Soyuz FG booster and crew ferry ship for launch from the Baikonur Cosmodrome in Kazakhstan Monday to carry a veteran cosmonaut, a Canadian flight engineer and a NASA astronaut to the International Space Station.

Liftoff from the same pad used by Yuri Gagarin at the dawn of the Space Age is targeted for 6:31:53 a.m. EST (GMT-5; 5:31 p.m. local time) when Earth's rotation carries the rocket into the plane of the space station's orbit — a requirement for rendezvous missions.

If all goes well, Soyuz MS-11/57S commander Oleg Kononenko, rookie flight engineer David Saint-Jacques and Anne McClain, an Army colonel and helicopter pilot making her first flight as a NASA astronaut, will catch up with the space station six hours after liftoff, moving in for a docking at the upper Poisk module around 12:36 p.m.

Standing by to welcome them aboard will be Expedition 57 commander Alexander Gerst, a European Space Agency astronaut, NASA astronaut Serena Auñón-Chancellor and cosmonaut Sergey Prokopyev. They've had the station to themselves since three other crewmates returned to Earth Oct. 4.

They originally expected to be joined Oct. 11 by Soyuz MS-10/56S commander Alexey Ovchinin and Nick Hague, but a malfunction two minutes after liftoff caused one of the Soyuz FG rocket's four strap-on boosters to crash into the central second stage, throwing the vehicle out of control.

The Soyuz crew ship's flight computer instantly detected the problem and activated the vehicle's abort system, which quickly pulled the crew capsule away from the rocket. Ovchinin and Hague landed safely about 250 miles downrange. Senior managers with NASA and the Russian space agency Roscosmos said Ovchinin and Hague will be reassigned to another flight soon.

In the meantime, Russian engineers quickly identified the cause of the abort: a bent component in the booster separation system that apparently was caused by a mistake during the rocket's assembly. A fleet-wide inspection was carried out and several Soyuz boosters were successfully launched before Kononenko's crew was cleared for flight.

McClain, a veteran military helicopter pilot, said she had no concerns strapping into her Soyuz. In fact, she said in an interview, she would have been happy to strap in the day after the abort.

"The Soyuz rocket has an amazing track record," she told CBS News. "A launch has not been aborted since 1983, and that was a pad abort where the whole rocket kind of erupted in flames. And the crew successfully landed and went off to fly again.

"Going to space is not easy. The crew in October was lucky. But so is every crew that has flown in space over the last 50 years, 60 years. You know, I'm very familiar with the rocket and with the redundancy of their systems and with their safety systems. And I'll be frank with you, I would have gotten on a rocket the day after that happened."

The launch abort threw a wrench into the carefully planned space station resupply and crew rotation schedule. Gerst, Prokopyev and Auñón-Chancellor originally planned to return to Earth on Dec. 13, leaving the station in the hands of Ovchinin and Hague until Kononenko's crew arrived on Dec. 20.

In the wake of the launch mishap, Roscosmos moved up the Soyuz MS-11/57S launch to Dec. 3 and delayed the departure of Gerst's crew until Dec. 20, giving the two crews nearly three weeks to deal with the arrival of a SpaceX Dragon cargo ship and a spacewalk by Prokopyev and Kononenko on Dec. 11.

Depending on when the Dragon arrives — it's currently scheduled for launch Tuesday and berthing at the station Thursday — NASA may consider staging one and possibly two spacewalks to install a second set of replacement batteries in the space station's solar power system. Those spacewalks were put on hold in the wake of the launch abort.

The primary goal of the Russian spacewalk Dec. 11 is to inspect the Soyuz MS-09/55S ferry ship that will carry Gerst, Prokopyev and Auñón-Chancellor back to Earth on Dec. 20.

In late August, sensors detected a pressure drop in the space station's atmosphere that was traced to the upper habitation module of the Soyuz MS-09 vehicle. An inspection revealed what looked like a small hole drilled into an interior panel and while it appeared to be the result of a deliberate action, presumably before launch, the Russians have not yet revealed any conclusions.

In any case, Prokopyev sealed the hole with cloth soaked in epoxy and the leak stopped. Russian engineers ordered the spacewalk to inspect the exterior of the Soyuz to look for any signs of damage that might be related to the hole found inside the spacecraft.

Auñón-Chancellor said she had no concerns about coming home aboard the Soyuz.

"They're going to be inspecting just the integrity of our vehicle, make sure that everything looks OK," she told CBS News in a Nov. 29 interview. "Of course, everything on the ISS can get pummeled by what we call micrometeoroid debris all the time, and so they're just checking the integrity of that vehicle.

As it now stands, McClain and her crewmates can expect to be alone for two months or more. With a wealth of experience in a variety of disciplines, that should be no problem, even though two of the crew members are space rookies.

Kononenko has three previous space station flights to his credit and is one of the world's most experienced cosmonauts with 533 days in orbit under his belt. Despite all that time off the planet, he doesn't believe humanity is a truly spacefaring civilization. At least not yet.

"I hope my trip to Earth orbit does something to help us accomplish this goal," he said. "I would really like to see humankind reach into the far reaches of space, and I hope that all the experiences, all we do here, will push humankind forward to far away planets and the depths of space."

Saint-Jacques and McClain are both making their first flight.

Saint-Jacques speaks French, English, basic Russian, Spanish and Japanese. He has a bachelor's degree in engineering, a Ph.D. in astrophysics from Cambridge University and an M.D. from Université Laval in Quebec City. He also holds a commercial pilot's license with multi-engine and instrument ratings and an advanced scuba-diving license. His hobbies are mountaineering, cycling, skiing and sailing.

"The one thing that defined me as a child was curiosity," he said before launch. "I'm one of those people who just can't stand it when I don't understand something, I've just got to get to the bottom of it. That led to me really liking school, and trying to stay there as long as I could."

He started with engineering "because I was interested in how things worked and moved on to astrophysics "to learn more about how the universe works, how nature works." From there, he moved to medicine to "know how people work."

A senior Army aviator, McClain has more than 2,000 hours flying time in 20 different aircraft and is certified in the OH-58D Kiowa Warrior helicopter as an instructor pilot. She logged more than 800 hours during 216 combat missions as pilot-in-command and Air Mission Commander during Operation Iraqi Freedom.

She was selected as a NASA astronaut in 2013 and brings a deep appreciation of teamwork to her crew.

"Growing up in Spokane, all the way through college and throughout my adult life, I've played team sports, I've played everything under the sun, I've tried it all, and when I finally found rugby I found something I was good at because it didn't require much coordination," she laughed. "At least not the positions I've played.

"But I've found team sports really developed the idea of working hard for the benefit of the team, especially when I played on the national rugby team. We were spread all the way around the country but we had a goal to do well in our international competitions and the only way that we could be successful was to trust that each of us were going to prepare when we weren't looking."

She said that reflected, in a similar fashion, the experience of astronauts training for space flight.

"Much like our crews, when we fly to space we've all been training separately, we grew up on different sides of the planet and now we come together and immediately rely on one another for successes," she said.

"The other thing that rugby really taught me was how to push past the limits that you think were limits. You really learn what you're capable of in the 60th minute of a rugby match."

"It's actually trash management," Auñón-Chancellor said. "We live with our trash up here, it's not as easy as it is at home where once that stinky bag of garbage in the kitchen is done you just take it right out to the curb and someone else takes care of it for you.

"Up here, we really have to be really careful about separating what we call wet trash, like food items, from dry trash or even hardware trash and then trying to get all that trash off of station and into one of our visiting vehicles … It's really eye opening." 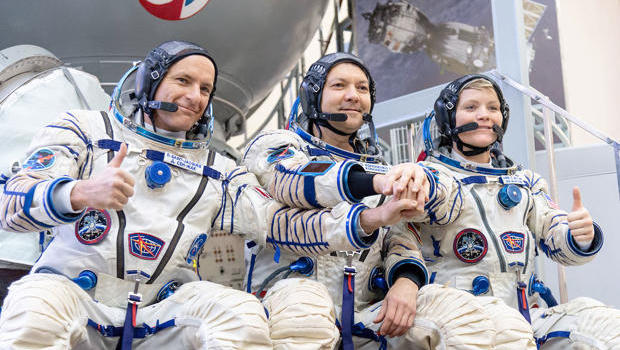 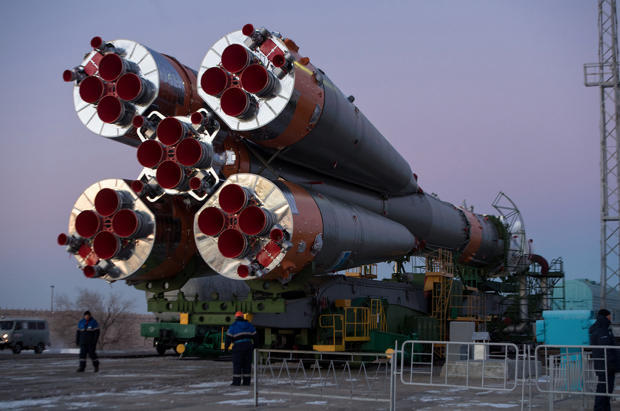 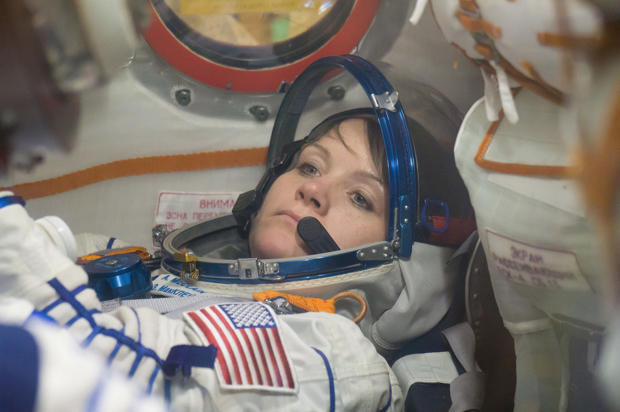 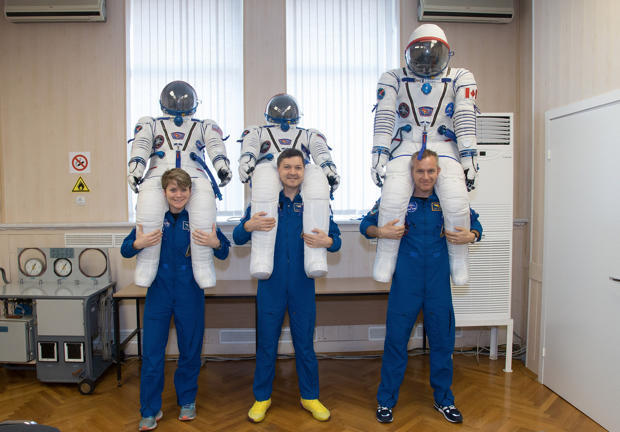 Marshawn Lynch arrested on suspicion of DUI in Las Vegas