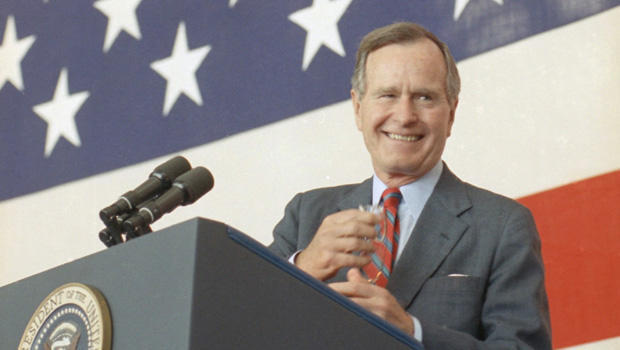 "I see history as a book with many pages, and each day we fill a page with acts of hopefulness and meaning," said President George Herbert Walker Bush in his Inaugural Address, January 20, 1989.

The pages of President Bush's life are a testament to his belief in the purpose and potential of the country he loved.

At 94, he lived longer than any President in American history, spending most of his life in public service.

"He understood the importance of trying to put something back into the system at whatever sacrifice that required," said James Baker, one of Bush's closest friends who also served as his Secretary of State.

Baker was there during the tensest moments of the Bush administration, including Operation Desert Storm, the 1991 U.S.-led mission that ousted Saddam Hussein's Iraqi forces after their invasion of Kuwait.

"The terrible crimes and tortures committed by Saddam's henchmen against the innocent people of Kuwait are an affront to mankind and a challenge to the freedom of all," Mr. Bush said in an address to the nation in January 1991.

Baker said sending U.S. troops to war was not a decision the president made lightly. "He said, 'You know, nothing is more difficult than sending someone else's son or daughter off to perhaps die in a foreign land," he said.

Mr. Bush understood that firsthand. At 19, already the youngest Navy bomber pilot in World War II, his plane was hit on a mission in the South Pacific.

"The plane went surging forward," he recalled. "I felt this jolt, I could see the fire all around, anti-aircraft, and then suddenly my plane was on fire."

He managed to finish his mission, releasing four bombs, then bailed out, and was rescued by an American sub. "So, I'm floating around in this raft, paddling, and then saw this conning tower come up and saw this submarine surface, the guy standing up in the top taking a picture. We still have a picture of it!"

George H.W. Bush was born into a prominent New England family. His father, Prescott, was a U.S. Senator from Connecticut. His mother, Dorothy, taught him to be humble. "She said, 'You will be modest. You don't brag about yourself,'" said historian David McCullough. He said another woman may have been Bush's most important influence: Barbara Pierce Bush.

They fell in love while still in high school, and married as soon as he returned from the war. They spent 73 years together, until her death this past April.

McCullough said, "She could see through the mystic, colorful stagecraft of politics, and who was on the level and who wasn't."

Mr. Bush got his degree from Yale, where he was captain of the baseball team, and after graduation in 1948 moved his growing family to Texas. The Bushes would have six children in all, but friends say they never got over the loss of their three-year-old daughter, Robin, to leukemia, in 1953. "It had a profound effect on me and Barbara, and I think that horrible incident drew us even closer together," he said.

In Texas, he founded an oil company, but politics beckoned.

Correspondent Rita Braver asked Baker, "Why do you think he was so drawn to public service?"

"He used to say, 'My family inculcated in me a strong sense of public service,'" Baker said. "And I used to say, 'George, you can't say inculcated, it sounds like a medical procedure or something. Say something else!' But that was his philosophy."

He may have had the best pre-presidential resume of any president in history: U.S. Congressman, United Nations Ambassador, director of the Central Intelligence Agency, Chairman of the Republican National Committee, and Envoy to China.

Mr. Bush took on the job of CIA chief in the Gerald Ford Administration, after Congressional hearings revealed massive dirty tricks and illegalities, including charges of spying on U.S. citizens. In 1976, in an interview with Mike Wallace, Mr. Bush promised to clean things up:

"I think there will be safeguards that certainly the agency can enthusiastically support, and I know will meet with the satisfaction, with the support of the American people," he said.

But he lost out to Ronald Reagan, and took the number two spot on the winning ticket against incumbents Jimmy Carter and Walter Mondale.

McCullough said, "I think that Bush's service for eight years as vice president was admirable in his loyalty to the president. He never tried to upstage the president, never openly expressed a disappointment or a disagreement with the president."

And President Reagan, according to Bill Plante, really appreciated that. Plante, who covered the White House on and off for CBS News for more than 35 years, says Mr. Bush had one job that's traditional for Vice Presidents: "He went to all the funerals of foreign leaders. He used to say in his office, 'You die, we fly.'"

George H.W. Bush finally clinched the Republican presidential nomination in 1988, telling the convention, "I want a kinder and gentler nation."

He and his running mate, Indiana Senator Dan Quayle, would go on to win the election against Massachusetts Governor Michael Dukakis and Texas Senator Lloyd Bentsen. He was the first president in 150 years elected directly after serving as vice president.

In his Inaugural Address he said, "We live in a peaceful prosperous time, but we can make it better. For a new breeze is blowing, and a world refreshed by freedom seems reborn."

It was a time of big international changes. At the end of 1989, President Bush sent troops to Panama to topple strongman Manuel Noriega, announcing, "The day of the dictator is over."

But there was an even more significant foreign development in that same period: the fall of the Berlin Wall, as Communism started to lose its hold in Eastern Europe. President Bush was surprisingly laid-back in his response. In the Oval Office he was asked by a reporter, "You don't seem elated, and I'm wondering if you're thinking …"

"Well, how elated are you?"

Plante said, ""George H.W. Bush was never the kind of man who would spike the ball in the end zone. He would never do the victory dance."

And James Baker said that low-key diplomatic approach helped engineer a peaceful end to the Cold War, as the Soviet Union collapsed. "He said, 'Wait a minute, we still have business to do with these people, and it would be counterproductive to our interests if we stuck it in their eye,'" said Baker.

President Bush had domestic success as well, with the signing of a law that gave new protections to Americans with disabilities. But he also faced complaints that he was "out of touch."

Was the reputation deserved? Plante said, "I don't think he felt he was above it all. But I do believe that he seemed to have manners which, in much of the country, were seen as aristocratic, if you will."

In 1992, President Bush lost his bid-for re-election to Arkansas Governor Bill Clinton, in a three-way race with businessman Ross Perot. It may have been, at least in part, the result of Mr. Bush breaking a promise he had made four years earlier: "Read my lips: No new taxes."

Braver asked Baker, "Why did he change his mind once he became president?"

"He said, 'I did it because it was the right thing to do.' He made a bargain with the Democratic leadership that he would raise taxes if they would cut spending. The taxes got raised, but the spending cuts never came."

And so George H.W. Bush bowed out of center stage. In his concession speech he said, "We have fought the good fight, and we've kept the faith, and I believe I have upheld the honor of the presidency of the United States."

Mr. Bush would go on to see two of his sons, George and Jeb, become Governors, Then, in 2000, George W. Bush became President of the United States, only the second time in history that a father and son would hold the highest office in the land.

Baker said, "I can't tell you that they agreed on everything. But I'll tell you this: he never intruded on 43's decision-making."

"The word is that he didn't take to it kindly when his son was criticized as president," Braver said.

George H.W. Bush will be remembered for joining with fellow former President Bill Clinton to raise millions for victims of national disasters; and for founding the Thousand Points of Light Foundation to promote volunteer service.

"Why in the world would you wanna do that?" asked McCullough. "Something in him. And the fact that she would let him do it!"

But perhaps most of all, George Herbert Walker Bush will be remembered for his sense of honor, decency and fair play.

As Baker said, "Really, a beautiful man. And of course I'm affected, because he played such a big role in my life. So it's hard for me to talk about. Some will say, 'Well, he was too soft to be president. He wasn't tough enough …' He was plenty tough. But he was thoughtful, and he was kind and he was considerate. He was lovely." 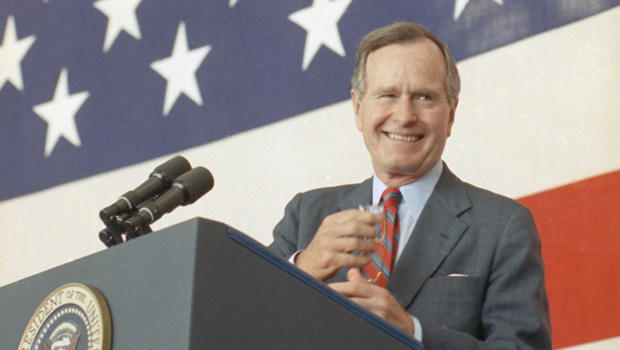