WASHINGTON — In a warm-up to upcoming Democratic investigations once the party takes control of the House next year, Democrats blasted the Trump administration's response to Hurricane Maria in Puerto Rico Thursday, while the head of the Federal Emergency Management Agency (FEMA) accepted blame for critiques of the government's response to the disaster.

"Place blame on me all you want, that's fine, I can take it. But that's not going to be the answer for solving the problems of the future," FEMA Administrator Brock Long said in his opening statement before the House Oversight Committee.

Long said the administration's "formula for success … was not present going into Puerto Rico." He said he was appearing before the committee "in the spirit of improvement." President Trump earlier this year called the government's response to the hurricane an "incredible, unsung success."

"I'm not here to beat up on you. I'm just trying to figure out what happened so we can correct it," Cummings told Long.

Democratic Rep. Nydia Velazquez of New York, herself a native of Puerto Rico, seemed to concentrate all of her frustrations with the hurricane's response into her questioning of Long.

"When I hear you trying to blame the local government, I get angry," Velazquez said, staring sternly at Long. "I get angry because of your lack of understanding of the political reality of Puerto Rico and the United States."

"Ma'am, I don't blame anybody in a disaster. Everyone blames FEMA and as I said that is fine," Long replied.

"People have got to man up, woman up, and take responsibility for their shortcomings," Plaskett said.

Democratic Rep. Luis Gutierrez of Illinois noted blue tarps still cover some Puerto Ricans' homes and mocked Mr. Trump for his recent comments rejecting the results of a federal report on the effects of climate change.

Thursday's hearing was sparsely attended, particularly since Democrats were holding elections for various party leadership posts at the same time. The hearing had previously been scheduled for September but was moved back as Hurricane Florence barrelled toward the East Coast.

The death count in Puerto Rico from the hurricane was debated throughout the hearing. A study from the George Washington University in August found the total loss of life to be nearly 3,000 people. Mr. Trump disputed that figure at the time and blamed Democrats for pushing the statistic to "make [Trump] look as bad as possible," he tweeted.

Cummings questioned Long about the presence of "mass graves" in Puerto Rico, and directly asked the administrator how many people died from the hurricane.

"I don't know how many people died in Puerto Rico but one death is a death too many," Long replied as he sat near the head of the university's research arm who conducted the study.

Ultimately, Long said FEMA relies on the local medical examiner's death toll, and said that number was around 65 deaths.

One of the Republicans present, Rep. Glenn Grothman from Wisconsin, defended Long and the Trump administration against his Democratic colleagues.

"Sometimes people make inflammatory statements and we have to straighten things out for people back home," Grothman said.

Long repeatedly praised the hard work of thousands of FEMA employees and said they are "working everyday" to ensure FEMA is prepared for a disaster.

"My staff has been busting their rear ends to help others," Long said. Several of the Democrats likewise applauded the hard work of the agency's employees.

Chairman Rep. Trey Gowdy from South Carolina concluded the hearing by commenting on what he perceived to be political motivations from Cummings, who will lead the powerful committee when Democrats take control in January.

Gowdy highlighted previous member briefings and thousands of pages of document requested from the administration. Gowdy added he "didn't hear a damn word" about the staff work completed in the past year.

The chairman also seemingly predicted today's high-strung hearing will be commonplace in the next Congress when Democrats gain subpoena power. 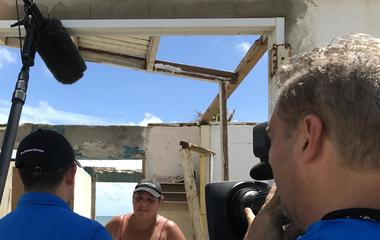