Americans are paying less to fill up their SUVs for a seventh week in a row as the price of gas slides toward yearly lows.

"Many states will see prices continue to decline," said Patrick DeHaan, senior petroleum analyst at GasBuddy, which helps drivers find cheap fuel. Gas prices generally track the price of oil, but lag one to three weeks, said DeHaan of the impact on consumers from fluctuations in crude.

Since hitting a four-year high near $77 a barrel at the beginning of last month, oil prices have plummeted about 30 percent, briefly sinking below $50 a barrel Thursday. The oil market has been in a slump amid rising stockpiles of U.S. crude and thoughts of slowing global growth and softer demand for the commodity.

The national average for a gallon of gas on Thursday came to $2.51, according to AAA. Drivers in Texas and Missouri were paying just above two bucks a gallon, and motorists paid more than $3.00 a gallon in fives states — California, Washington, Oregon, Nevada and Alaska, according to AAA.

The national average is likely to briefly dip into the $2.30s, but could range from $2.35 to $2.55 a gallon for the rest of the year, a scenario that could change with next week's OPEC gathering, DeHaan said.

It remains to be seen whether Russia and Saudi Arabia can reach agreement on a cut in production at the upcoming G20 summit, and then whether any consensus holds into an OPEC meeting next week. Lower gas prices could also help keep a lid on inflation and lessen pressure on the Federal Reserve to hike interest rates, something President Trump has loudly advocated against. No state is currently averaging gas prices below $2, but 21 states have at least one station with gas at $1.99 or less, according to DeHaan. He noted that the cheapest gas can be found at Buc-ee's in Denton, Texas, at $1.69 a gallon.

Consumers would be wise to shop around before filling their tanks. "As prices have fallen, some stations have passed along the drop quicker than others," DeHaan said. "Motorists could generally save 10 to 20-cents a gallon if they know where to fill their tank." 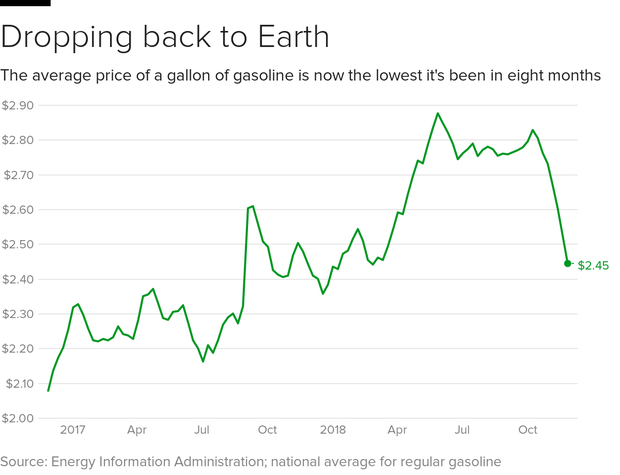