Nancy Pelosi secured the overwhelming support of her fellow House Democrats in her bid for speaker of the House, winning over key holdouts while looking ahead to a vote by the full House in January.

"We had the most unifying session," Pelosi said after the closed-door meeting of the House Democratic Caucus. "Our diversity is our strength, our unity is our power … Let us just take a moment to drill home the fact that we are in the majority. Majority, majority, majority. Our ranking members in a matter of weeks will be madam and mister chair."

Out of 239 votes cast, 203 Democratic members voted to nominate Pelosi as speaker, with 32 voting against. Three votes were blank and one member was absent.

While Pelosi won the support of a majority of her Democratic colleagues, the bar will be higher in January when a new Congress convenes. In the upcoming vote, she must win the support of at least 218 members, a majority of all House lawmakers. Democrats will control 234 seats in the House, meaning she can lose just 16 Democratic votes. At least 20 Democrats have signaled they intend to support someone other than Pelosi for speaker in January.

Pelosi predicted their opposition will not stymie her speakership. "Are there dissenters? Yes. But I expect to have a powerful vote as we go forward," she said today. She also said her party will look ahead to winning the White House in 2020. 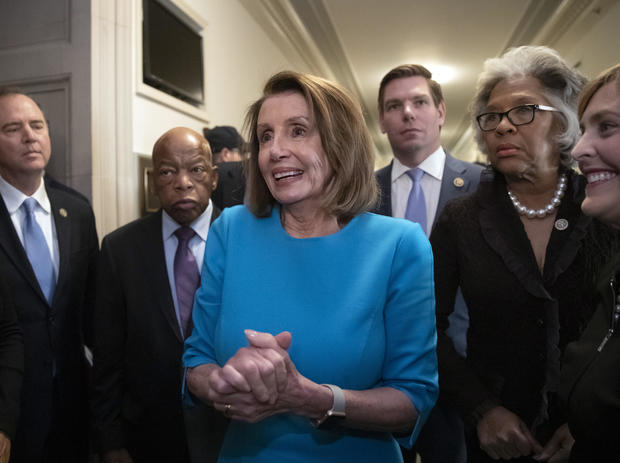