By Kate Gibson MoneyWatch November 29, 2018, 9:12 AM As Beyond Meat readies IPO, going mainstream is on the menu

Beyond Meat isn't big enough to take on the Smithfields and Tyson Foods of the world, but the maker of plant-based "meat" is readying to take on Wall Street.

In its filing for an initial public offering earlier this month, the maker of vegan chicken and beef substitutes makes clear it's looking to go mainstream, appealing to carnivores as well as vegans and vegetarians.

"It is not, and has never been, our goal to become the best-selling veggie burger or to market our products in a manner similar to traditional veggie burgers or soy-based meat," the company said in its filing with the U.S. Securities and Exchange Commission.

Beyond Meat, which launched in 2009, is best known for its Beyond Burger — made to "look, cook and taste like traditional ground beef," according to the company.

Backed by industry titans including Microsoft co-founder Bill Gates, Beyond Meat products can be found on shelves at such groceries as Whole Foods and Kroger, as well as on menus at TGI Friday.

The filing pegged the initial offering size at $100 million, but the figure is subject to change. Beyond Meat's application has it listing on the Nasdaq Global Market under the symbol BYND.

In April, White Castle introduced a plant-based burger at 140 locations in New York, New Jersey and Illinois. That burger is the result of an alliance with a startup called Impossible Foods.

Potential hurdles for Beyond Meat include rules involving use of the word "meat," it said in the filing. For instance, Missouri recently adopted legislation that bans "meat" as describing anything other than a product made from livestock.

A related scenario is already playing out at the U.S. Food and Drug Administration, which is considering banning the word "milk" from the labels of nondiary products like almond milk. 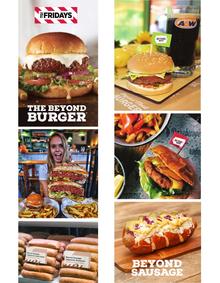 Eye Opener: Trump and Biden face off in civil but heated debate

Uber to ban riders who get rotten rating from drivers