Dystopian classic "The Handmaid's Tale" is getting a sequel, author Margaret Atwood announced Wednesday morning. The original novel, published in 1985, became the subject of renewed attention after President Donald Trump was elected in 2016 and a hit series based on the book debuted on Hulu in 2017.

The sequel to the book will be called "The Testaments." Atwood revealed on Twitter that fans' questions spurred her to write the follow-up to her iconic novel. "The Handmaid's Tale" takes place in a military dictatorship called Gilead where some women are forced to live as "handmaids" who must bear children for elite men who are married to barren women. The men are abusive, as are their wives. "The Handmaid's Tale" focuses on the story of Offred, a handmaid.

Atwood said, "Everything you've asked me about Gilead and its inner workings is the inspiration for this book. Well, almost everything!"

She continued, "The other inspiration is the world we've been living in." The book will be published next September.

In 2017, Elisabeth Moss, who plays Offred in the Hulu series, told "CBS This Morning," "It's an amazing thing that Margaret [Atwood] explored, how women can treat other women. When you alienate them and you … pit them against each other, how that can go so terribly wrong as opposed to uniting."

In July, co-star Joseph Fiennes told CBS News that he saw many parallels between "The Handmaid's Tale" and today's world.

"Our writers are clairvoyant," Fiennes said. "I think our writers, like Margaret Atwood and Bruce Miller, our showrunner, have really tapped into something extraordinary, creatively, and tapping into the energy and psyche of society the way they do has sort of brought about a parallel between our show and what's happening."

He continued, "But I think it's people who are cognizant about what's going on in society, the movement of that. We've certainly got lucky with certain political movements and the zeitgeist right now, without doubt but I think it's a testament to the show and what Atwood and the writers of the show are tapping into."

Fiennes talked about the women who dress as handmaids at political protests.

"It's vital," he said. "To have our show and that iconic look of the handmaids become a way of demonstration is kind of heartening for us. And I think on our show, it means we have a great responsibility to that movement and to those voices."

He also said that he hopes the show galvanizes men into action.

"I hope it's touched a nerve also with men. It really depicts what's going on, what has gone on … It's alerted me and sharpened my outlook and antennas to what's going on."

He added, "Don't go to sleep, because this might come back — the fundamentalism comes back in waves." 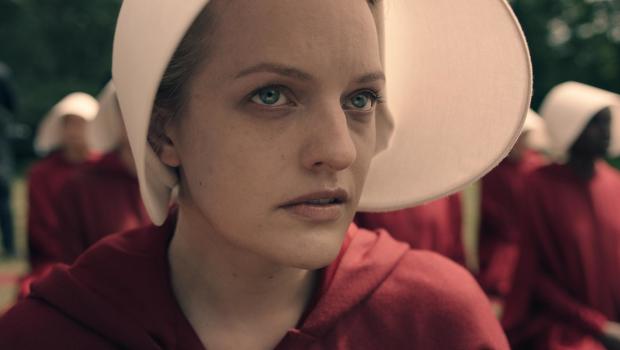