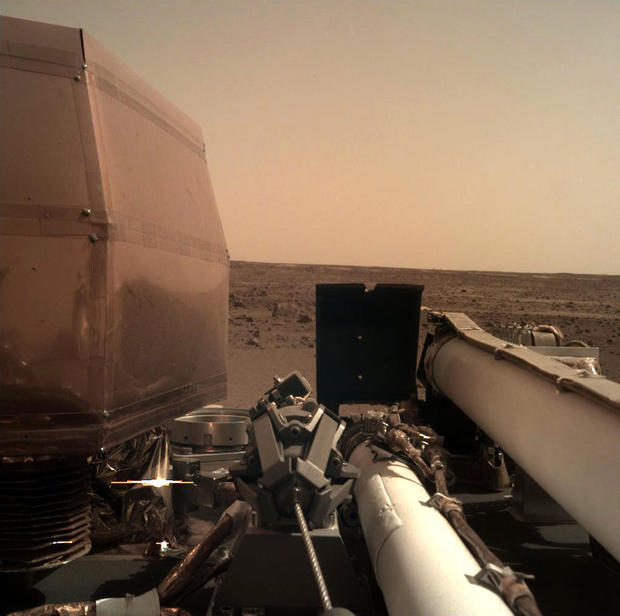 CAPE CANAVERAL, Fla. — Minutes after touching down on Mars, NASA's InSight spacecraft sent back a "nice and dirty" snapshot of its new digs. Yet the dust-speckled image looked like a work of art to scientists. The photo revealed a mostly smooth and sandy terrain around the spacecraft with only one sizable rock visible.

Another photo taken by its robotic arm-mounted camera after it landed on the planet shows a close-up of the spacecraft itself.

"I'm very, very happy that it looks like we have an incredibly safe and boring landing location," project manager Tom Hoffman said after Monday's touchdown. "That's exactly what we were going for."

A better image came hours later and more are expected in the days ahead, after the dust covers come off the lander's cameras.

The spacecraft arrived at Mars after a perilous, supersonic plunge through its red skies that took just six minutes.

"Touchdown confirmed!" a flight controller called out just before 3 p.m. EST, setting off jubilation among scientists at NASA's Jet Propulsion Laboratory in Pasadena, California, who had waited in white-knuckle suspense for word to reach across 100 million miles (160 million kilometers) of space.

The team had good reason to celebrate given the challenges the spacecraft had to overcome, CBS News' Bill Harwood reported.

InSight's protective heat shield endured temperatures up to 2,700 degrees Fahrenheit, the vehicle "felt" an atmospheric braking force of 7.5 times the force of gravity on Earth and still more as its 39-foot-wide supersonic parachute inflated with a force of 12,500 pounds per square foot.

It was NASA's eighth successful landing at Mars since the 1976 Viking probes, and the first in six years. NASA's Curiosity rover, which arrived in 2012, is still on the move on Mars.

Because of the distance between Earth and Mars, it took eight minutes for confirmation to arrive, relayed by a pair of tiny satellites that had been trailing InSight throughout the six-month, 300-million-mile (482-million-kilometer) journey.

InSight, a $1 billion international project, includes a German mechanical mole that will burrow down 16 feet (5 meters) to measure Mars' internal heat. The lander also has a French seismometer for measuring quakes, if they exist on our smaller, geologically calmer neighbor. Another experiment will calculate Mars' wobble to reveal the makeup of the planet's core.

Over the next few "sols" – or Martian days of 24 hours, 39½ minutes – flight controllers will assess the health of InSight's all-important robot arm and its science instruments. It will take months to set up and fine-tune the instruments, and lead scientist Bruce Banerdt said he doesn't expect to start getting a stream of solid data until late next spring.

Banerdt called InSight's first snapshot of the surface the first bit of science, albeit "nice and dirty." He said the image would be cleaned and the black specks would disappear. That photo came from a camera low on the lander. Late Monday, NASA released a clean photo taken by a higher camera that showed part of the lander and the landscape.

The 800-pound (360-kilogram) InSight is stationary and will operate from the same spot for the next two years, the duration of a Martian year.

"In the coming months and years even, history books will be rewritten about the interior of Mars," said JPL's director, Michael Watkins.

NASA went with its old, straightforward approach this time, using a parachute and braking engines to get InSight's speed from 12,300 mph (19,800 kph) when it pierced the Martian atmosphere, about 77 miles (114 kilometers) up, to 5 mph (8kph) at touchdown. The danger was that the spacecraft could burn up in the atmosphere or bounce off it.

Many Mars-bound spacecraft launched by the U.S., Russia and other countries have been lost or destroyed over the years, with a success rate of just 40 percent, not counting InSight.

The three-legged InSight settled on the western side of Elysium Planitia, the plain that NASA was aiming for.

Museums, planetariums and libraries across the U.S. held viewing parties to watch the events unfold at JPL. NASA TV coverage was also shown on the giant screen in New York's Times Square, where crowds huddled under umbrellas in the rain.

"What an amazing day for our country," said Jim Bridenstine, presiding over his first Mars landing as NASA's boss.

Mars' well-preserved interior provides a snapshot of what Earth may have looked like following its formation 4.5 billion years ago, according to Banerdt. While Earth is active seismically, Mars "decided to rest on its laurels" after it formed, he said.

By examining and mapping the interior of Mars, scientists hope to learn why the rocky planets in our solar system turned out so different and why Earth became a haven for life.

Still, there are no life detectors aboard InSight. NASA's next mission, the Mars 2020 rover, will prowl for rocks that might contain evidence of ancient life. The question of whether life ever existed in Mars' wet, watery past is what keeps driving NASA back to the fourth rock from the sun.

After InSight landed, the two experimental satellites zoomed past Mars, their main job done. One took one last photo of the red planet that the satellites' chief engineer, Andy Klesh, titled "farewell to InSight … farewell to Mars." 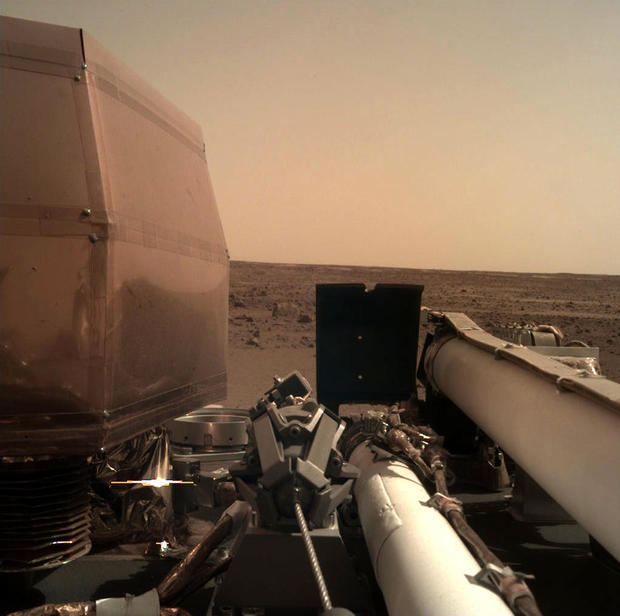 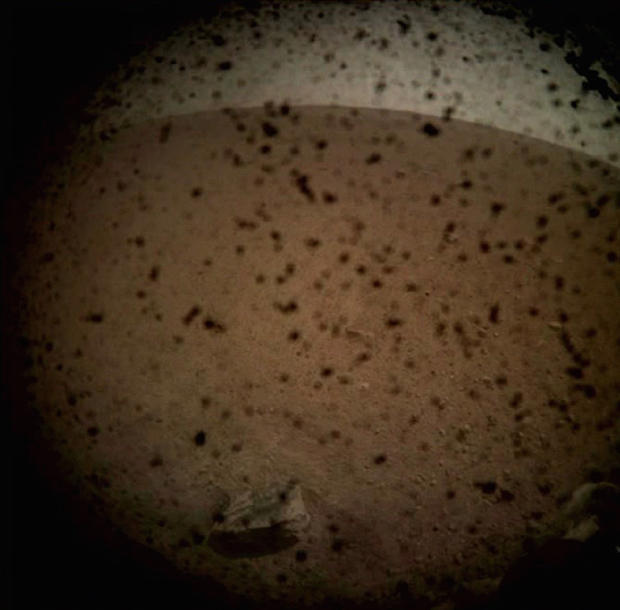 Trump to rally in Arizona as heated GOP Senate primary is...

Oath Keepers founder, 10 others charged for role in January 6