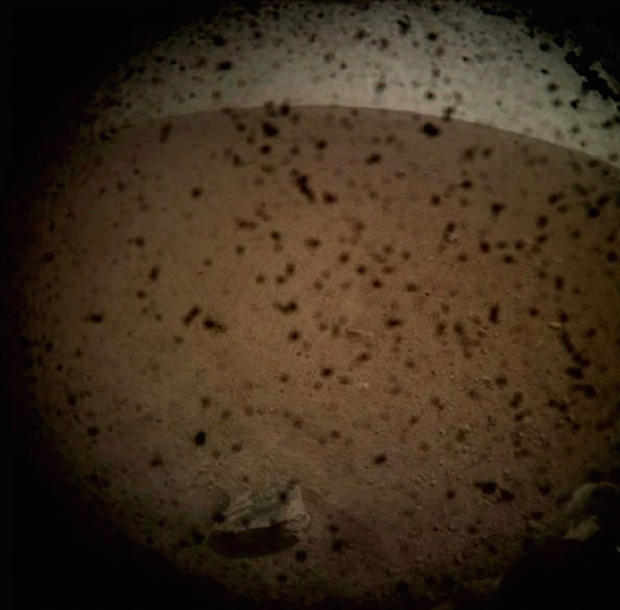 Slamming into the thin Martian atmosphere at more than 13,000 mph, NASA's InSight lander pulled off a blazing six-and-a-half minute 77-mile plunge to the surface of Mars Monday, using a huge parachute and then 12 pulsing rocket thrusters to settle to a gentle 5-mph touchdown in a billion-dollar mission to study the red planet's hidden interior.

When signals reached Earth confirming a successful touchdown, anxious flight controllers, engineers and scientists gathered at NASA's Jet Propulsion Laboratory in Pasadena, Calif., burst into welcome cheers, hugs and applause. They erupted again when an initial photograph was beamed down, showing the martian horizon through a lens cover speckled with dust kicked up during landing.

They had good reason to celebrate.

The spacecraft's protective heat shield endured temperatures up to 2,700 degrees Fahrenheit, the vehicle "felt" an atmospheric braking force of 7.5 times the force of gravity on Earth and still more as its 39-foot-wide supersonic parachute inflated with a force of 12,500 pounds per square foot.

After slowing to subsonic velocities, InSight fell free of its parachute and upper support structure for the final mile to the surface, using a dozen small rocket motors to reduce its descent rate to about 5 mph before settling to the surface atop three shock-absorbing landing legs.

InSight did not have the ability to send telemetry directly back to Earth during its plunge to the surface, but flight controllers at JPL were able to follow along thanks to a pair of small, experimental "CubeSats" known as MarCO A and B that were launched along with InSight last May as part of a technology demonstration project.

As the lander descended, a UHF radio sent telemetry up to the MarCOs, which then relayed it directly back to Earth. As a backup, the entry was timed to coincide with the passage of NASA's Mars Reconnaissance Orbiter overhead. The satellite was programmed to record the full suite of InSight telemetry for relay back to Earth about three hours after touchdown.

But thanks to the MarCOs, the flight control team already knew the lander had made it safely to the surface, albeit 8.1 minutes after the fact. That's how long it took for radio signals from Mars to cross the 90-million-mile gulf to Earth.

Then, about seven minutes after landing, InSight beamed a simple tone directly to Earth that confirmed a successful touchdown, triggering another round of cheers and applause.

InSight — the acronym stands for Interior Exploration using Seismic Investigations, Geodesy and Heat Transport — is the ninth lander sent to Mars by the United States since the twin Viking spacecraft touched down in 1975. One of the eight previous landers crashed to the surface in 1999, but InSight's descent marked NASA's fifth success in a row.

Overall, NASA has spent an estimated $22.7 billion sending 23 spacecraft to Mars since the initial — and unsuccessful — Mariner 3 flight in 1964. Only 24 of the 57 missions launched so far by any nation, including combination lander/orbiter flights, have been successful, but NASA's batting average tops the list with 17 successes in 23 attempts.

Unlike previous projects that primarily studied the surface of Mars to probe its geology, history and past habitability, InSight is focused on the red planet's interior, using an ultra-sensitive seismometer and a sophisticated thermometer to map out the sub-surface architecture all the way down to the core 2,000 miles below the landing site.

But science observations are not expected to begin until next spring. First, the Seismic Experiment Interior Structure — SEIS — seismometer, provided by the French space agency, CNES, and the Heat Flow and Physical Properties Probe — HP3 — provided by the German Aerospace Agency, DLR, must be placed on the surface using the lander's robot arm.

Engineers plan to spend weeks photographing the surrounding landscape to identify the best spots near the spacecraft to place the instruments, looking for the smoothest, flattest-possible terrain.

Then, they plan to rehearse operations with InSight's robot arm to make sure every step in the instrument-lowering procedure is well understood. An engineering mockup of InSight is available in a simulated Mars environment at JPL that will be used to test the hardware and software needed to get the job done.

But getting the instruments to the surface is just half the job. The heat probe must then hammer its way into the crust up to a depth of about 15 feet, a procedure that will take still more weeks to complete. Only then will science operations commence.

Bruce Banerdt, the InSight principal investigator, said the seismometer "is really the heart of the InSight mission." It is capable of measuring vibrations that measure less than the width of a hydrogen atom. As seismic waves from marsquakes or meteor impacts travel through the planet, different types of soil and rock will also their shape.

"Scientists understand how to take the shapes of those wiggles, their frequency, their amplitude, the polarization, the timing, all kinds of properties of those waves and pull that information out and finally, after we've gotten many, many marsquakes from different directions, we can put together a three-dimensional view of the inside of Mars," Banerdt said.

The German heat probe will use a spring-driven internal hammer-like device to pound its way down into the martian soil trailing a cable carrying sensitive temperature sensors. After some 10,000 hammer blows, the probe should reach a maximum depth of about 15 feet, pausing along the way to measure the thermal conductivity of the soil at different depths.

By precisely measuring that thermal conductivity, scientists will be able to extrapolate the temperature profile all the way to the core.

While the surface instruments are measuring Mars' internal structure, scientists will be studying the spacecraft's radio signals, noting how the planet's rotation affects them. They hope to use those data to pinpoint the orientation of Mars' polar axis and how it changes over time.

"Over the course of a year, we can watch that north pole wobble just a little bit because of the core sloshing around inside the planet, and that will give us a very, very tight constraint on the size of that core, its density and so its composition," Banerdt said. 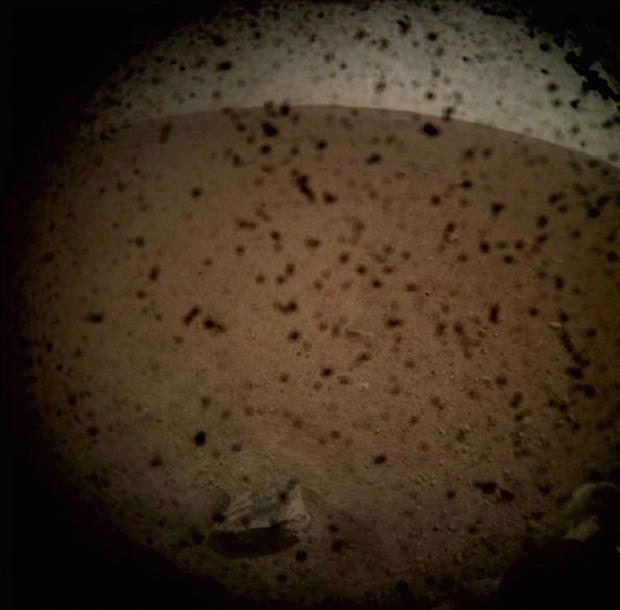 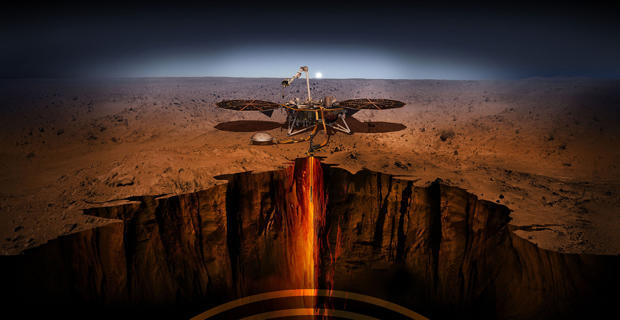