According to online Federal Election Commission records, the "Cindy Hyde-Smith for US Senate" committee reported a $5,000 contribution from the Office of the Commissioner of Major League Baseball on Nov. 23 — more than two weeks after a video surfaced showing Hyde-Smith joking about attending a "public hanging."

"The contribution was made in connection with an event that MLB lobbyists were asked to attend," a spokesperson for U.S. baseball's governing body said in a statement to CBS News. "MLB has requested that the contribution be returned."

A spokesperson for Hyde-Smith's campaign didn't respond to requests for comment on MLB's request.

Hyde-Smith, a close ally of President Trump, is defending her Mississippi senate seat against former Democratic Congressman and Agriculture Secretary Mike Espy in a run-off election on Tuesday. In recent weeks, her campaign has been under increased scrutiny, including from donors, over controversial comments she has made in a race against an African American candidate and in a state with a sordid racial past and a history of lynchings.

On Nov. 11, a video from a public event Nov. 2 surfaced showing Hyde-Smith joking alongside one of her longtime supporters that if he ever invited her to attend a public hanging, she'd sit in the front row. Hyde-Smith and her campaign said the comment was a bad joke, and the Republican senator later apologized.

On Nov. 15, another video surfaced online in which Hyde-Smith said making it more difficult for people to vote is a "great idea." Her campaign said the remark was a joke, but some accused her of supporting voter suppression efforts in the deep South.

Over the weekend, CNN reported, while she was a state senator, Hyde-Smith cosponsored a resolution to honor a Confederate soldier during the Civil War for "defending his homeland" and advocated a revisionist view of the Civil War.

Hyde-Smith will be getting a boost from President Trump on Monday when he joins her at two rallies in the state — one in Tupelo and the other in Biloxi. The commander-in-chief voiced his support for the Mississippi Republican on Sunday afternoon via Twitter.

"Mississippi, Vote for ‪@cindyhydesmith on Tuesday. Respected by all. We need her in Washington!. Thanks!," he wrote. 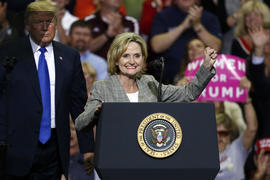