DETROIT — General Motors will lay off 14,700 factory and white-collar workers in North America and consider closing up to five major plants as the auto giant restructures to cut costs and focus more on electric vehicles and autonomous cars. The company-wide restructuring was announced Monday.

GM said it would halt production at three assembly plants: Lordstown Assembly in Warren, Ohio; Detroit-Hamtramck Assembly in Michigan and Oshawa Assembly in Ontario, Canada. It also plans to close transmission plants next year in White Marsh, Maryland, and Warren, Michigan, the company said in a news release.

"The actions we are taking today continue our transformation to be highly agile, resilient and profitable, while giving us the flexibility to invest in the future," GM Chairman and CEO Mary Barra said in a statement that projected $6.5 billion in cost cuts in 2018. "We recognize the need to stay in front of changing market conditions and customer preferences to position our company for long-term success."

The reduction includes 8,100 white-collar workers, some of whom will take buyouts and others who will be laid off. Most of the affected factories build cars that won't be sold in the U.S. after next year. They could close or they could get different vehicles to build — decisions that ultimately will be part of contract talks with the United Auto Workers union next year.

More than 6,000 factory workers could lose jobs in the U.S. and Canada, although some could transfer to truck and SUV plants.

"The total number of hourly employees affected is approximately 6,000," a GM spokesperson emailed. "However, many of those could be reassigned to other plants. There will be a number of retirements, layoffs and work reallocations associated with these actions."

"Additionally, there are 54,000 salaried employees in GM North America today. 15 percent of that gives you approximately 8,000," the spokesperson added.

The GM announcement will more than double the number of job cuts announced by U.S. companies in the auto industry in 2018, according to tracking by global outplacement and executive coaching firm Challenger, Gray & Christmas.

GM, the largest automaker in the U.S. and includes the Chevrolet, Buick, Cadillac and GMC brands, said the moves will save $6 billion in cash by the end of next year, including $4.5 billion in recurring annual cost reductions and a $1.5 billion reduction in capital spending.

In October, GM offered buyouts to 18,000 white-collar workers as part of a cost-cutting initiative. The company said it is aiming to save $6.5 billion in "cost efficiencies" through 2018. GM has yet to say how many workers accepted buyouts, or if it's close to meeting the staff reduction goals it set to better withstand leaner times.

GM in recent years has worked to slice costs, with a goal of $6.5 billion in cuts this year alone. The company has scaled back production at its plants, with its hourly workforce down by 4,000 people in 2017, according to GM's annual report. The automaker in June ended the second shift at its factory in Lordstown, Ohio, cutting 1,500 workers.

The company's main competitor, Ford, said earlier this month that it would reduce its salaried workforce by the second quarter of 2019.

The Monday closure of GM's plant in Oshawa, Ontario, was first confirmed late Sunday by the Associated Press, which cited an official familiar with the decision. The official spoke on condition of anonymity because they were not authorized to talk publicly ahead of the announcement.

GM needs to reshape the company as it shifts its focus to lower-emitting hybrid vehicles, technology that is not at the forefront at the Canadian plant.

Too many GM factories are devoted to making slow-selling cars and the company can no longer afford to keep them all operating without making some tough decisions. But the political atmosphere might limit realistic choices for the Detroit automaker.

Industry analysts are already plotting out possible targets for GM, including its sprawling Lordstown plant in northeastern Ohio. The car produced there is also is built in Mexico. The once-bustling factory already has lost two of its three shifts and 3,000 union jobs since the beginning of last year.

But moving that car, the Chevrolet Cruze, south of the border brings the risk of provoking a backlash from President Donald Trump. And GM also isn't sure whether he'll make good on threats to impose 25 percent tariffs on vehicles imported from Canada and Mexico.

What's more, the Cruze plant just outside Youngtown is in a Democratic and labor stronghold, where Trump won over a surprising number of voters two years ago by reaching out to what he called America's "forgotten men and women."

At a rally near the plant last summer, Trump talked about passing by big factories whose jobs "have left Ohio," then told people not to sell their homes because the jobs are "coming back. They're all coming back."

GM opened its factory in Oshawa, near Toronto, in 1953. The plant is used to make the Cadillac XTS and Chevrolet Impala sedans as well as the Chevrolet Silverado and GMC Sierra trucks.

A GM spokesman declined to comment. GM had been expected to close plants because of struggling sales.

Unifor, Canada's largest private sector union, said in a prepared statement that it does not have complete details of Monday's announcement, but it has been informed that there is no product allocated to the Oshawa plant past December 2019.

"Based on commitments made during 2016 contract negotiations, Unifor does not accept this announcement and is immediately calling on GM to live up to the spirit of that agreement," the union said in a statement on its website. "Unifor is scheduled to hold a discussion with General Motors (Monday) and will provide further comment following the meeting."

Oshawa Mayor John Henry said he had not spoken to anyone from GM. Jennifer French, who represents Oshawa in the provincial legislature, said she finds the news "gravely concerning."

"If GM Canada is indeed turning its back on 100 years of industry and community — abandoning workers and families in Oshawa — then this is a callous decision that must be fought," she said in a statement. 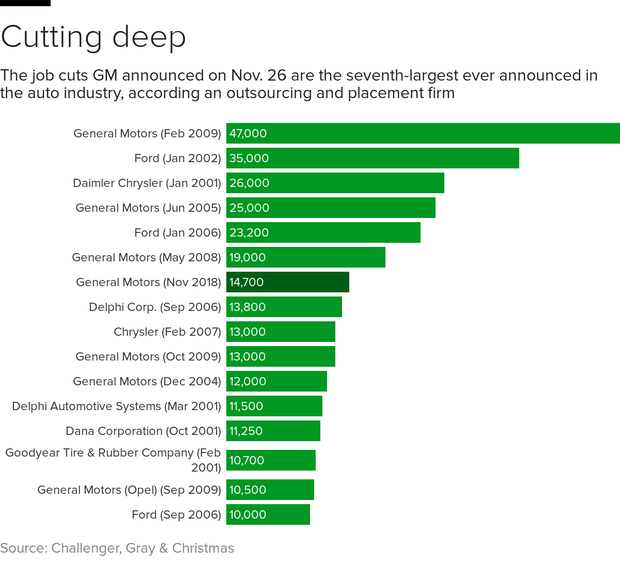 How does federal judges’ health insurance stack up?