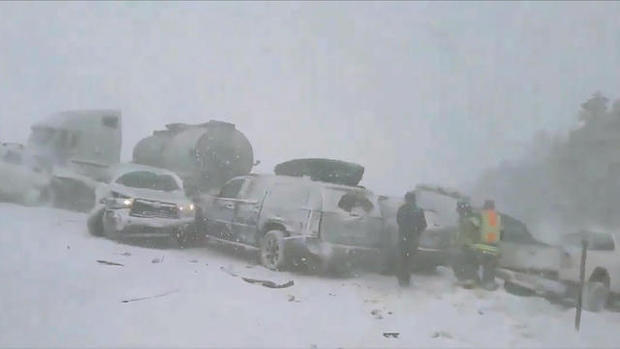 Heavy snow and strong winds are expected to hit the Great Plains into the Midwest for Sunday, one of the busiest travel days of the year. There could be snow blowing with winds up to 35 mph and visibility of less than a quarter-mile, CBS Boston meteorologist Jacob Wycoff said.

The storm could bring between 6-12 inches of snow through the central Plains states, including areas with major roads such as I-80 through Des Moines and I-70 through Kansas City. Chicago, a major travel hub, is under a winter storm warning, with the storm expected to reach it at 6:30 p.m. Sunday.

Snow already hit Colorado, where accidents and poor road conditions caused by heavy show and high winds led to several closures along Interstate 70 through central Colorado, the main thoroughfare to some of the state's biggest ski resorts.

The Colorado Highway Patrol said a 20-vehicle pileup, including a jackknifed semi-trailer closed the eastbound lanes near Frisco at about 1 p.m. Saturday. Minor injuries were reported.

The Department of Transportation closed the eastbound lanes of I-70 near Vail Pass due to hazardous road conditions. Colorado State Patrol said the truck was leaking fuel, CBS Denver reports.

Major crashes were reported west of Silverthorne and east of Frisco.

Dozens of stranded motorists waited for hours until crews could clear the mess at mile marker 204, CBS Denver reports. The crash was cleared at around 4 p.m., however eastbound lanes were still closed at Frisco and Silverthorne because of other crashes, highway patrol said.

CSP advised those drivers to head to the Silverthorne Recreation Center on Rainbow Drive or Summit Middle School in Frisco to help reduce traffic back ups.

A winter storm warning was in effect for the area through 5 a.m. Sunday. The National Weather Service forecast up to 16 inches of snow with wind gusts up to 50 mph, causing bitter cold wind chills and whiteout conditions. 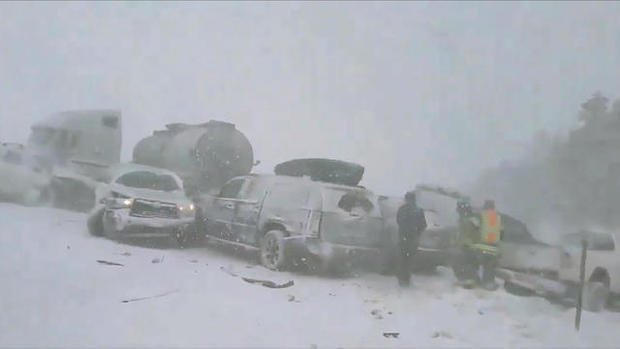 Louisville airport to be renamed after Muhammad Ali