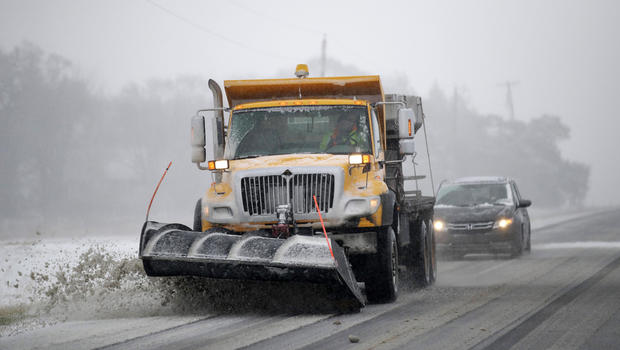 BOSTON — On the busiest travel day of the holiday weekend, blizzard warnings stretch through the heart of the country from the Great Plains to the Great Lakes. Hundreds of flights have been canceled or delayed Sunday, while motorists found major highways closed. But snow isn't the only threat; powerful wind advisories are posted from Texas to Illinois.

In Kansas, the governor declared a state of emergency ahead of whiteout conditions, according to CBS affiliate KCTV. There were more than 14,000 residents without power, KCTV reports, and the station said the University of Kansas has canceled Monday's classes.

"It's going to be messy," said Todd Kluber, a meteorologist for the National Weather Service who is based in suburban Chicago.

With much of the central plains and Great Lakes region under blizzard or winter storms warnings, some 1,040 flights headed to or from the U.S. had been canceled as of 5 p.m. Sunday, according to the flight-tracking website FlightAware.

Most were supposed to be routed through Chicago or Kansas City — areas forecast to be hit hard by the storm.

Strong winds and snow created blizzard conditions across much of Nebraska and parts of Kansas, Iowa and Missouri. The National Weather Service was warning those conditions would make travel difficult in places.

By mid-day, the blizzard warning was extended to parts of the eastern Illinois near Chicago, where snow is forecast to fall at a rate of about 2 inches per hour.

Other parts of central plains and Great Lakes region were under a winter storm warning, that could see a foot or more of snow dumped in some places by the end of the day.

In eastern Nebraska, part of Interstate 80 between Lincoln and Omaha was closed Sunday morning because of multiple accidents after snow blanketed that area. That included semitrailer trucks jackknifed across the highway. It was re-opened by Sunday afternoon.

Separately, a portion of Interstate 29 was shut down in Missouri, near the Iowa border.

As much as a foot was expected in Chicago. Between 4 to 6 inches of snow was expected in the Kansas City area. Forecasters predict more than a foot of snow is likely in southeast Nebraska, northeast Kansas, northwest Missouri and southwest Iowa.

By Monday morning, the storm was expected to hit parts of northern Indiana and southern Michigan.

Kluber said the storm was expected to hit the Chicago region sometime Sunday evening. He said rain will give way to heavy snowfall and "near whiteout conditions" that will make for dangerous travel.

For Jake Elliott, his flight scheduled to leave from Chicago to California was a concern.

"It sounds like the worst we are going to get in a while," Elliott told CBS Chicago. "I've lived here for 10 years before I went off to college and when we heard 4 to 10 inches, we called the airline immediately."

While some O'Hare travelers are waiting in long security lines, others are stuck and the airport and forced to make adjustments to their plans. 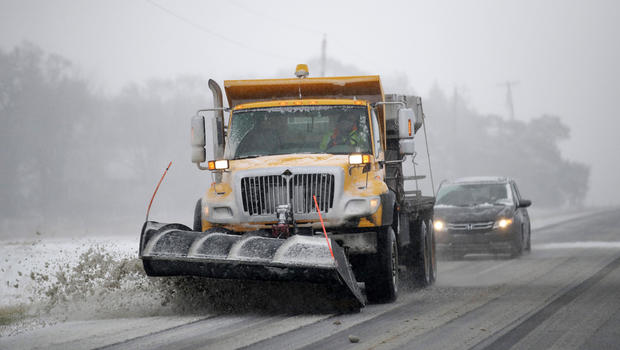 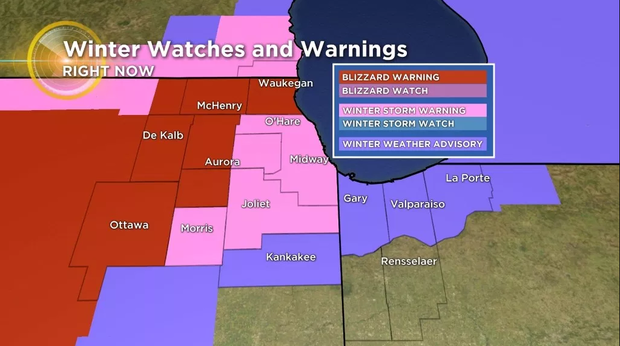